80% of the World’s Displaced People are in Africa: According to GRID 2019 Report

The newly released Global Report on Internal Displacement 2019 (GRID 2019) show that the number of internally displaced persons (IDPs) is at an all-time high.

According to the report put out by the Internal Displacement Monitoring Centre, there are 9.3 million IDPs in the world.

It indicates that this is due to conflict and disasters across 148 countries. Majority of these displaced people can be found in Africa. 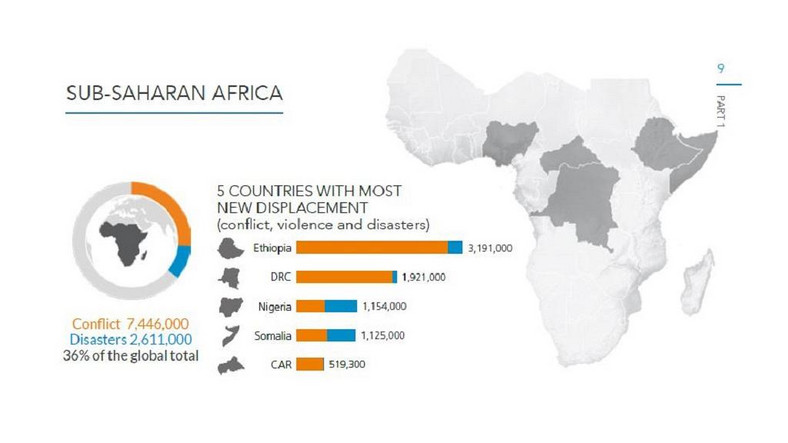 The world’s second largest and second most-populous continent (Africa) had over 7.1 million people (80 per cent) out of the total 9.3 million displaced people by the end of 2018.

These 7 African countries have the world’s highest level of displaced people:

Number one on the global list is Ethiopia which had 2.9 million internally displaced people in 2018 alone. This has been attributed to violent communal clashes, serious drought and starvation that have forced millions to flee their homes.

The report read in part: “ Ethiopia had the highest figure, with 2.9 million new displacements, a considerable increase that influenced global trends.”

Moye, Oromia, Somali, Benishangul-Gumuz and Jijiga are the most affected areas. 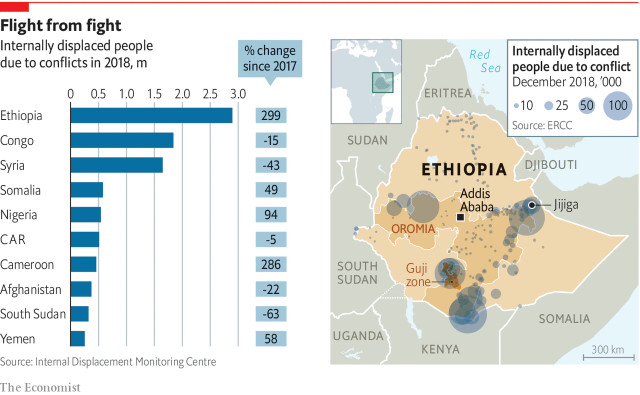 Second on the list is this Central African country which has moved up from its third position in the previous 2018 report. Now, there are 1.8 million fresh IDPs as a result of the political tension and ethnic fights.

Third in Africa and fourth in the world after Syria is Somalia with 578,000 displaced people. The numerous conflicts, explosions and other issues are all to blame for this.

Ths West African country is next on the top ten list with 541,000 IDPs displaced by Boko Haram and natural disasters.

The report read, “ Ongoing conflict in north-eastern states and new conflict between herders and farmers over scarce resources in the Middle Belt led to 341,000 and 200,000 new displacements, respectively.”

“Thirty-four of Nigeria’s thirty-six states were also affected by flooding as the banks of the Benue and Niger rivers burst, triggering 600,000 new displacements and submerging thousands of homes.”

The Central African Republic takes the sixth position with 510,000 displaced people. This is due to its ongoing internal conflict which the government is trying to resolve by signing peace deals with armed groups.

Cameroon is next with 459,000 displaced people. Ongoing conflicts between the English and French-speaking regions have resulted in an increase in the number of people seeking refuge here.

South Sudan is the last African country on the top 10 list. It has 321,000 displaced people as a result of the South Sudan civil war which started over five years.

The Lukasa is a memory device that was used by the Luba people of the Democratic Republic of Congo for record keeping.
Religion

Chief Anthony Enahoro, the Parliamentarian Who First Moved the Motion for Nigeria’s Independence in 1953

Captain Tomba, the African Chief Who Was Sold Into Slavery for Refusing to Participate in Slave Trade