Nigerian Scientist Builds Computer That can Sniff Out Explosives

A Nigerian scientist may well be on the path to revolutionizing the computer industry after successfully building a model of computer processors using biological neurons instead of the traditional silicon chips. 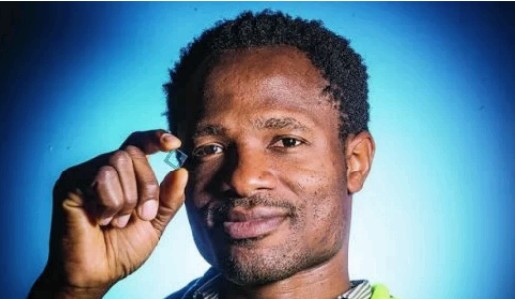 ​
Oshiorenoya Agabi, 38, has built a computer processor which can be best described as a fusion of biology and electronics. According to BBC, the modem-sized device, which he dubbed “Koniku Kore” could provide the brain for future robots.

Agabi says he hopes to build computers that can simulate human intelligence. He asserts that while computers excel at complex mathematical calculations, the human brain is far superior at cognitive functions like particle detection or sophisticated climate modelling. He says he is integrating lab-grown neurons with silicon chips in a bid to make them much more powerful than the standard computer processor.

Artificial Intelligence or Deep Learning is the rave of the moment and many tech giants like Microsoft, Google and Facebook are committing resources to developing computer models that can mimic the working of the human brain.

Biology is technology. Bio is tech. Our deep learning networks are all copying the brain,” Agabi

He says the system has already been trained to recognise the smell of explosives and could eventually replace traditional airport security.

“You can give the neurons instructions about what to do – in our case we tell it to provide a receptor that can detect explosives.

​
“One of the problems that plague us right now is security. Explosives have particles and smells coming off the individual and with our device you can tell, without requiring line of sight or contact, you can scan them at the time at a place of your own choosing and you can get into an aircraft and go about your business.”
The model also holds a lot of promise in the medical field, where experts hope it could improve brain function, particularly for those with brain-related conditions like paralysis.

Agabi recently showed off a prototype of his device during his presentation at the ongoing 2017 TEDGlobal Conference in Arusha, Tanzania.

Born and raised in Lagos, Nigeria, Agabi obtained a Bachelor degree in Physics from the University of Lagos. He then travelled to Sweden and Switzerland to further his studies in physics and neuroscience.

A year ago, Agabi launched his start-up Koniku, which he describes as the world’s first Neurocomputation company. The company has so far raised $1m (£800,000) in funding and it has already signed a number of profit making deals withIN the security industry.