A teacher in South Africa has been suspended “with immediate effect” after a photo emerged of her pupils sitting in racially separate groups. 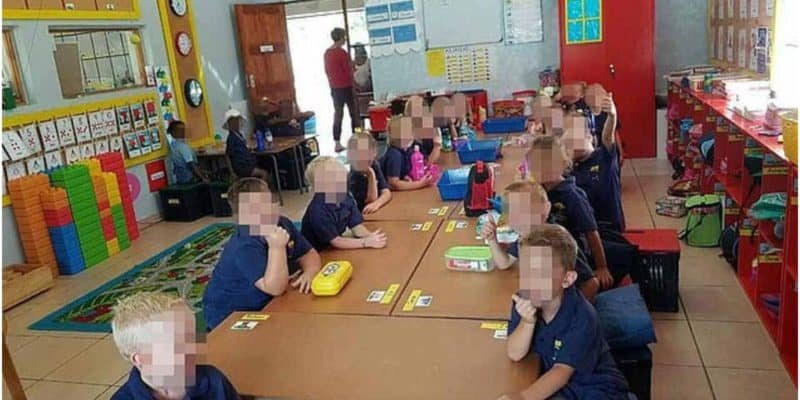 A black parent told the TimesLive news site that she thought her child’s first day at school in had got off to a good start until she saw the image.

“This was meant to be an exciting day for me, but it’s not,” she said.
Local authorities say they “highly condemn” the incident and have removed the teacher “pending investigation”.

The BBC’s Milton Nkosi in South Africa says Schweizer-Reneke is conservative rural town with a population of just under 50,000, surrounded by a farming community made up of mainly white Afrikaners.
Sello Lehare, the education minister for the North West province, said the school’s explanation was that “the learners were separated according to those who could understand Afrikaans and English”.

He added: “We are suspending her [the teacher] because we want the investigation to be fair and free”.

What happened at the school?

Parents had dropped their children off on Wednesday morning for their first day of school at Schweizer-Reneke primary school.

Apparently to reassure parents that all was going well, the class teacher reportedly shared a photograph of the children to the school’s private WhatsApp group.

When parents then complained to the school, according to TimesLive, they were sent a different picture after the children’s break showing that they had been “moved to different seating spaces to ensure they were not separated according to race”.

What has the response been?

Protesters gathered at the school on Thursday morning, many of whom are supporters of South Africa’s opposition EFF party according to local media.

Some white parents have removed their children from the school because they fear for their safety.

Provincial education minister Sello Lehare was despatched to the school in the small town of Schweizer-Reneke on a fact-finding mission, the BBC’s Milton Nkosi says.

After meeting school staff and education department officials, Mr Lehare confirmed that the form teacher in question had been suspended.

“As government, we would like to condemn any form of racism, alleged or not, and we deeply regret this unfortunate incident taking place in our country 25 years into democracy,” said a spokesperson for the local government leader, Job Lekgoro.