During the late 1800s, 19th and early 20th centuries, the shocking display of human beings of various African ethnicities was in vogue in the West, especially in the colonial empires of Great Britain, France, and Germany. 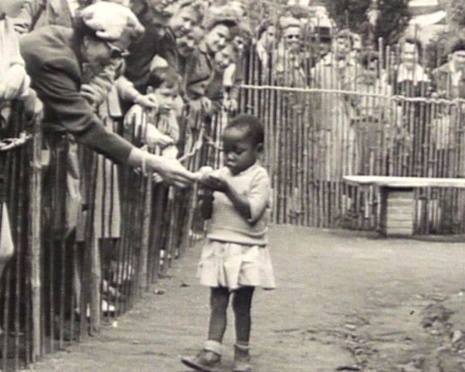 In the era before cinema, these displays – human zoos) allowed westerners to see the foreigners – or as they were popularly called then ‘exotic peoples‘ – they’d only heard of from explorers. These displays later became so popular that they attracted thousands of people every day.

The performers were given costumes to wear as they performed non-stop for the audience: Terrible living conditions, foreign diseases, and the cold killed dozens of the performers, who were then buried in the gardens.

Human Zoos started During the Age of Exploration, then Spanish and Portuguese explorers would often bring back foreign plants, animals, and even people, to prove that their voyages to Africa were a success and not a facade. These displays, however, were accessible only to the elites, as they were only exhibited at the royal courts.

As the European powers began to establish colonies across the world, especially in Africa, there was growing appetite among westerners back home for displays of the conquered peoples, who were perceived as savages and less civilized than themselves.

This huge demand led to the establishment of the first human zoos’ native villages were featured at most international fairs and expositions held during that period.

This Shows and exhibitions held across the Western world and were designed to emphasise the cultural difference between Europeans and people who were deemed primitive. 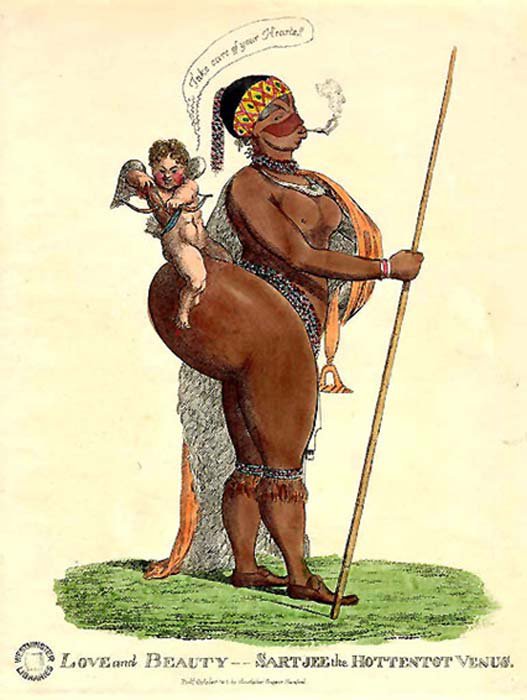 A caricature of Saartjie Baartman, Born to a Khoisan family, she was displayed in London in the early 19th century. 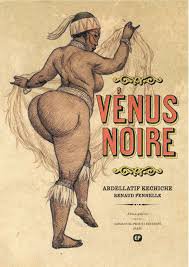 Sara Baartman’s large buttocks and unusual colouring made her the object of fascination by the colonial Europeans who presumed that they were racially superior.

Englishmen and women paid to see Sara’s half naked body displayed in a cage that was about a metre and half high. She became an attraction for people from various parts of Europe.

In September 1814, she was transported from England to France, and upon arrival was sold to a man who showcased animals. 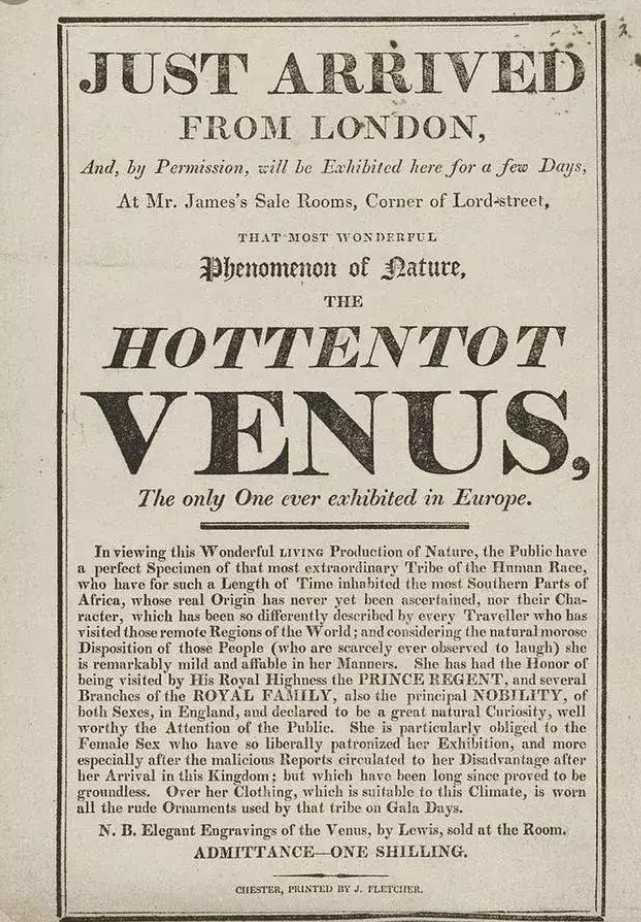 He exhibited her around Paris and reaped financial benefits from the public’s fascination with Sara’s body.

At a point he began exhibiting her in a cage alongside a baby rhinoceros.

Her “trainer” would order her to sit or stand in a similar way that circus animals are ordered.

At times Baartman was displayed almost completely naked, wearing little more than a tan loincloth, and she was only allowed that due to her insistence that she cover what was culturally sacred. She was nicknamed “Hottentot Venus”.

Sara Baartman died in France in 1816 at the age of 26. But even death couldn’t stop the French from displaying her.

After her death, George Cuvier, a naturalist dissected her body. He made a plaster cast of her body, pickled her brain and genitals and placed them into jars which were then placed on display at the Musée de l’Homme (Museum of Man) until 1974.

Her remains remained in France until the South African government negotiated their return in 2002.

Her body was finally brought to South Africa where she was buried On 9 August 2002, the ceremony coincided with national Women’s Day.

Hundreds of people attended the funeral in the rural town of Hankey, about 470 miles east of Cape Town, where Baartman was born in 1789. 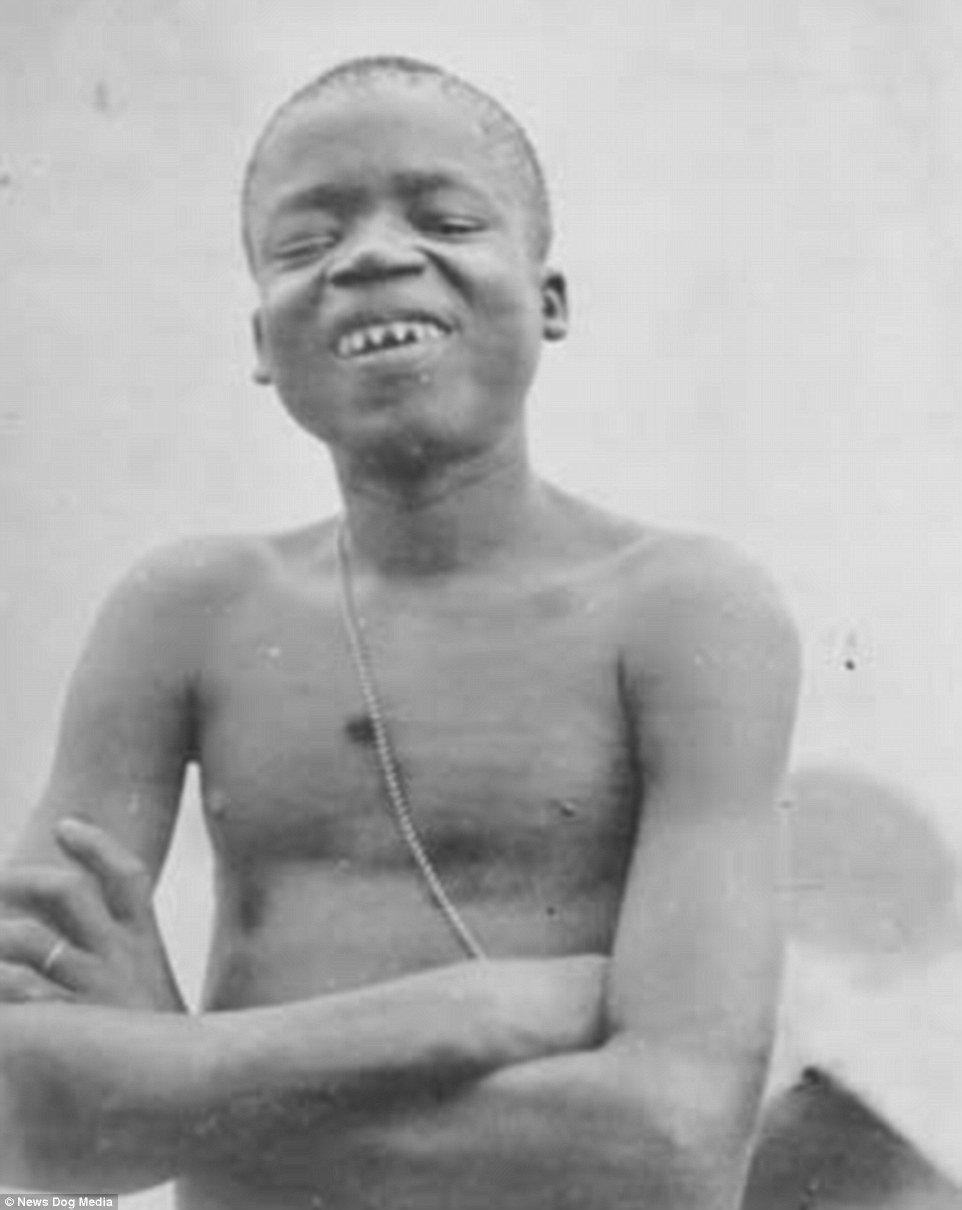 Ota Benga (pictured above), a Congolese man exhibited in the New York’s Bronx Zoo in 1906. He was often subject to mocking from the crowd

His teeth were filed to points, as was customary in his tribe, and the floor of his cage was littered with bones placed there by zookeepers to make him look more threatening. He played the role of the savage and in time was displayed in a cage with apes. 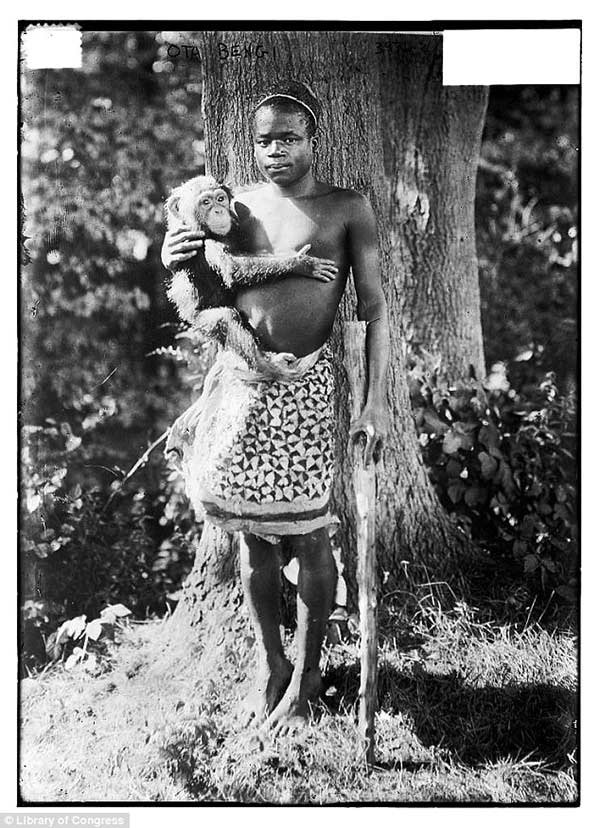 More than 40,000 people came to see him every day and he was often subject to mocking from the crowd. 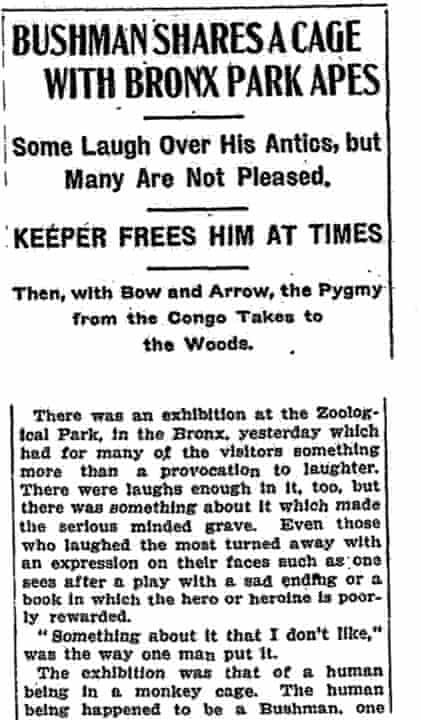 The continued exhibit of Ota Benga sparked growing concern and then outrage, alarms were sounded at the Colored Baptist Ministers’ Conference, and a number of prominent pastors were outspoken about what they viewed as a monstrous disrespect. Rev. James H. Gordon, superintendent of the Howard Colored Orphan Asylum in Brooklyn was one of the most vocal opponents of the exhibit. “Our race, we think, is depressed enough, without exhibiting one of us with the apes,” he wrote. “We think we are worthy of being considered human beings, with souls.”

Ota Benga was eventually released. But six years later In 1916, he he tragically shot himself in the heart. after being unable to assimilate into American life. 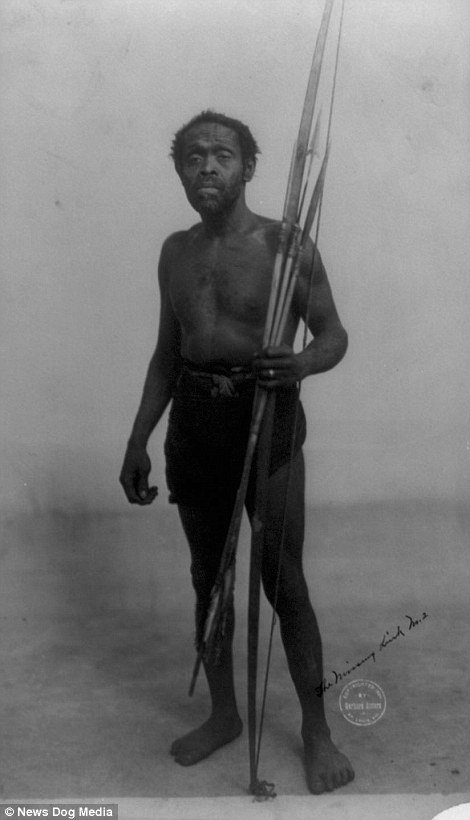 Unidentified African man displayed as an exhibit at the 1904 St. Louis World’s Fair in Missouri, USA

A small African girl in western dress. She’s fed by a white woman as others watch in amazement.

The African girl above was shown at the 1958 Expo in Brussels, Belgium. The exhibition featured a ‘Congo Village’ with visitors watching her from behind wooden fences. 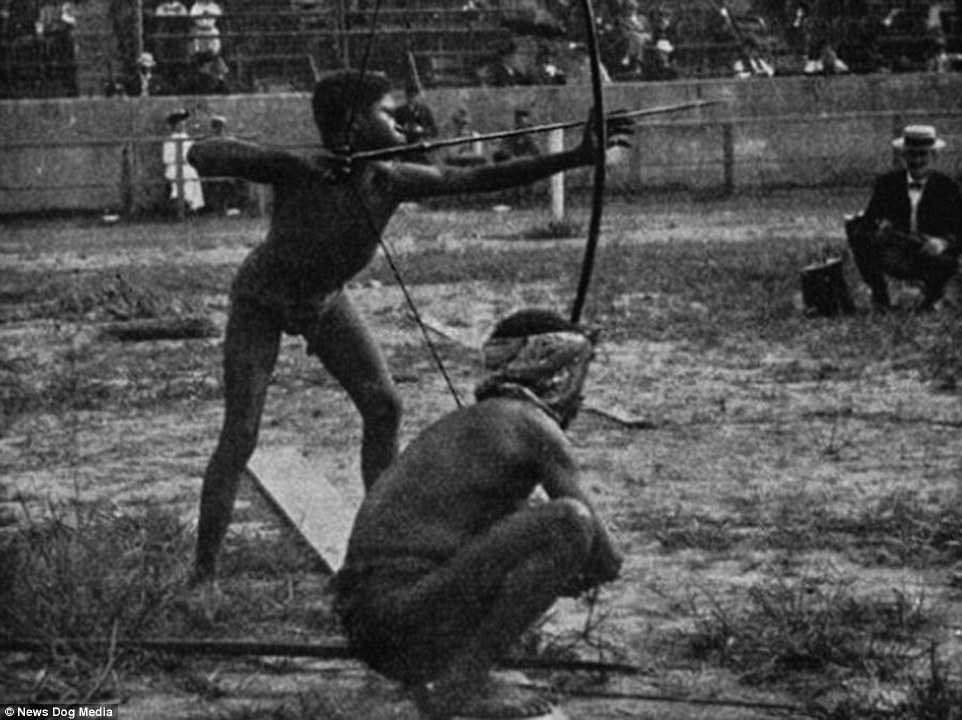 The image above, displays indigenous African people participating in archery in 1904 in St Louis, Missouri, USA at an event shockingly named the ‘Savage Olympics Exhibition’. 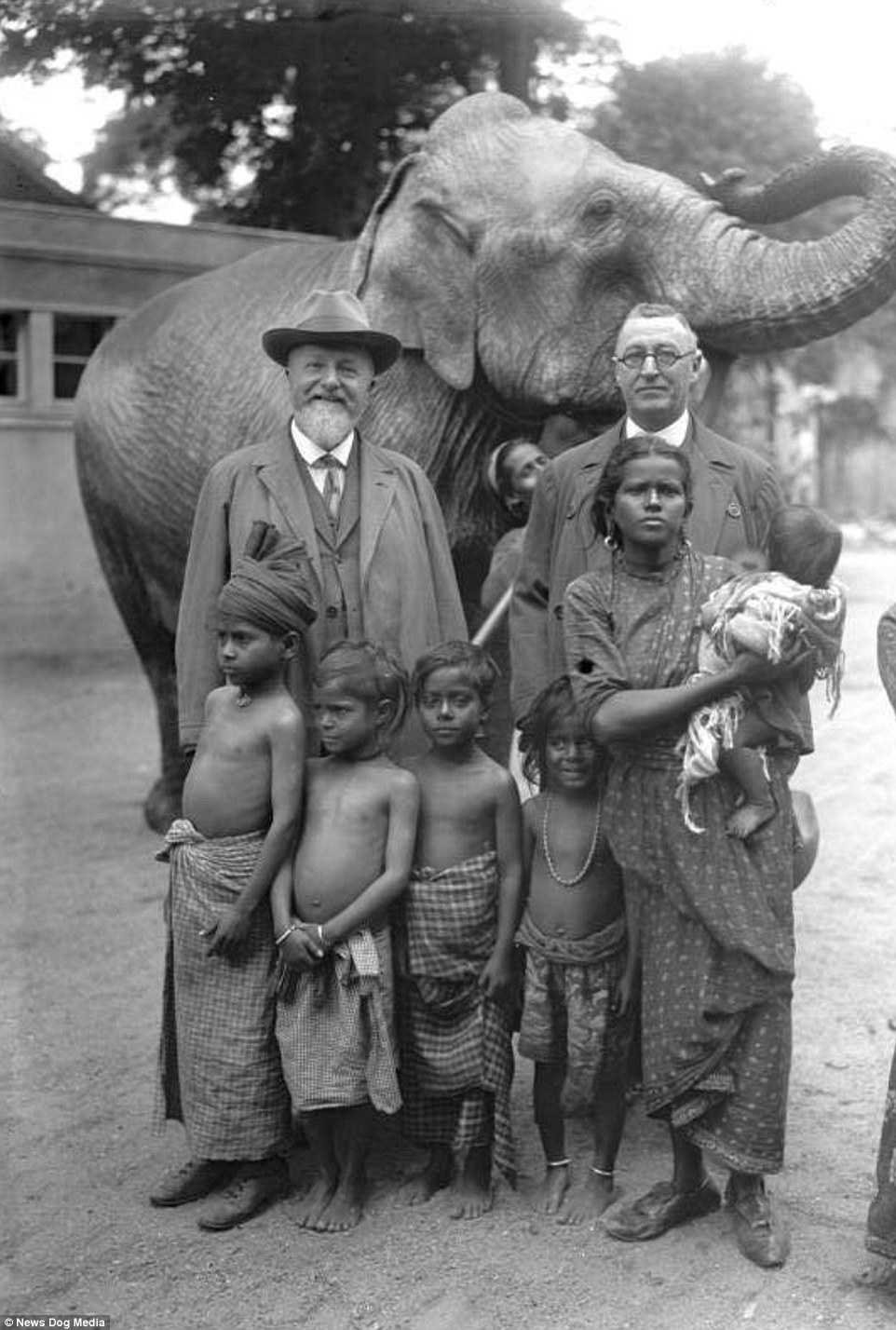 German zoologist Professor Lutz Heck (left) is pictured above with an elephant and an African family he brought to the Berlin Zoo, in Germany in 1931. 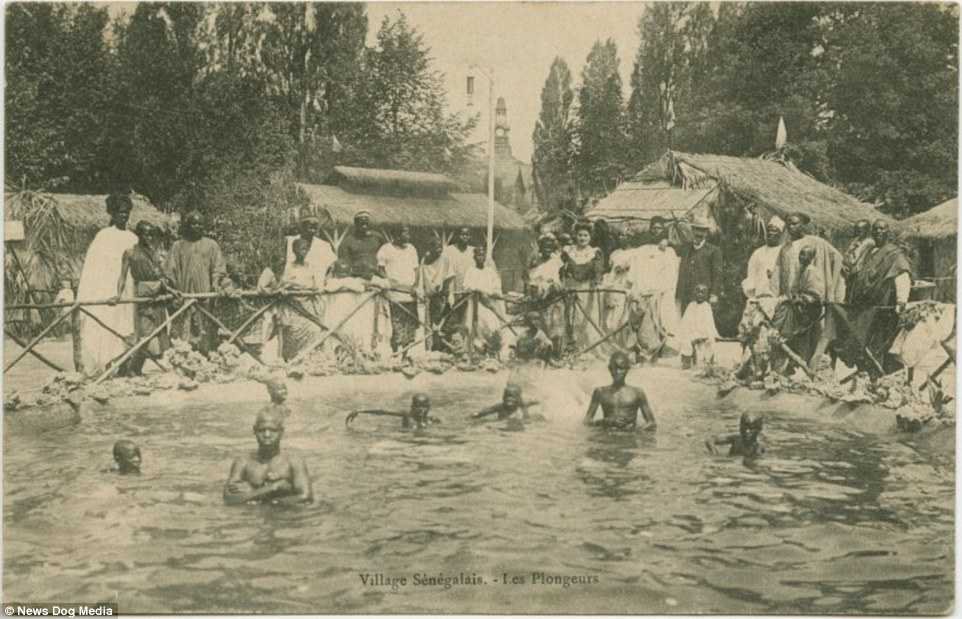 The World’s Fair in Brussels, Belgium in 1958 featured this mocked-up Senegalese village

The End of Human Zoos

Human zoos began to lose their popularity as the 20th century progressed. One of the last instances of the phenomenon occurred in 1958, at the World’s Fair in Brussels, Belgium where a Congolese Village was featured.

Although it was said that towards their end, human zoos were criticized as degrading, racist, and unethical, and that was what led to their demise. It is still believed by many that the only thing that caused the ‘human zoos’ to lose its appeal was the appearance of motion pictures. Apparently it drew the masses away from these zoos and into the cinemas.