8 African Countries Where Homosexuality is Illegal

According to the World Economic Forum, there are 73 countries where homosexuality is a criminal offence. And many of these countries are in Africa… In some African countries, sexual activity between two consenting adults of the same sex is punishable by death. 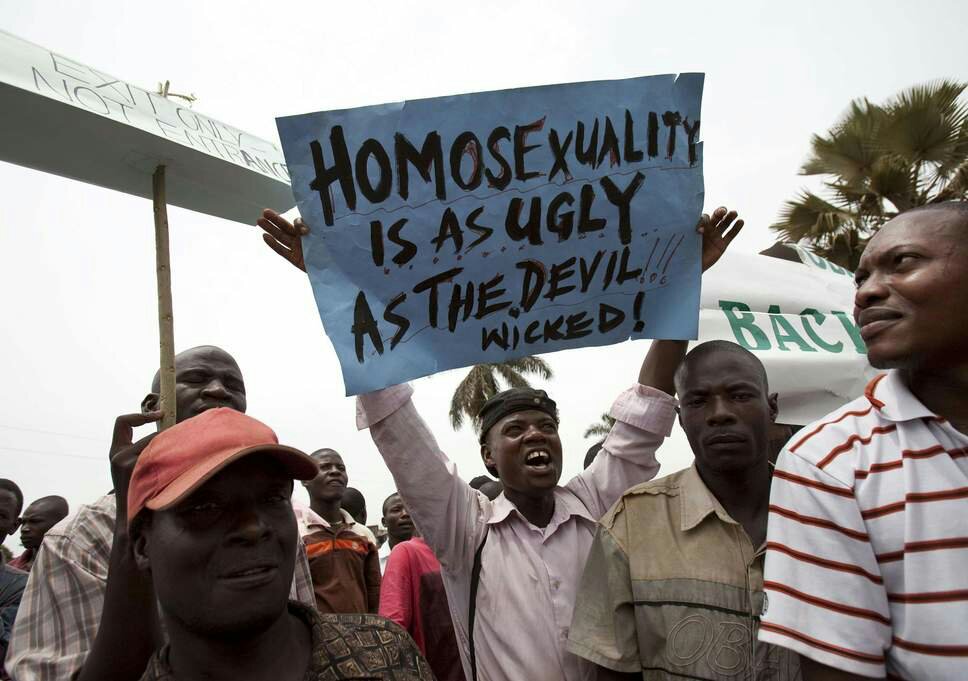 Some countries only criminalize sex between men but a growing number have recently expanded their laws to include bisexual and lesbian women.

In some African nations where homosexuality has been criminalized and those where it has been decriminalized, LGBTI people face violence, arbitrary arrest, imprisonment and torture, according to Amnesty International.

Here’s 8 African countries where homosexuality is Banned.. Simply put. Dont be gay (if there’s such a thing) in any of these countries.

In 2014, Nigerian President Goodluck Jonathan signed the Same Sex Marriage Prohibition Act. After this, a March 2018 report by The Guardian noted that raids on establishments frequented by the gay community became a common occurance.
A raid in Club Owode in Lagos in 2017 saw 70 men and boys arrested. “In the majority of these cases the police extort funds from them,” activist Daniel Okoye told The Guardian. “For most of them, their single wish is to pay and get out, and the police use that against them.”

Sudan is guided by its 1991 penal code in its efforts against same-sex relationships. The harsh penalties recommended by the code include life in prison and even death. Human Rights Watch says the “restrictions severely impede the ability of groups who work on LGBT issues to register as NGO’s.”

Homosexuality is not technically illegal in Egypt. But Egyptian authorities are cracking down on the LGBT community , its supporters, and advocates for social liberalization more broadly.

After six men were arrested for “promoting sexual deviancy” and “debauchery”, Amnesty International’s Bounaim said: “The fact that Egypt’s Public Prosecutor is prioritising hunting down people based on their perceived sexual orientation is utterly deplorable.”

In August, a physician spoke to NBC News under the fictitious name ‘Omar’. “It’s difficult to be gay in Egypt. If you’re out, you can be subjected to discrimination, abuse, being arrested, having forced physical examinations or being sentenced to time in jail.”

People found to be in same-sex relationships in Uganda can spend as much as seven years in prison, according to Amnesty International. The legislative framework for Uganda’s anti-gay mission is the Anti-Homosexuality Bill, which makes provision for sentences for homosexual sex and promoting sexuality.

Same-sex sexual activity is proscribed by Cap. 87, Sections 155 through 157 of the country’s penal code.
Section 155 (“Unnatural Offences”)of the act classifies homosexual sex described as “carnal knowledge of any person against the order of nature”) as a felony punishable by imprisonment for 14 years.
Attempt to commit homosexual act is also punishable.

An attempt to commit sodomy is also criminalized and is punishable on conviction by a minimum of twenty years of imprisonment.

Formerly a colony of the British Empire, Zambia inherited the laws and legal system of its colonial master upon independence in 1964. Laws concerning homosexuality have largely remained unchanged since then.

According to this law, anyone who “has carnal knowledge of any person against the order of nature…or permits a male person to have carnal knowledge of him or her against the order of nature” commits a crime, and on conviction is punishable by fourteen years to life in prison. Attempt, which is also a crime, is punishable on conviction by a seven- to fourteen-year prison term.

Before Mauritanian became independent in 1960, punishment for homosexual activity was limited to a maximum of three years in prison or a fine a of one million francs.

This old law was replaced by sharia law which was established around 1980.

The new sharia law sees sodomy as a crime against the Koran’s teachings and male Muslims convicted of homosexual acts are eligible for the death sentence.