Abushiri, was a wealthy merchant and slave-owning plantation owner who is known for Revolting against the German East Africa Company in present-day Tanzania. 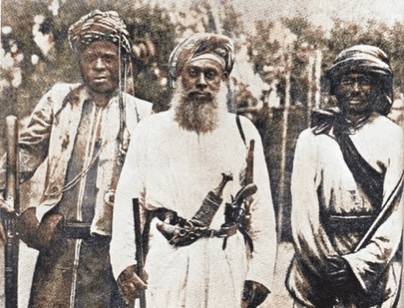 Born in 1840 to an ethnic Arab and an Oromo native, Al Bashir ibn Salim al-Harthi also known by the name Abushiri was a slave and ivory trader who is known for leading a revolt against german trading company in present-day Tanzania.

In late 1884, an expedition of the Society for German Colonization, led by Carl Peters also known as “hangman peters”, arrived the shores of Zanzibar from germany, his goal was simple, acquire territories for germany.

On arrival, Peter made the local chiefs on the mainland sign treaties bequeathing vast area to his organization. Once it had gained a foothold, Peters’ new German East Africa Company acquired further lands in Tanganyika using every trick in the book including force.

From August 1888, Peter’s new German East Africa Company tried to take over the coastal towns of Tanganyika against the fierce resistance by the Arab elite. His continuous attempts eventually sparked the Abushiri uprising.

The Abushiri Revolt was led by Abushiri, who gained the support of both the Arabs of the area and local Swahili tribes.

Beginning on September 20, 1888, his forces attacked German-held trading posts and towns throughout the East African territory. Representatives of the German East Africa Company were also expelled or killed. The rebellion soon spread all along the coast from the town of Tanga in the north to Lindi and Mikindani in the south.

The German trading company, unable to control the uprising appealed to the government in Berlin for assistance.

In response to Peter’s appeal, the German government of Chancellor Otto von Bismarck dispatched Lieutenant Hermann Wissmann to the colony.

Wissmann along with a combination of German and African askari soldiers whom he hired in Egypt and Mozambique formed the core of the first colonial troop in the region. With naval assistance they bombarded coastal towns which allowed for German re-occupation. Also the Navy set up a blockade to deny shipments of arms and supplies to reach the rebels.

Al Bashir’s forces were able to capture most of the towns along the Tanganyika coast and even took the explorers Hans Meyer and Oscar Baumann hostage. Nevertheless, towards the end of 1888, much of his alliance with the local tribes had collapsed, and he was forced to hire Arab mercenaries to defend his stronghold at a fortress near Bagamoyo. After Abushiri accepted a truce with the Germans, troops led by Wissmann attacked the fortress on May 8, 1889, resulting in 106 Arab deaths. Abushiri escaped and was able to persuade members of the Mbunga tribes to continue with the rebellion. He was then able to lead new assaults on Dar es Salaam and Bagamoyo. However, superior German firepower was able to repulse these attacks, and the African tribesmen soon deserted Abushiri.

Abushiri, on his flight to Mombasa, was eventually caught by an African head hunter and handed to the Germans in December 1889.

Abushiri was sentenced to death in a court-martial and publicly hanged in Pangani.

After crushing the revolt in 1890, the German East Africa Company took over Tanganyika and would eventually hand over its administration to the German government who then went ahead to administer the region.

Previous articleTimothy Meaher, the Man Who Smuggled the Last Enslaved Africans Into the United States
Next articleCaptain Tomba, the African Chief Who Was Sold Into Slavery for Refusing to Participate in Slave Trade