On This Day in 1976, African Nations Boycotted the Montreal Olympics, Choosing Principles Over Medals

On this day in 1976, 22 African countries, boycotted the Montreal Olympics when the International Olympic Committee (IOC) refused to ban New Zealand, whose Government had permitted sports relations with South Africa despite the country’s racial segregation policy of apartheid and race riots.

In protest against the ongoing All Blacks’ tour of apartheid-era South Africa, the African nations demanded that the International Olympic Committee (IOC) exclude New Zealand from the 1976 Montreal Olympics.

In 1976, the New Zealand’s All Blacks had toured South Africa in defiance of a widely observed international athletics embargo on the country. Enraged, African nations threatened to boycott Montreal if the tour went ahead. In their view the All Black tour in Mzansi gave tacit support to the apartheid regime in South Africa (the country did not compete at Olympic Games from 1964 to 1988, as a part of the sporting boycott of South Africa during the apartheid era, and was outright expelled from the International Olympic Committee in 1970).

A month earlier, South Africa’s government had massacred over 300 anti-apartheid protestors most of whom were secondary school students during the infamous Soweto protests.

The boycotter’s message was made perfectly clear: it was unacceptable for any country or any international sporting organization to legitimize the South African government in any way as New Zealand’s rugby team had done, and, they believed, as the IOC was doing by refusing to exclude New Zealand from the games. 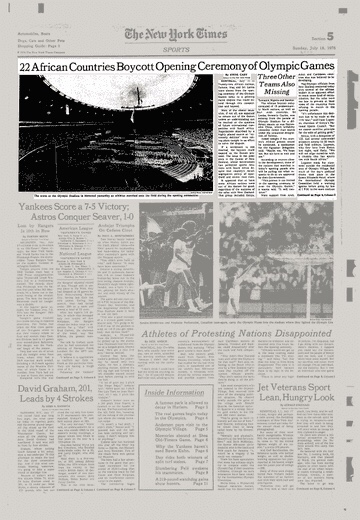 When the New Zealand tour continued, the African Nations demanded that the International Olympic Committee (IOC) exclude New Zealand from the Olympic Games. The IOC found no justification for banning New Zealand, they argued that its hands were tied because rugby was outside the Olympic movement. The All Black rugby tour im South Africa continued and New Zealand was not ejected.

This further infuriated the African Nations who felt that the IOC decision not to ban New Zealand would give comfort and respectability to the South African racist regime and encourage it to continue to defy world opinion.

Over Twenty African nations protested against the IOC’s defiance and, by extension, against the Apartheid in South Africa by boycotting the 1976 Summer Olympics in Montreal.

The boycott was led by Congolese official Jean-Claude Ganga, who helped the Higher Sports Council in Africa (CSSA) to organize the boycott. 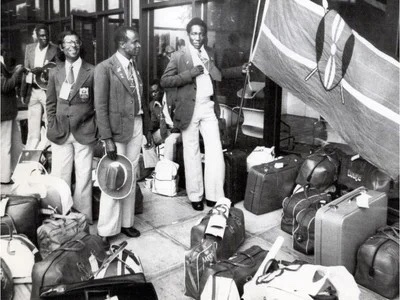 In all, more than 20 African nations stayed away, causing a massive reorganisation of scheduled events. Some athletes already taking part in friendly competitions had to pack up and leave Montreal. At two soccer stadiums, ticket-holders were given their money back because of the withdrawals of Nigeria and Zambia. Senegal and Ivory Coast were the only African countries that competed throughout the duration of the Games.

According to Mason, a Canada Research Chair at Thompson Rivers University in Kamloops, B.C. what was really important about the Montreal games boycott was that the word ‘apartheid’ appeared on the front page of every newspaper in the world, and people started talking about the issue and pressuring their own governments to take action.

Black Africans back then “didn’t have much of a voice in places like the United Nations and other global economic forums, but they had a lot of voice in international sports federations,” Mason said.

Apartheid finally came to an end in the early 1990s in a series of steps that led to the formation of a democratic government in 1994.

Previous article
The Traditional Creation Story of the Mandé Peoples of Western Africa
Next article
Kibera: Some Interesting Facts About Africa’s Largest Slum