Togo’s Akodessewa Fetish Market is recognized as the largest juju market in the world, it’s a place where Babalawos/Dibias aka Voodoo practitioners can find practically anything they need for their rituals.

Vodoo is a worldview encompassing philosophy, medicine, justice, and religion. Its fundamental principle is that everything is spirit.

The religion originated from West Africa and it is the main source of religions with similar names found among the African diaspora in the Americas, such as Haitian Vodou; Louisiana Voodoo; Cuban Vodú; Dominican Vudú, and Brazilian Vodum (Candomblé Jejé and Tambor de Mina).

The religion is very much alive today despite centuries of Christian and Islam influence in the Gulf of Guinea from Nigeria to Ghana. In fact there are many Christians and Muslims today who don’t identify as a voodoo worshipper who still combine the practice of their Abrahamic religion with the practice of Voodoo.

People (voodooists, Christians and Muslims alike) often seek the help of the voodoo priest when they need an urgent solution to a problem or a charm to help them achieve a particular goal and when they do, often times they are given a list of things to buy by the voodoo priest. In Togo, Akodessewa Voodoo Market is usually where they go to buy this things. 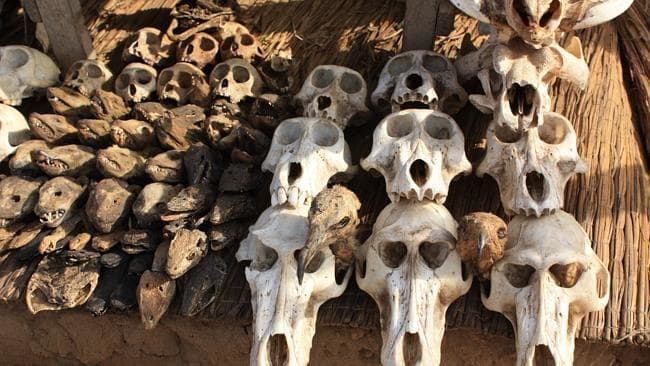 Akodessawa Fetish Market is like a one stop super market for charm ingredients and anything else one might need to prepare a potent charm or perform a ritual. The market is lined with lots of wooden tables, with piles of exotic animal heads, tails, eyes, skins, paws and limbs of various animals sampled on them.

Voodoo merchants plying their trade in the market have products gathered from countries all over West Africa and no matter what you are come looking for they’re bound to have something for you.

People from every part of the world regardless of race and tribe come to the market to buy body parts of dead animals as prescribed by their traditionalist or consult the in-house priest.

The market also houses voodoo priests who bless, create talismans and charms good for treating everything from infertility to removing generational or individual curses.

As the largest voodoo market in the world, and one of the very few exotic attractions in Togo, Akodessewa Fetish Market is a haven for voodoo practitioners and a hotspot for daring tourists.

Previous article
How to Say Thank You in 34 African Languages
Next article
Top 10 African Countries With the Lowest Life Expectancy, 2022