How to Say Thank You in 34 African Languages

The total number of languages natively spoken in Africa is said to be between 1,250 and 2,100, and by some counts at over 3,000. Below are how to say thank you in 34 African languages

How to Say Thank You in 34 African Languages 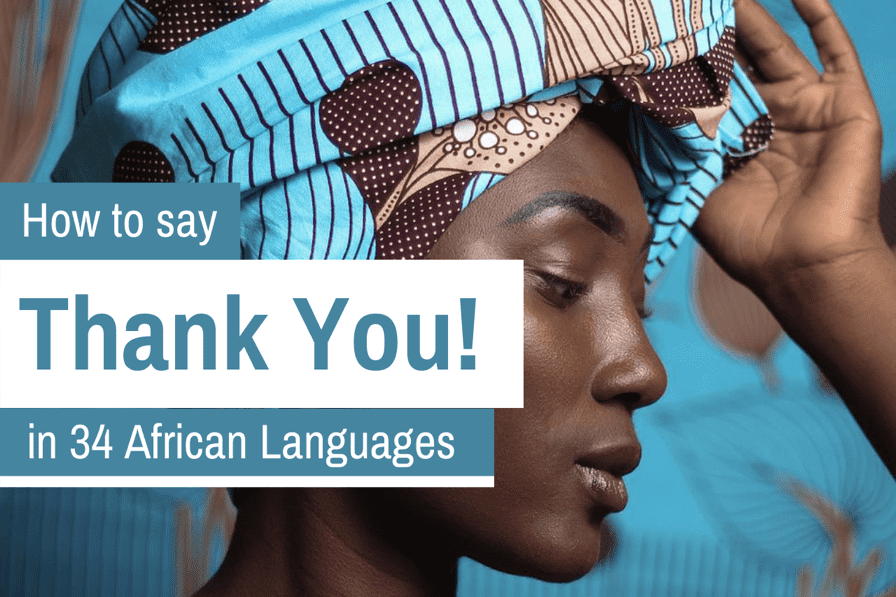 The Zarma people are an ethnic group predominantly found in westernmost Niger. They are also found in significant numbers in the adjacent areas of Nigeria and Benin, along with smaller numbers in Burkina Faso, Ivory Coast, Ghana, Togo, and Sudan.

Xhosa is one of the most popular language in Africa, it’s the official languages of South Africa and Zimbabwe. Xhosa is spoken as a first language by approximately 8.2 million people and by another 11 million as a second language in South Africa, mostly in Eastern Cape, Western Cape, Gauteng and Northern Cape.

The Krobo people are an ethnic group in Ghana. They are grouped as part of Ga-Adangbe ethnolinguistic group and they are also the largest group of the seven Dangme ethnic groups of Southeastern Ghana.

The Bassa are a Bantu ethnic group in Cameroon. They number approximately 800,000. The Bassa speak the Basaa language.

The Venda are a Southern African Bantu people living mostly near the South African-Zimbabwean border.

The San are the oldest inhabitants of Southern Africa, where they have lived for at least 20 000 years. The term San is commonly used to refer to a diverse group of hunter-gatherers living in Southern Africa who share historical and linguistic connections.

Maasai or Maa is an Eastern Nilotic language spoken in Southern Kenya and Northern Tanzania by the Maasai people, numbering about 800,000.

Swahili, also known by its native name Kiswahili, is a Bantu language and the native language of the Swahili people native primarily to Tanzania.

Chaga, also Kichaga or Kichagga, is a Bantu dialect continuum spoken by the Chaga people of northern Tanzania, south of Mount Kilimanjaro.

Yoruba is a language spoken in West Africa, primarily in Southwestern Nigeria. It is spoken by the ethnic Yoruba people. The number of Yoruba speakers is roughly 43 million, plus about 2 million second-language speakers.

The Akan are a meta-ethnicity living primarily in the countries of present-day Ghana and Ivory Coast in West Africa.

Ewe is a language spoken in Togo and southeastern Ghana by approximately 20 million people mainly in West Africa in the countries of Ghana, Togo, and Benin.

Luganda is a Bantu language of the Baganda people, widely used in Uganda.

Dagbani, also known as Dagbanli and Dagbanle, is a Gur language spoken in Ghana. It is a compulsory subject in primary and junior high school in the Dagbon Kingdom, which covers the eastern part of the region.

The Igbos are people who live chiefly in southeastern Nigeria.

The Bambara are a Mandé ethnic group native to much of West Africa, primarily southern Mali, Guinea, Burkina Faso and Senegal.

The class is being taught in Changana, a local language spoken in southern Mozambique and in the capital Maputo that is closely related to Tsonga.

Afrikaans is a creole language that evolved during the 19th century under colonialism in southern Africa. This simplified, creolised language had its roots mainly in Dutch, mixed with seafarer variants of Malay, Portuguese, Indonesian and the indigenous Khoekhoe and San languages.

The official language of Ethiopia, a Semitic language descended from Ge’ez and spoken by about 9 million people.

Hausa is a Nigerian language spoken by the Hausa people in Chad, and mainly within the northern half of Nigeria, Ghana, Cameroon

Shona is a Bantu language of the Shona people of Zimbabwe.

Somali is an official language of Somalia, Somaliland and Ethiopia, and a national language in Djibouti as well as in northeastern Kenya.

Tarok is a regionally important Plateau language in the Langtang area of southeast Plateau State, Nigeria, where it serves as a local lingua franca. 

A Bantu language used by over 8 million people as a lingua franca in northern parts of Congo and the Democratic Republic of Congo (Zaire).

The Bantu language of the Tswana people, related to the Sotho languages and spoken by over 4 million people in southern Africa. It is one of the official languages of South Africa.

Nyanja is an official language and common lingua franca in Malawi and Zambia, and is spoken by some in Mozambique, Zimbabwe and South Africa as well.

The Sotho people, also known as the Basuto or Basotho, are a Bantu nation native to southern Africa.

Zulu is a Southern Bantu language of the Nguni branch spoken in Southern Africa. It is the language of the Zulu people, with about 12 million native speakers, who primarily inhabit the province of KwaZulu-Natal of South Africa.

 Idoma is the second official language spoken in Benue State in southeast-central Nigeria.

Sisaala is a Gur language cluster spoken in northern Ghana near the town of Tumu and in the neighbouring republic of Burkina Faso.

 Wolof is a national language of Senegal, where it is spoken by approximately 4.6 million people as a first language (mother tongue). An additional 7.8 million people use Wolof as a lingua franca.