Albinos In Tanzania Are Being Hunted For Their Limbs

Families are said to be trading in their own loved ones in a bid for money and influence from some of the country’s most powerful people. 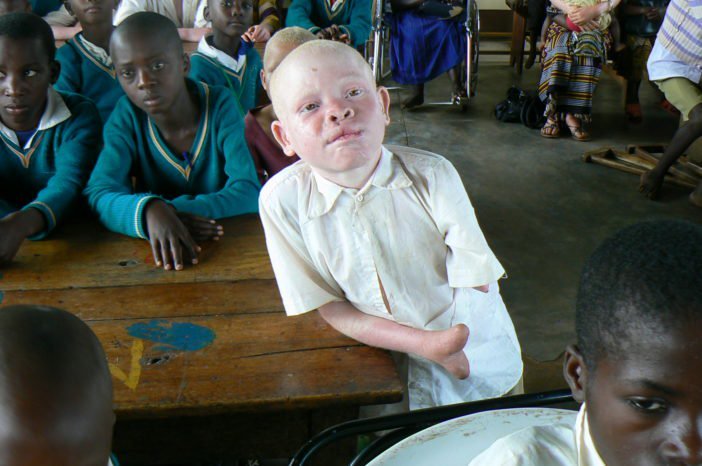 It is believed in the African country that albino body parts will bring a person wealth or luck, with people willing to pay as much as $3,000 to $4,000 for a limb, or as much as $75,000 for the whole body, the MailOnline reports.

As a result, people with albinism are often attacked by people who wish to chop off their limbs, leaving them mutilated, or in many cases, dead.

Albinism affects one in 1,400 people in Tanzania, which experts put down to incest in rural communities in the country.

It is a hereditary condition which causes the complete absence of pigmentation in the skin, hair and eyes.

Since records began, there have been 74 murders, with 59 people with albinism surviving attacks, while 16 graves have been robbed for body parts, however there are believed to be many more unrecorded.

The most recent case recorded was four-year-old Pendo Emmanuelle Nundi, who was abducted from her home in December. Her father and uncle were both arrested in connection with her disappearance, however even with a reward of £1,130 offered up by police, she still hasn’t been found. 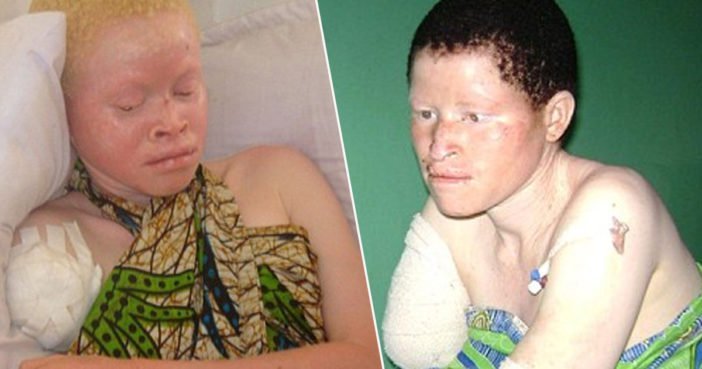 Mwigulu Matonange was only 10 when he was attacked by two men on his way home from school. The men chopped off his left arm, before disappearing into the jungle.

After the brutal attack, which took place in February 2014, he told IPP Media: ‘I was held down like a goat about to be slaughtered.’

In this case, the men were complete strangers to Mwiglulu, however there’s suspicion surrounding Pendo’s father after he took half-an-hour to report her abduction, despite there being neighbours around who could’ve helped as soon as she was taken.

According to a UN report, a 38-year-old woman was attacked by her husband and four other men while she was sleeping in February 2013 while their eight-year-old daughter looked on.

As reported by the MailOnline, Josephat Torner, who campaigns for albino rights, asked:

Now we can see the parents who are involved in planning the attacks. What kind of war are we fighting if parents and family do this? Who can we trust?

You do not know who is your enemy.

People with the albinism are being hunted and killed for our body parts. It is because people want to become rich.

We are still living in danger. It is because people, they have different ideas. Some people, they are thinking they should get our body parts and sell to different places.

The question is, why? Why now? And who is behind the killings?

1. In Tanzania it is believed that potions made from albino body parts by a witchdoctor can heal the sick, bring good luck and even wealth.

2. As a result of the belief that certain body parts of albinistic people can transmit magical powers, people with albinism have been persecuted, killed and dismembered, and graves of albinos dug up and desecrated.
3. According to Red Cross, a complete set of albino body parts can go for as much as $75,000 (£50,000) in Tanzania, and are usually bought by witchdoctors.

4. At least 75 people living with albinism in Tanzania have been killed in targeted attacks since 2000, and more than 100 people have been attacked and mutilated.

5. A United Nations report on albino persecution published in 2013, placed Tanzania at the top of a list of African nations where albinos are targeted for murder. “In most of the cases documented, the attacks involved dismembering the victim’s limbs and resulted in death,” the report said. “In a few other cases, the victims were beheaded; genitals, ears, and bits of skin were removed; tongues were cut out and the eyes and the heart gouged out.”

6. Roughly 7000 children with albinism are protected by the Tanzanian government from human predators.

7. The first ever conviction for the killing of an albino in Tanzania occurred on 23 September 2009. The conviction came about following the murder and mutilation of a 14-year-old albino boy, who was attacked by three men and chopped into pieces.

8. In most rural Tanzania, treatments made from albino body parts are believed to be particularly powerful. Because of this, their remains are used in preparing human potions used by traditional healers to treat the sick.

9. Believing it will bring them good luck and big catches, some fishermen on the shores of Lake Victoria weave albino hair into nets before casting it into the lake.

10. In Tanzania, albino bones are ground down and buried in the earth by fetish miners, who believe they will be transformed into diamonds.

11. In 2010, A 50 year old man was sentenced to die by hanging for killing a five-year-old albino girl in Tanzania by hacking off her legs with a machete and then drinking her blood.

12. As a result of the belief that a witchcraft ritual would be more powerful if the victim screams during the amputation, body parts are often cut from live victims.

13. Albino children are the ones usually targeted for these rituals, not because of the obvious fact that they are helpless, but because it is believed that their innocence will enhance the potency of the witchcraft ritual.

14. Even though neccesary steps has been taken by the federal government to curb the ritualistic mutilation and killings of albinos, it would take the grace of a supreme being to end the killings.