In what has been described as a “silent extinction”, giraffe numbers have fallen by up to 40 per cent over the last 30 years due to threats including trade in their parts, as well as habitat loss, illegal hunting and civil war, conservationists said. 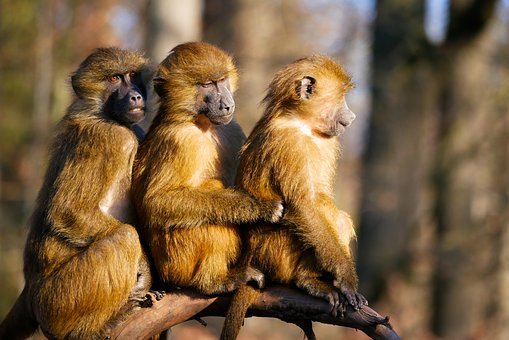 British trophy-hunters legally killed and brought home the bodies of about 500 baboons and monkeys over a 30-year period which only ended two years ago, according to a new report.

Nearly 100 dead primates were imported into the UK from Africa in the nine years leading up to 2017, the Campaign to Ban Trophy Hunting (CBTH) concluded.

Some safari hunt firms even encourage customers to target monkeys and baboons with bows and arrows, increasing the chances of inflicting agonising injuries, the group found.

The organisation’s report was based on statistics from the Convention on International Trade in Endangered Species (Cites), which both exempts trophy-hunting from a ban on commercial hunting, and issues permits for it.

It exposed the death toll racked up by British hunters, revealing that 494 primates – 383 baboons and 111 monkeys – were imported into the UK from the 1980s until 2017, the last year for which figures are available.

Hunters even targeted the scimitar-horned oryx, which is listed as extinct in the wild by the IUCN, but is bred for sport on private hunting ranches.

As a result, wildlife lovers are lobbying a meeting this week of Cites, asking it to stop issuing permits so that trophy-hunting would be outlawed globally.

Eduardo Goncalves, of the CBTH, told The Independent : “People will be bewildered to learn that trophy hunters shoot monkeys as well as better-known ‘trophy animals’ such as lions and elephants. They often live in close proximity to human habitations, so it is ludicrous to portray this as ‘sport’ hunting.

“These are primates with whom we share over 90 per cent of our DNA. This is as close to murder as you can get. We literally shoot ourselves in the foot when it comes to trophy hunting, as all species have an important role in the ecosystem.”

There are currently no international trade rules that protect giraffes, meaning that trophies and body parts can be exported and imported without any checks or records.

But if a proposal from six African countries is approved, countries that export body parts from giraffes would have to keep records of the exports and trophy hunting would be regulated.

Hunters spend tens of thousands of pounds on a luxury safari hunting holiday but the fee for shooting a monkey or baboon can be just a few pounds, he said.

“Some safari hunting firms even encourage trophy hunters to bowhunt monkeys and baboons. This increases the likelihood of painful, life-altering injuries,” he added.

The countries that are signed up to the Cites agreement are facing pressure as they meet in Geneva this week and next over trophy-hunting and a range of other wildlife issues.

Previous articleForbes: These are the Highest-earning Black Stand-up Comedians of 2019
Next articleUganda Abolishes Mandatory Death Penalty