At 23, Emma Theofilus is Namibia’s youngest sitting deputy minister after being selected by President Hage Geingob’s as one of the eight presidential nominees for the country’s national assembly. 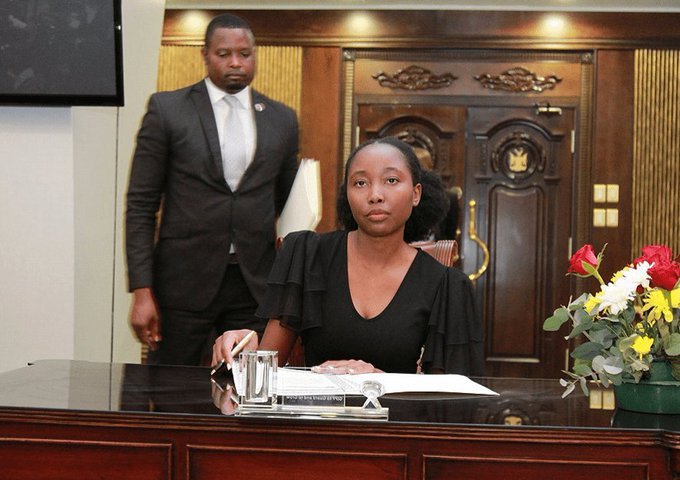 The appointment of Theofilus by President Hage Geingob as deputy information and technology minister also made her Africa’s youngest member of parliament.

The 23-year-old law graduate was part of president Hage Geingob’s list of eight non-voting members announced on Sunday and sworn in on Monday.

Her ascendancy to the deputy ministerial position has had many people questioning her experience and suitability for the post, but Theofilus confidently shot down such assertions, noting that anyone is able to learn, understand and acquaint themselves with the task at hand to be able to do a job.

She said she will not go into the ministry thinking “I know it all”, but would acquaint herself with the work already done. Theofilus noted that there is more than meets the eye in terms of a deputy ministerial post, and that the portfolio requires a lot of coordination.

The incoming deputy minister said she will push for the finalisation of certain critical bills her ministry is busy with. She said some of the bills to be tabled include access to information and the cyber bill, which are pertinent.

She stressed that as a nation, access to information is important, in terms of human rights and thus it would be a task she would take on in her position.

The deputy minister added that she would accept the position as a new challenge, and she has had a fair share of challenges such as serving in various positions at Nanso, high school, deputy mayor and deputy speaker of the children’s parliament of Namibia. She has also worked with various youth groups, such as Global Shapers Windhoek.