Ethiopia: Faces Of The Karo People

The Karo tribe living along the borders of the Lower Omo River incorporate rich, cultural symbolism into their rituals by using ornate body art, intricate headdresses, and body scarification to express beauty and significance within their community. This lively tribe of around 2000 people is the main sedentary agriculturalist group in the Lower Omo Valley area of southern Ethiopia. 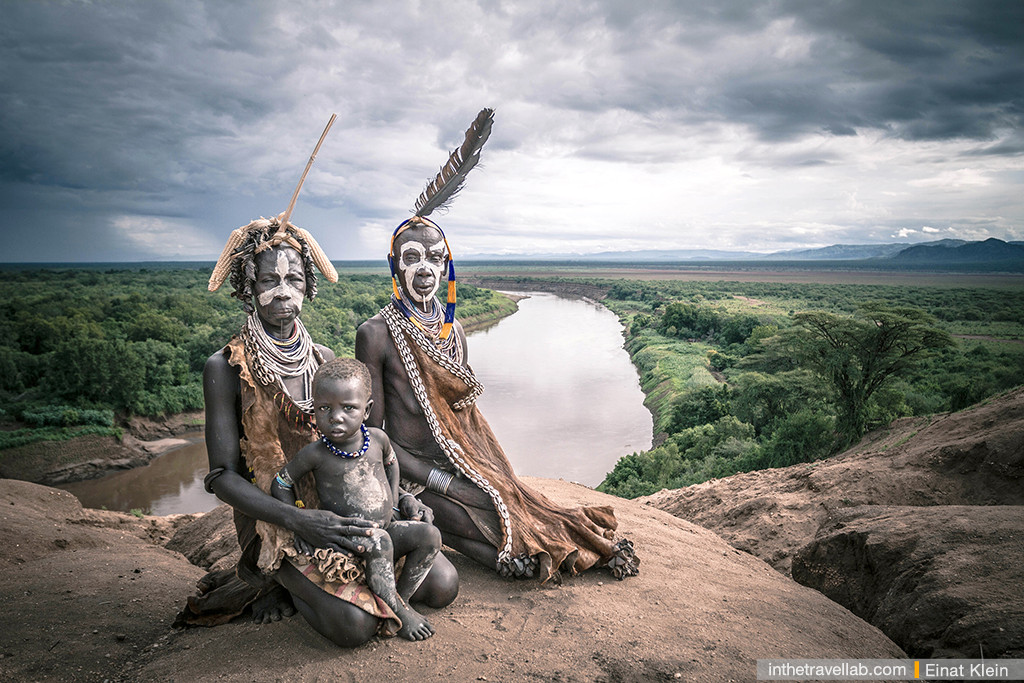 Many of their traditional rituals might have originated with another much larger tribe: the Hamar, which is of the same lineage but numbers approximately 30,000. These two groups speak nearly identical, Omotic languages and much of the symbolism found in both groups’ ceremonies suggest a rich, cultural history together.

The Karo people differentiate themselves from many of the neighbouring tribes by excelling specifically in body and face painting. They paint themselves daily with coloured ochre, white chalk, yellow mineral rock, charcoal, and pulverized iron ore, all natural resources local to the area.

The specific designs drawn on their bodies can change daily and vary in content, ranging from simple stars or lines to animal motifs, such as guinea fowl plumage, or to the most popular – a myriad of handprints covering the torso and legs. Both the Karo and the Hamar men use clay to construct elaborate hairstyles and headdresses for themselves, signifying status, beauty, and bravery. 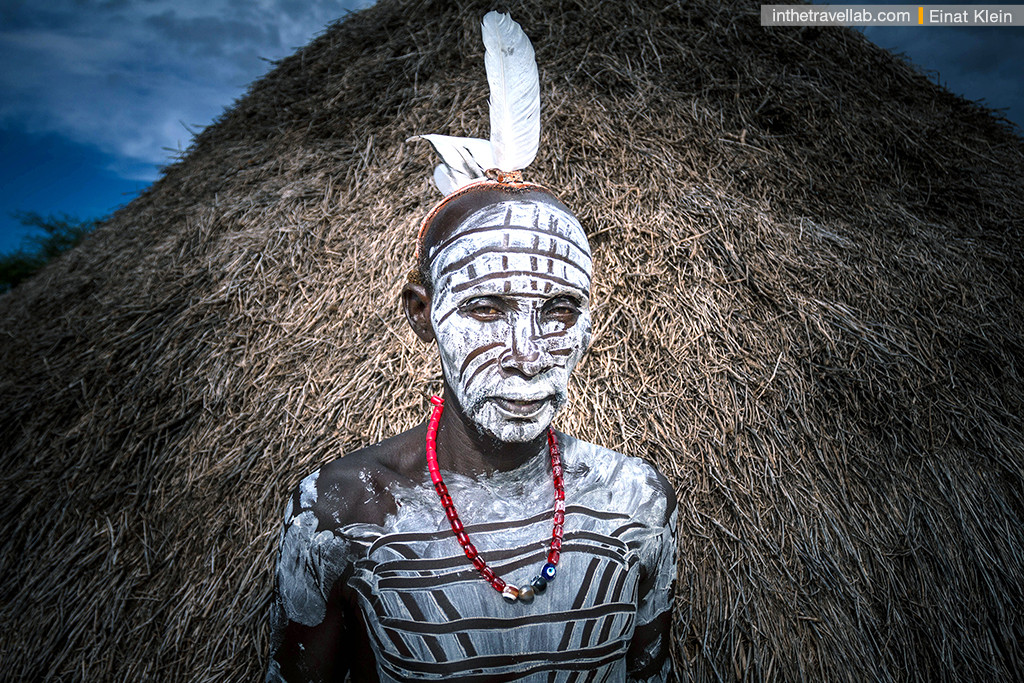 The Karo male hairstyle is very elaborate. A part is made from one ear to the other. The front portion is made into braids, which frame the forehead. The rest of the hair is drawn back into a thick chignon and held firmly by a colorful cap of glazed earth. Sometimes pieces of bark are glued onto the cap and holes are made in the bark to attach ostrich feathers. Or, it is painted in red, white and black – three colors of mystical and legendary significance.

A man wearing a grey and red-ochre clay hair bun with an Ostrich feather indicates that he has bravely killed an enemy from another tribe or a dangerous animal, such as a lion or a leopard. This clay hair bun often takes up to three days to construct. It is usually remade every three to six months, and can be worn for a period of up to one year after the kill. 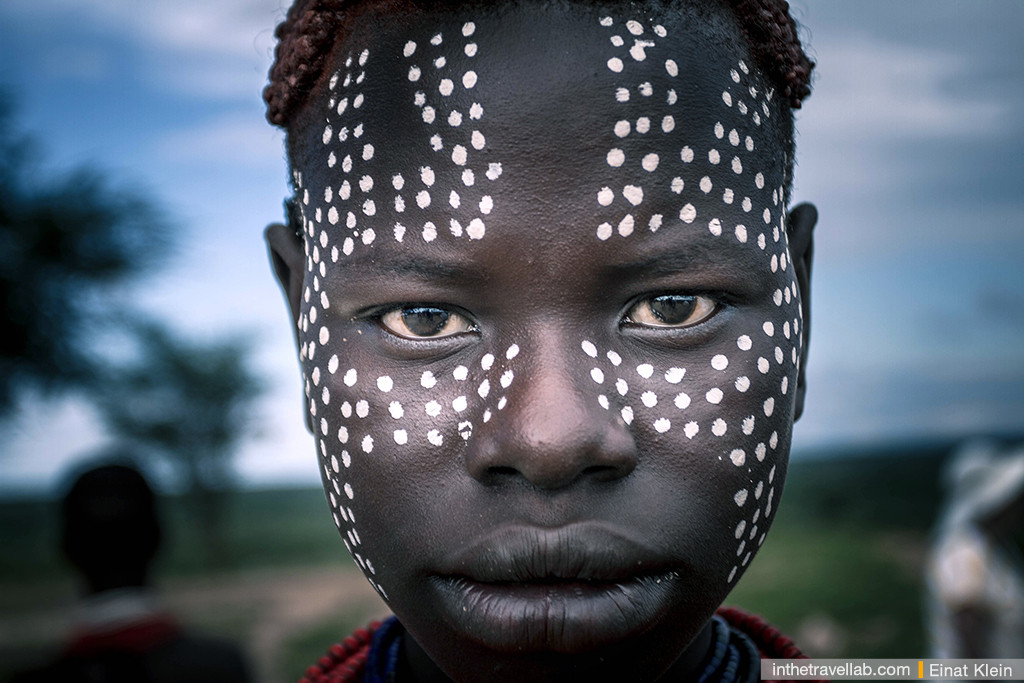 Large beads worn around the neck of a man also signify a big game kill. The Karo men cover their body and face with ashes mixed with fat, a symbol of virility for important festivities and the ritual combats between the clans, which take place after the harvest. (Cinders also protect them from mosquitoes and tsetse fly). These ceremonial combats are of great importance because they enable the men to exhibit their beauty and courage and thus, perhaps to attract a woman. The scars and lacerations, particularly those on the chest, are highly esteemed marks of valor.

Karo women usually wear only a skin loincloth, decorated with beads and cowries. Their hair is greased with red clay and cut into a short skullcap.The Karo’s artistic practices in their daily lives are for self-pleasure and pride, respect and symbolic recognition within their society, and as a means of attracting the opposite sex during rituals. Courtship dances are frequently held and oftentimes the outcome of these frenzied, impassioned dances result in future marriages. 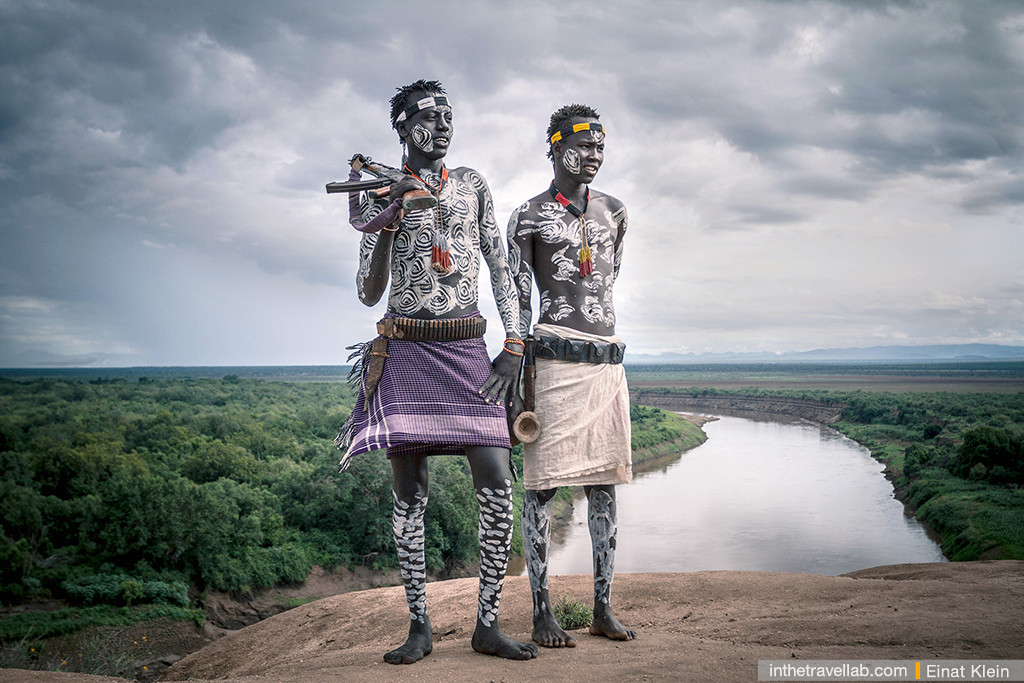 Specific rituals occur regularly within the tribal communities, and sometimes neighbouring villagers will travel all night to witness these rites of passages and participate in the celebrations. Body scarification conveys either significant symbolism or aesthetic beauty, depending upon the sex of the individual.

The scarification of the man’s chest indicates that he has killed enemies from other tribes, and he is highly respected within his community. Each line on his chest represents one killing, and complete chest scarification is not rare. The Karo women are considered particularly sensual and attractive if cuts are made deep into their chests and torsos and ash is rubbed in, creating a raised effect over time and thereby enhancing sexual beauty.

The Karo, like the Hamar, perform the Bula or Pilla initiation rite, which signifies the coming of age for young men. The initiate must demonstrate that he is ready to “become a man” by leaping over rows of cattle six times consecutively without falling. If successful, the boy will become eligible for marriage (as long as his older brothers are already married) and he will be allowed to appear publicly with the elders in sacred areas.

In recent times however the modern world has begun to creep into their existence. Plastic water containers, odd T-shirr and the automatic weapon. The end of the Mengistu reign in the 1990s and ongoing conflict in Sudan and Somalia have ensured a flood of AK-47′s, Kalashnikovs and G-3 rifles into the region. Guns are used to protect cattle, to hunt and to settle disputes.

All photographs by Einat Klein: einatklein.com