Hamar: The Community in Ethiopia Where Women Entice Men To Flog Them

The Hamar people of the Omo Valley In Ethiopia consist of over 46,532 people. These pastoral and polygamous people are popular for their traditional ‘ jumping of bulls’. This ceremony often attracts neighbours and people foreign to their culture to witness it.

Hamar Bull Jumping Ceremony: Hamar men are made to jump over 15 to 30 bulls naked as a rite into becoming a Maza. Mazas are men who have successfully passed through this rite and allowed to marry.

Failure to succeed means he will receive whips from the women and be unable to marry.

After the ceremony, Harmar women entice the Maza’s to use whips and canes on their backs by forcing them to beat them sometimes against their wish. With blood seeping out from their backs. they tell the men to continue whipping them.

It is the tradition that the female (those ripe enough to marry) gets whipped by the Maza’s (men who all recently jumped the cattle) to prove not only their strength but also to prove their love and loyalty towards their male relative and family. Also, a woman without scars will most likely not be able to marry. 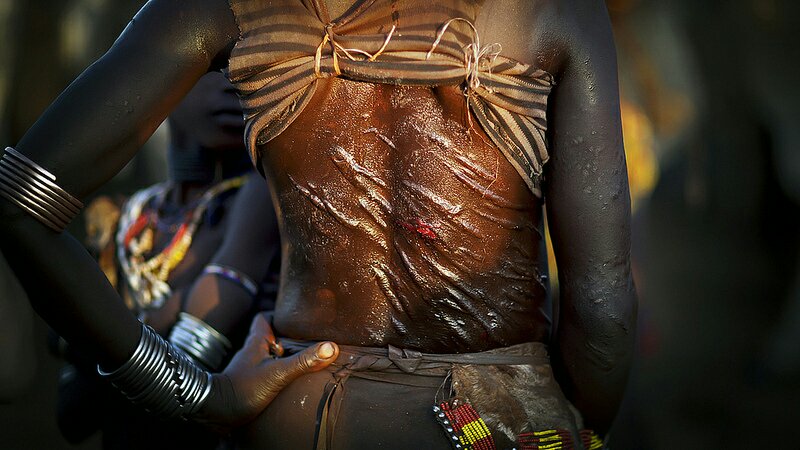 These whips, though painful, show that the women are dedicated to the men.

The number of scars on the back of the women (those inflicted by him) also shows the new Maza who loves him best.

When this is complete, they go into the Evangadi (night dancing) before the families of the new Maza announce his first wife..