Meet Adetunwase, the Only Nigerian With 4 Guinness World Records

Adetunwase Adenle is a Nigerian Teacher, Artist, Marketing Consultant and the only Nigerian citizen who has four Guinness World Records to his name. 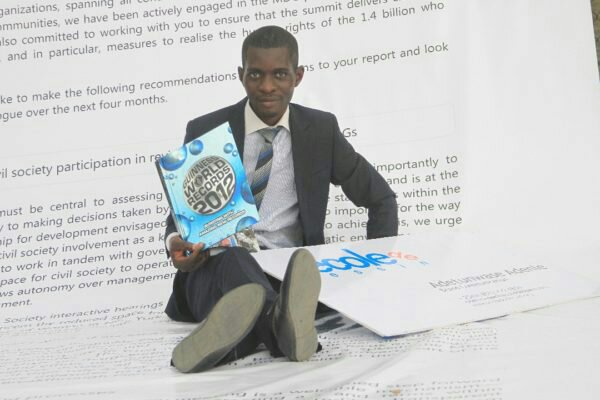 According to the BBC pidgin, Adetunwase Adenle holds the record for the biggest painting that has been painted by the largest number of people. This record was made with the aim of teaching less privileged kids how to paint, draw and celebrate Nigeria at 50.

He is the co-founder and CEO of Ecole De Dessin School of Art. He attended Federal College of Education (Technical) Akoka where he studied Fine and Applied Art.

Adenle’s first Guinness World Record is said to be as big as a football field. It is a painting that has the highest number of recreations in the world.

His second Guinness World Record is for the highest number of children who read together at the same time to encourage other children to read books.

Adenle’s third Guinness World Record is for the highest number of children to wash their hands together at the same time to promote personal hygiene.

Finally, his fourth Guiness World Record was for creating the biggest post office stamp which was used to celebrate Lagos State at 50.