Meet Saint Bakhita, The Sudanese Slave Who was made a Catholic Saint in 1992

Meet Saint Bakhita, The Sudanese Slave Who was made a Catholic Saint in 1992

Saint Josephine Bakhita was born around 1869 in Darfur, Sudan. She was captured by slave-traders at the age of nine, forcibly converted to Islam and sold many times in the slave markets of Sudan. She was enslaved to a brutal family who would beat her every day until she bled and bore the scars for the rest of her life. 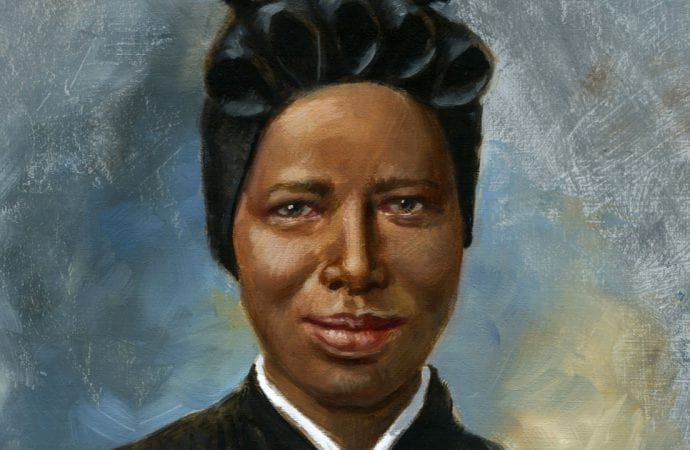 Born in Olgossa in the Darfur region of southern Sudan, Josephine was kidnapped at the age of 7, forcibly converted to Islam, sold into slavery and given the name Bakhita, which means fortunate. She was resold several times, finally in 1883 to Callisto Legnani, Italian consul in Khartoum, Sudan.

“During all the years I stayed in that house, I do not recall a day that passed without some wound or other. When a wound from the whip began to heal, other blows would pour down on me.”

Two years later, Unrest in Sudan forced Legnani to escape back to Italy and Josephine went with him. When they arrived in Italy, she was then “sold” to a family friend, Turina Michieli from Venice. There in Venice, she stayed with the Cannossian Sisters for a few months while her “mistress” travelled.

When the Michielis returned from Africa and wanted to take Josephine back with them, the future saint refused to go. She described discovering the love of God amongst the sisters. For three days Mrs. Michieli tried to force the issue. During the ensuing court case, the Canossian Sisters and the patriarch of Venice intervened on Josephine’s behalf. The court ruled that because the British had induced Sudan to outlaw slavery before Bakhita’s birth and because Italian law did not recognize slavery, Bakhita had never legally been a slave.

For the first time in her life, Bakhita found herself in control of her own destiny. She chose to remain with the Canossians. On 9 January 1890 Bakhita was baptized with the names of Josephine Margaret and Fortunata. On the same day she was also confirmed and received Holy Communion from Archbishop Giuseppe Sarto, the Cardinal Patriarch of Venice, the future Pope Pius X. 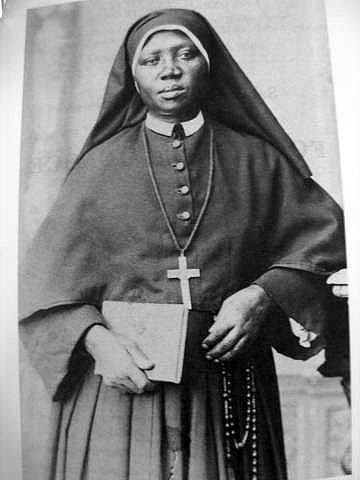 During her 42 years in Schio, Bakhita was employed as the cook, sacristan and door keeper and was in frequent contact with the local community. Her gentleness, calming voice, and ever-present smile became well known and Vicenzans still refer to her as Sor Moretta (“little brown sister”) or Madre Moretta (“black mother”).

Her special charisma and reputation for sanctity was also noticed by her order; the first publication of her story by Ida Zanolini in 1931, made her famous throughout Italy. During the Second World War (1939–1945) she shared the fears and hopes of the town people, who considered her a saint and felt protected by her mere presence. Bombs did not spare Schio, but the war passed without a single casualty.

Her last years were marked by pain and sickness. She used a wheelchair but she retained her cheerfulness, and if asked how she was, she would always smile and answer: “As the Master desires.” In the extremity of her last hours her mind was driven back to the years of her slavery and she cried out: “The chains are too tight, loosen them a little, please!” After a while she came round again. Someone asked her, “How are you? Today is Saturday,” probably hoping that this would cheer her because Saturday is the day of the week dedicated to Mary, mother of Jesus . Bakhita replied, “Yes, I am so happy: Our Lady … Our Lady!” These were her last audible words.

She died in 1947 and For three days her body lay on display while thousands of people arrived to pay their respects.

The petitions for her canonisation began immediately, and the process was officially commenced by Pope John XXIII in 1959, only twelve years after her death. On 1 December 1978, Pope John Paul II declared Josephine Venerable, the first step towards canonisation. On 17 May 1992, she was declared Blessed and given February 8 as her feast day. On 1 October 2000, she was canonised as Saint Josephine Bakhita.

She is venerated as a modern African saint, and as a statement against the brutal history of slavery. She has been adopted as the patron saint of Sudan and human trafficking survivors.