On Wednesday the 23rd of may 2018, Chimamanda Ngozi Adichie became the first African ever to deliver the Harvard College Class Day Speech, which is a major feature of the university’s annual graduation events. Class Day speakers are selected by the graduating students themselves. 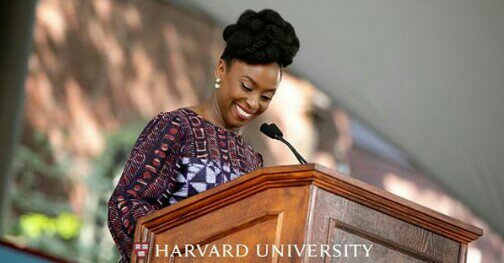 Chimamanda’s speech at Harvard on Wednesday conveyed the importance of seeking to tell the truth in today’s world. She also stated that while it is very important for people to be outraged when appropriate, it is crucial for one to understand the context in which an event took place or a statement was made—as well as the intent of the protagonist or speaker—before becoming offended or outraged. She exhorted the graduating students to be courageous in speaking the truth, even at the risk of being criticized for doing so, noting that true satisfaction comes from maintaining one’s integrity.

“Ignorance acknowledged is an opportunity; ignorance denied is a closed door. And it takes courage to admit to the truth of what you do not know,” Chimamanda Ngozi Adichie said in her #Harvard18 Class Day speech https://t.co/oQOLAaaKDB

“There is nothing more beautiful than to wake up every day holding in your hand the full measure of your integrity,” she said. She received a standing ovation from the audience of approximately eight thousand people.