Slavery Abolition Act 1833: Slavery Was Abolished Throughout The British Empire On This Day

The Slavery Abolition Act of 1833 that abolished slavery in most British colonies, freeing more than 800,000 enslaved Africans in the Caribbean and South Africa and making the purchase or ownership of slaves illegal within the British Empire, (with the exception of “the Territories in the Possession of the East India Company”) took effect on this day in 1834.

The Act abolished slavery in most British colonies, freeing more than 800,000 enslaved Africans in the Caribbean and South Africa and making the purchase or ownership of slaves illegal within the British Empire, with the exception of “the Territories in the Possession of the East India Company”.

The Act also made Canada a free territory for enslaved American blacks. Thousands of fugitive slaves and free blacks subsequently arrived on Canadian soil between 1834 and the early 1860s.

There were lots of different factors that led to the 1833 Abolition Act. Slave revolts, home grown abolition movements, religious arguments, government policies and the economy. By the time of the act coming into force in 1833/1834 the economy wasn’t as reliant on the slave trade as it had been in the early 1700’s.

The trade in slaves was also becoming less cost effective. The trade usually involved two trips for each enterprise – one slave ship and one cargo ship.

The slave ship would be sent from Britain to the markets on the African coast, and be docked there for some time whilst the crew waited for enough slaves to be brought to the market for purchase before eventually setting sail to the Caribbean. Secondary ships would then have to be sent directly from Britain to the Caribbean to pick up the produce. This process could sometimes take up to 2 years. 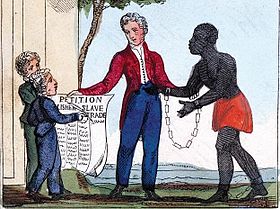 Slave ships and cargo ships also had to be equipped differently for their load. A slave ship would be infused with weeks and months of human excrement, vomit, blood as well as food waste. No trader would then load perishable and valuable goods onto the same vessels. In addition, plantation owners encouraged ‘breeding programs’ so slaves would reproduce, effectively gaining more slaves at no extra cost rather than purchase at market.

The later Anti-Slavery Society was founded in 1823. Its goal was not only the continued suppression of the trade but the end to slavery itself – but gradually and not immediately.

In 1831 there was a large-scale slave revolt in Jamaica, also known as ‘The Baptists War’. It was organised originally as a peaceful strike by Baptist minister Samuel Sharpe. The rebellion was squashed with force ten days later in early 1832. The damage to the islands economy and the plantations finances, plus two inquiries into the revolt by the British parliament added to the case for emancipation at home and abroad.

By July 1833, the act was read for the third time in parliament and a few days before the death of Wilberforce. The same year, parliament received several more petitions calling for the end of slavery. Finally, the act was passed and received Royal assent on 1 August.

The act had two major parts to it – the emancipation of all slaves throughout the British colonial empire with the exception of those held by the East India Company, (The exception was eliminated in 1843) and compensating slave owners for the loss of the slaves.

The Act provided for payments to slave-owners. Under the terms of the Act, the British government raised £20 million to pay out for the loss of the slaves as business assets to the registered owners of the freed slaves. Those who had been enslaved did not receive any compensation.

Half of the money went to slave-owning families in the Caribbean and Africa, while the other half went to absentee owners living in Britain.

The Slavery Abolition Act of 1833 was repealed in its entirety by the Statute Law Act of 1998. In its place the Human Rights Act of 1998 incorporates into British Law Article 4 of the European Convention on Human Rights which prohibits the holding of persons as slaves.

Previous article
According To Reputation Poll International (PI), These Are The 100 Most Reputable Africans In 2020
Next article
The Mbuti People Of Congo And Their Sister Exchange Form Of Marriage