Africa is the second largest continent on earth and has immense resources, and yet we are nowhere, our people are poor, our children are suffering and despite all the resources -both human and natural – present, things aren’t going as it should. What is wrong with the continent, why aren’t we moving forward…? Well thats a question for another day… Here are Top 10 Terrible Issues Facing Children In Africa. 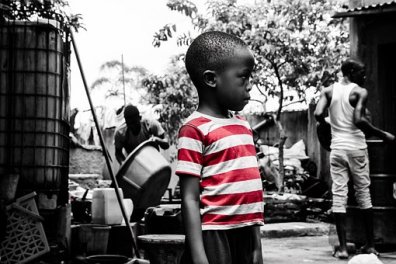 According to UNICEF, 25,000 children die each day in Africa due to poverty. And arounf sub saharan africa, round 27-28 percent of all children in are estimated to be underweight or stunted.

So many kids die each day due to lack basic sanitation, safe water, adequate shelter, and generally poor living conditions due to poverty.

Millions of parents in Africa must cope daily with the fact that their offspring may not survive the first critical years of life; in many cases, the diseases that threaten their children’s lives are preventable.

Of the 50 million refugees and displaced people in the world, approximately half are children. War is the primary factor in the creation of child refugees. It is also a principle cause of child death, injury, and loss of parents.

In the last decade, war has killed more than 2 million children, wounded another 6 million, and orphaned about 1 million. Children also flee their homes because they fear various forms of abuse such as rape, sexual slavery, and child labor. Circumstances of birth also play a role in depriving children of a legal home.

The toll of Rwanda’s civil war, for example, left orphan children to head some 45,000 Rwandan households, with 90 percent of these headed by girls.

A good education is important to improve the lives of African children. But due to lack of financial resources many children in Africa cannot afford to go to school.

It is said that More than 100 million children do not have access to school and Of the children who enroll in primary school, over 100 million drop out because of their parents inability to pay the school levies. Which isnt all that surprising considering the fact that a large portion of the African population has people who live below the poverty line. For example more than 50% of the people living in countries such as Swaziland, Burundi, Central African Republic etc live with just about $3 per month.

The prevalence of child abuse/neglect in Africa is widespread.

While Child abuse entails the Physical, sexual or emotional mistreatment of a child that causes long-term or permanent damage. Neglect is an act of omission, or the absence of action, the consequences of which can can be devastating to a child, as it leaves no visible marks and yet happens to be the most dangerous. Moreover, both usually involves infants and very young children who cannot speak for themselves.

Health outcomes are worse in Africa than anywhere else in the world, our leaders and the elites know this so they usually seek medical treatment abroad.,

This lack of health care facilities has increased the number of deaths of children. Children suffer from water-borne infection from the lack of clean drinking water. Children also get health problem through mother to infant, where mothers abuse alcohol and drugs creating abnormalities and growth disorder to infants.

Trafficking is the fastest growing means by which people are forced into slavery amd also a very booming imdustry.. It affects every continent and most countries.

According to UNICEF, over 200,000 children work as slaves in West and Central Africa. Boys are usually sold to work on cotton and cocoa plantations while girls are used as domestic servants and prostitutes. In some cases, children are kidnapped outright and sold into slavery while in others, families sell their children, mostly girls, for as little as $14.

An estimated 211 million children between the ages of 5 and 14 are working around the world, and a huge chunk of them are in Africa., according to the International Labor Organization some of this children work full time to help support their impoverished families.

There children whose labor can be considered forced, not only because they are too young to choose to work, but also because they are, in fact, actively coerced into working.

This include but not limited to children whose labor is pledged by parents as payment or collateral on a debt as well as children who are kidnapped or otherwise lured away from their families, those who were given or sold at a very early age to another family etc.

In Africa during times of war, children are most times singled out for recruitment by both armed forces and armed opposition groups, and exploited as combatants. It happened in the liberian cuvil war, biafran war.. and virtually all wars that have been fought on the African soil.

Easily manipulated, these children are sometimes coerced to commit grave atrocities, including rape and murder of civilians.

In Africa, the practice of child marriage although grotesque, is still widely practiced within certain ethnic groups. According to statistics, More than 25% of Kenyan girls are married before the age of 18 same in Nigeria. These young girls are in no position to understand what marriage entails, and invariably face a future of unrelenting hardship and incessant toil.

In Africa, violence against children takes a variety of forms: physical – flogging etc -, mental (insults) and sexual.. It occurs in both the home and at school. In the latter, cases where children have been assaulted and even raped by their teachers are not uncommon; with underaged girls who have been victims of rape often becoming pregnant and being forced to drop out.