With 2019 drawing to a close, this year’s Egyptology harvest proved excellent once again. Sometimes, the finds were new. At other times, fresh facts gave more meaning to old finds and knotted mysteries a little tighter. Other artifacts had not been seen in decades. Whichever way they present themselves, the haul makes for a fascinating read. From bizarre hieroglyphics, the real taste of Egyptian bread to temples underwater, you can now enjoy the best of Egyptology’s latest season.

1. The Mystery of The Bird Mummies 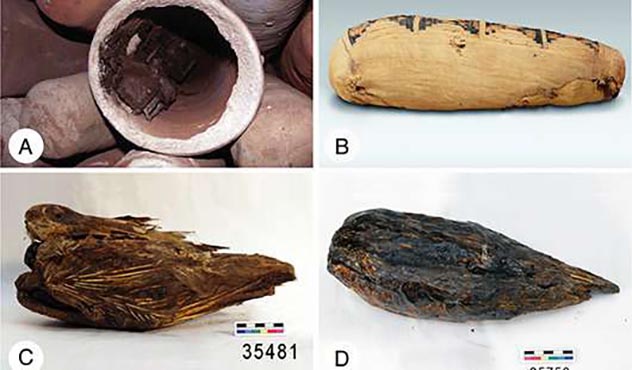 Egyptians loved to give mummies as offerings. Everyday citizens went to their local dealer, usually a priest of some sort, and bought a small animal or bird. Indeed, birds were so popular that Egyptologists have gathered millions of preserved avians. Some even had their own tiny coffins.

However, the sheer number of bandaged birds prompted the question of supply. The most commonly used species was the African sacred ibis but where did the Egyptians get them all? Conventional thought supported the idea that Egypt had ibis farms in the way that we have chicken farms. In 2019, geneticists drew samples from 40 ibis mummies and came to a very different conclusion.

Domesticated birds of the same species show similar DNA. The petrified ibises, however, showed enough variation to suggest that they were born wild. In other words, the Egyptians seemingly corralled wild birds to wrap them up as offerings. There is a problem with this, as critics quickly pointed out. Catching millions of ibises alone would have been close to impossible and also unsustainable. The Egyptians had a steady supply but seemingly not farmed. The feathery mystery continues. 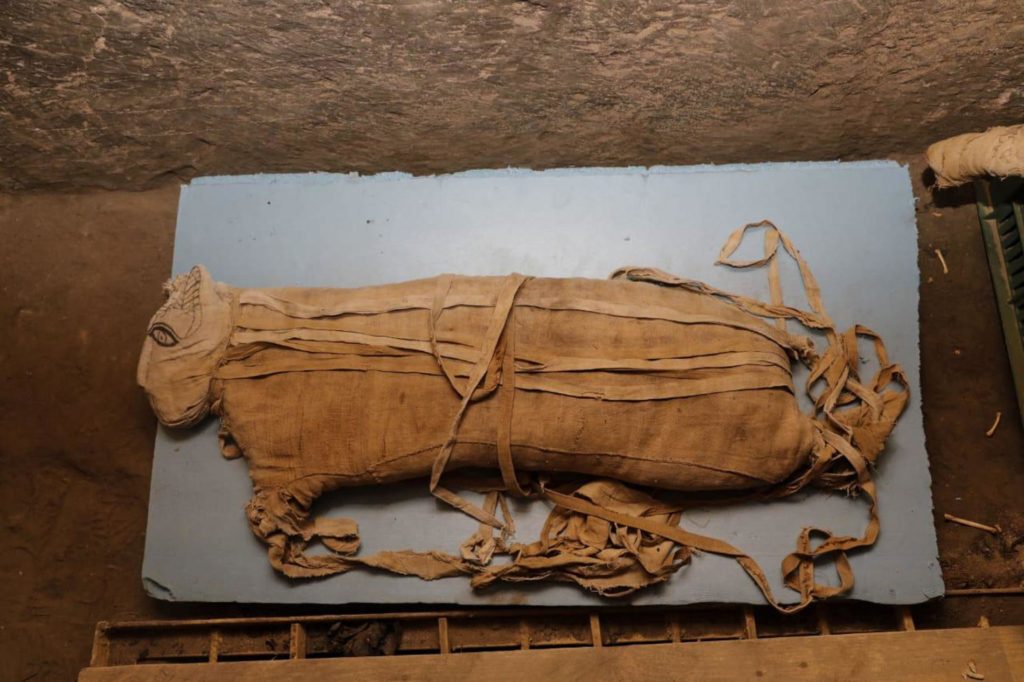 The ancient Egyptians had a quirk. The lion was among their most powerful symbols and yet, only one mummified.

lion had ever been found. The big cats are not a part of Egypt today, but back then, several prides lounged around the Nile. The royals even kept them as pets. So where were the bodies?

After digging through centuries and millions of mummies, the mystery endured. There had to be more than just the single lion since classical writers described the Egyptians mummifying the big cats. A break came in 2019. An excavation in Saqqara revealed a slew of domestic cat statues, cobras and crocodile mummies. Then the catacomb produced five feline-shaped mummies. To the team’s delight, they turned out to be lion cubs.

The ancient cubs died when they were eight months old. Their discovery could clarify why so few lions were embalmed despite being elite symbols. For this reason, one cannot help but wonder why the Egyptians deemed it important to put five lion mummies in the same place.

3. A Worthy Woman And Her Pet 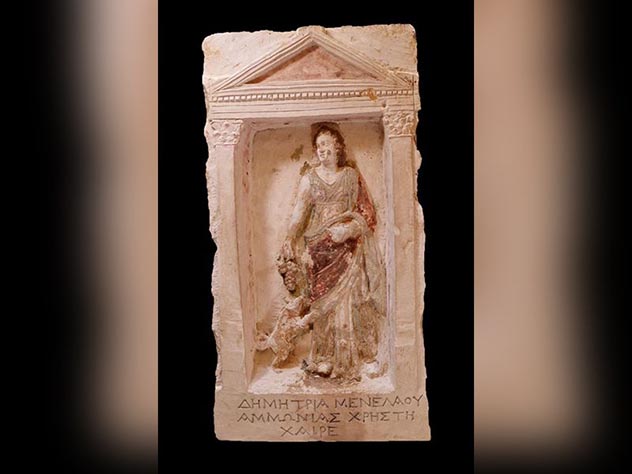 Another announcement in 2019 described the tomb of a woman. Archaeologists shoveled around the productive site of Saqqara when they unearthed a catacomb. It dated back 2,000 years ago when the Romans controlled Egypt. Indeed, the woman buried there was not an Egyptian.

Her name was Demetria. Greek inscriptions gave her closest relatives’ names and called her “worthy.” A carving inside the tomb depicted her in a beautiful dress while holding grapes. An animal, which was a pet but not clearly defined as any known animal, gazed up at Demetria with its paws on her dress. Several cat-like statues could also not be clearly identified as a particular species.

Images of Egyptian gods added to the magnificence of the underground chamber. An inscription below the deities gave the name of one Menelaos and described him as their servant. The Greek title given to describe his servitude was “Therapeutes,” something which is exceptionally rare in any Egyptian context. The term is not unknown but experts cannot agree on what a Therapeutes did for his masters or how these servants lived. 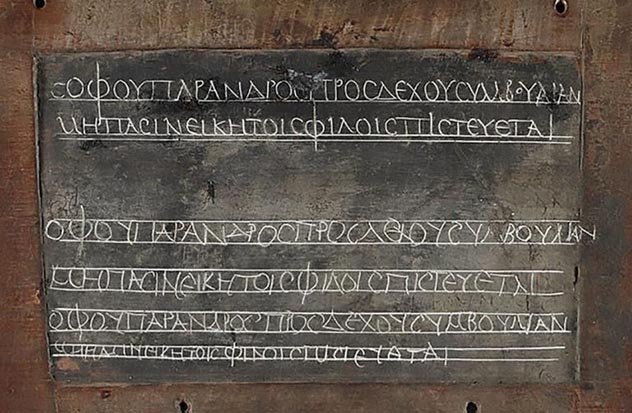 In 2019, the British Library took an artifact out of storage. The public last saw the tablet in the 1970s and visitors viewing the exhibition (which highlighted the history of writing), it looked downright modern. Along several lines, a child’s scrawl copied phrases written by an adult hand. Only it was not modern. The tablet was 1,800 years old.

The Egyptian student was required to copy two pearls of wisdom in Greek. Not only did he learn his letters but it was also an exercise of the mind. Instead of copying only characters, the adult’s writing warned him of bad friends and that wisdom should be sought from wise men only. The child was likely male since education among Egyptians was reserved for the boys of high-status families. This also explained why an Egyptian kid carved Greek into a tablet. Rome ruled his country during this time and all educated people in the Roman world were expected to know Greek and Latin.

5. Pieces Of A Missing Temple

Divers have been exploring Heracleion for about two decades. This ancient Egyptian city was a busy port but for some reason, disappeared under the water. The ruins were rediscovered 45 meters (148 feet) under the Mediterranean Sea. Several artifacts and buildings were cataloged but in 2019, an international team made the most significant find thus far – massive stone columns.

The monumental chunks probably belonged to the city’s main temple, called Amun Garp. Scanning equipment made the discovery possible, beaming images back to scientists without the need to shovel through tons of silt and fish. As a bonus, the scans also found a smaller Greek temple and shipwrecks stuffed with jewelry and coins. The dive also recovered another piece of a ceremonial boat found on another occasion.

The sunken city, sometimes called “Egypt’s Atlantis,” was built sometime during the eighth century. It had already produced magnificent architecture, treasures and colossal statues. Since about 95 percent of Heracleion remains unexplored, the city is bound to deliver more surprises.

Read the original article on Listverse

Previous article
YouTube Rewind 2019: These are the Most Watched Videos in South Africa for 2019
Next article
These are the Five Countries Leading the way in Fintech Innovation in Africa