While eating in africa, there are some things that you just should not be caught doing. Below are 7 dining taboos in africa 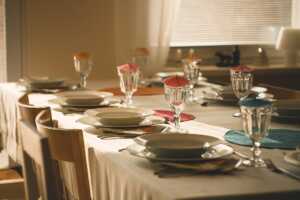 1. You Don’t Smell Your Food

Why some people don’t see anything wrong in smelling a plate of food, most West African countries see it as rude, as your host or hostess may think that you are smelling the food either because you think it isn’t prepared well, you think it is a stale food Or that you think it will make you sick.

2. Do Not Touch That Meat

In the whole of west africa, when an elder and a minor are eating from the same plate’ the minor must wait for the elder to take his own share of meat first before he takes his own. It is considered a very big taboo for a minor to take a piece of meat or fish before his elder’s. It is seen as a sign of lack of respect. And the minor is usually warned or spanked.

3. You Don’t Eat With Your Left Hand

In most african countries, eating and passing food is done strictly with the right hand and not the left. The left hand is considered unclean in virtually all african countries. So If you’re left handed you may have a little bit of a challenge eating in Africa.

In Nigeria and also in many other countries in Africa, It is considered an insult to leave food in your plate after eating. Especially when its served to you by a host/hostess. Apparently it makes them think you didn’t enjoy the food.

5. In Africa, Traditional meals are eaten from a communal plate, but you should not reach all the way across to the other side to grab food; it is expected from everyone to eat what is closest to him/her. And it must be done using his/her hands (right).

In some rural communities in Africa, it is a taboo for a married woman to eat from the same plate as her husband. They eat their food in the kitchen, or wherever the food was prepared before serving their husband his own portion.
She can watch him while he eats though.

7. You Don’t Eat While Standing

In some communities in Ghana and Nigeria, eating while standing especially when the food was served to you by someone, is considered to be rude. When you are served a dish, it is expected of you to sit down and consume everything.