The below list highlights some interesting and yet fascinating random facts gathered from the internet. The one about Pius II before he became a pope is my favourite. 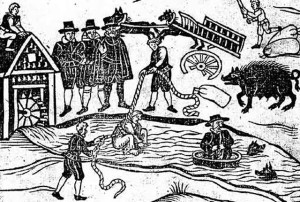 In Medieval times, the accused of a crime often faced a “trial by ordeal,” where they were forced to stick their arm into a vat of boiling water. If their arm emerged unscathed, it was believed God protected them, thus proving their innocence.

. The tale of two lovers

Here are the ingredients the early romans used to prepare a good “toothpaste”: “Ashes, head of hare, donkey teeth, extracts of mouse brain or hare”, and bicarbonate sodium. source

Soviet biologist Ilya Ivanovich Ivanov attempted to impregnate a chimpanzee with human sperm, but failed in his quest to make a “humanzee.”

In 16th-century Canada, the women practiced a form of contraception where they drank a potion with grounded beaver testicles.

he Ottoman Empire’s Sultan Ibrahim I had 280 of his concubines drowned in the ocean after one of them slept with another man.

Being too warm at night can trigger nightmares. Experts suggest the reason for this is because heat triggers the body’s fight-or-flight response, a mechanism linked to survival and heightened anxiety/anticipation.