Asmat: The Tribe In New Guinea Where Cannibalism Used To Be A Thing.

Located in the New Guinea in the Papua province of Indonesia lies the Asmat people. Although the meaning of Asmat is often disputed with some claiming it means man from tree while her neighbours, the Mimika, say the name means man-eater, the Asmat refer to themselves as Asmat-ow meaning real people.

Asmat is made up of 12 sub -ethnic groups with over 100 villages and her people live in a place that is largely unexplored. 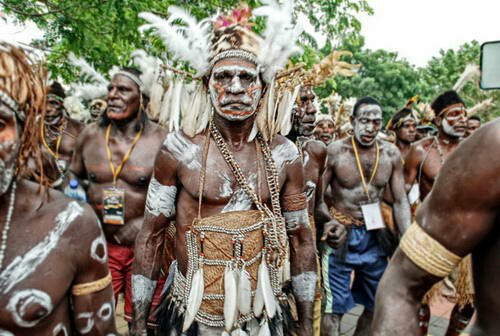 Until the 1970’s, the Asmat tribe did not have regular contact with the western world. During this time, they were not living in the Stone Age [yet]. This is because stone itself was highly unavailable. It wasn’t until the regular visit of the missionaries [in the 1970’s ] that they were introduced to knives , axes, and other metal items.

The Asmat are a deeply religious people who believe in the ancestral worship. Their ancestors are represented by wooden canoe carvings and figurines

Until the 1980’s, Asmat men showed their prowess and loyalty to their kinsmen by killing an enemy so they (the kinsmen) can eat. The head was prepared for consumption by baking and scraping off the skin of the head.

They often likened a man to a “tree”. A man’s head was considered the tree’s “fruit” and was used for their initiation rites. The initiation procedure was done by placing the head between the thighs of the intended initiate to get its power. This was partly guided by the belief that once a man is killed and eaten, his powers and skills get transferred to them.

The “fruit” (human head) is very precious to them such that during burials, they cut it off and the head is used as a pillow.

Sometimes After eating, the lower jaws or other parts of the human vertebrae were used as trophy pendants.

Their homes typically are built near rivers. Their strategy was simple: Build houses close to the river so that when a potential enemy surfaces, they attack.

Asmat did not only hunt for skulls, they also worshipped them. The skulls of the deceased were stripped of the brain and the eyes and nasal parts were closed up in order to prevent evil spirits to enter or exit the body. Skulls that were modified and decorated in this way, were displayed by the Asmat in a honorable place in their long homes.

Fortunately, the evil reputation of Asmat has become history and we have the missionaries to thank for that.