Ayam Cemani: The Most Expensive Chicken In The World is Entirely Black

The Ayam Cemani an inky black chicken breed indigenous to Indonesia has been dubbed as the most expensive chicken in the world, going as much as $2500.
The name for the chicken is derived from the name of the village where the chicken is bred, Cemani, and the Indonesian name for chicken, Ayam 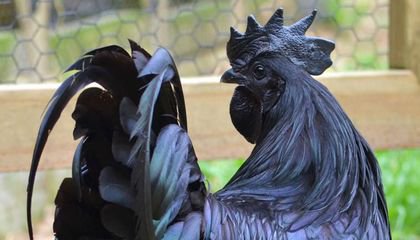 Ayam Cemani is an uncommon and relatively modern breed of chicken from Indonesia. They have a dominant gene that causes hyperpigmentation (fibromelanosis), making the chicken entirely black, including feathers, beak, and internal organs.

This unusual coloring extends to the breed’s internal features, including its organs, muscles and bones; the chicken’s meat, are all colored black “, the exceptions to this trend are the Cemani’s blood and eggs.

The breed originated from the island of Java, Indonesia. The breed was first described by Dutch colonial settlers.

The Ayam Cemani is one of four chicken breeds with black internal organs and bones.

Leif Andersson, a geneticist at Sweden’s Uppsala University who led a 2011 study on the unusual phenomenon, tells National Geographic ’s Bittel that members of all four affected breeds can trace the mutation back to a single ancient chicken: “What is interesting is that all chickens with this phenotype carry exactly the same mutation,” he says. “It suggests that some humans saw these black birds and were excited about them, kept them, and sold them and they spread over the world.”

The Ayam Cemani are commonly available in Indonesia, they are sold in the market according to their grade which depends on their size and the darkness of their meat and body. These chickens could range from $50 to $2500 depending on the quality and breed of the chicken. The most expensive is the Indonesian King breed which costs up to $2500.

Veronika Kusumaryati, an anthropologist at Harvard University, says the breed was traditionally associated with local elites and royalty. Used in rituals as early as the 12th century, the Cemani acted as a messenger between human and supernatural realms. Javanese lore maintains that “ the world is occupied by spirits, good and bad, whose power can be mobilized to help people to gain power, reputation, and wealth. For these purposes, one should offer Cemani chicken, as the ghost and spirits love Cemani chicken’s meat and blood.”