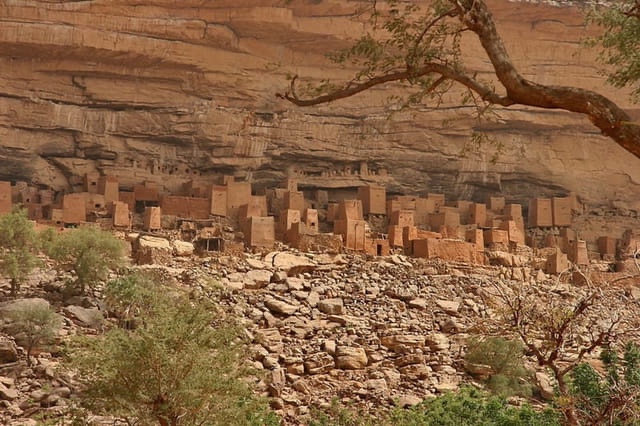 The Bandiagara Escarpment is an escarpment in the Dogon country of Mali. The sandstone cliff rises about 1,600 ft above the lower sandy flats to the south and stretches for about 150 kilometers. The area is noted by the UNESCO as “an outstanding landscape of cliffs and sandy plateaux with some beautiful architecture.” The Bandiagara site is considered one of West Africa’s most impressive features, due to its geological and archaeological features as well as its ethnological importance.

For almost 1000 years, the Dogon people, had faced religious and ethnic persecution—through jihads by dominant Muslim communities. These jihadic expeditions formed themselves to force the Dogon to abandon their traditional religious beliefs for Islam. Such jihads was what prompted the Dogon to abandon their original villages in the 14th century and move up to the cliffs of Bandiagara for better defense and to escape persecution. 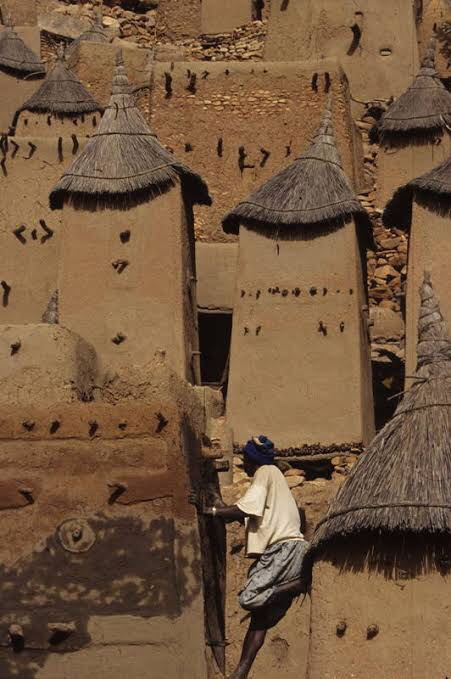 When they got there, they found the escarpment already inhabited by the Tellem tribes, who had already built dwellings around the base of the escarpment and carved burial caves high up on the cliff-face so that they could bury their dead high up, far from the frequent floods of the area.

Originally, the Dogons shared the escarpment with the Tellem, but gradually the indigenous people were pushed out and the Tellem disappeared leaving their dwellings behind. Many of the dwellings and structures they left behind survived for centuries and are still visible in the area till this day. 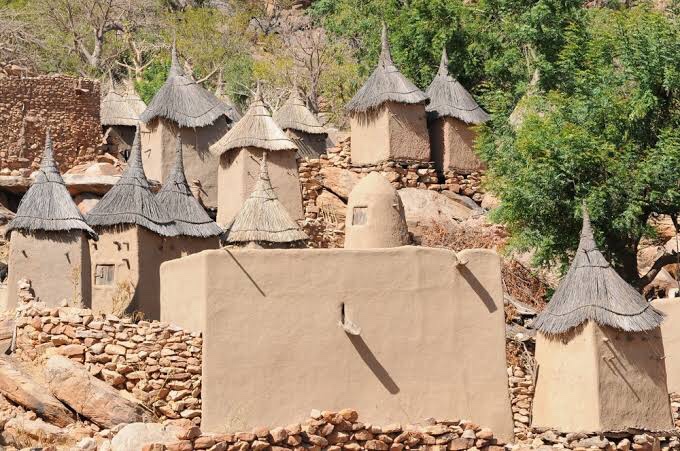 The first Dogon settlement was established in the extreme southwest of the escarpment. Over time, the Dogon moved north along the escarpment, over the plateau, and the plains of the Seno-Gondo to the southeast. Today, the “Land of the Dogons” encompass over 400,000 hectares and includes nearly three hundred villages scattered along the length of the Bandiagara Escarpment.

On average, a Dogon village contains around 44 houses organized around the ‘ginna’, or head man’s house and contain a Tógu nà (a building only for men), a Punulu (a house for menstruating women on the village border), and a male and female granary for storage. Each village is composed of one main lineage traced through the male line. Houses are built extremely close together, many times sharing walls and floors. The dramatic landscape has been a UNESCO World Heritage Site since 1989.

The Dogon are best known for their religious traditions, their mask dances, wooden sculpture, and their architecture.

The Bandiagara Escarpment and the Dogon culture today is one of Mali’s major tourist attractions and draws a large number of tourists to Mali each year.