Code Noir: The Decree that Once Regulated the Lives of African Slaves in French Colonies

The Code’s sixty articles regulated the life, death, purchase, religion, and treatment of slaves by their masters in all French colonies. 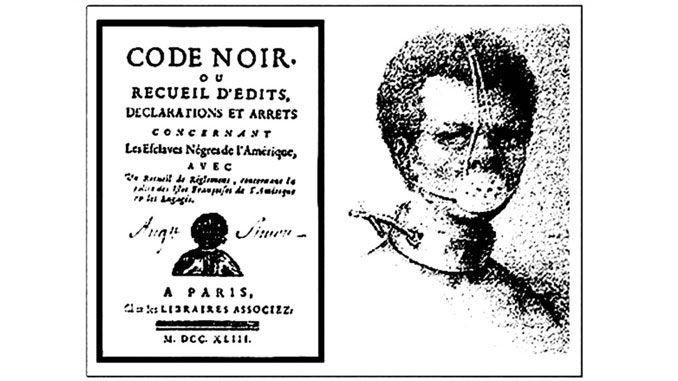 The Code Noir also known as the Black Code was a decree originally passed by France’s King Louis XIV in 1685. The Code Noir defined the conditions of slavery in the French colonial empire, restricted the activities of free black slaves, forbade the exercise of any religion other than Roman Catholicism.

The code further provided that the slaves should be baptized and educated in the Catholic faith. It prohibited masters from making their slaves work on Sundays and religious holidays. It required that slaves be clothed and fed and taken care of when sick. It prohibited slaves from owning property and stated that they had no legal capacity. It also governed their marriages, their burials, their punishments, and the conditions they had to meet in order to gain their freedom.

The code has been described by Tyler Stovall as “one of the most extensive official documents on race, slavery, and freedom ever drawn up in Europe”.

Robert Giacomel, a French attorney, called the Black Code a crime against humanity in his book Le Code Noir, autopsie d’un crime contre l’humanité (“The Black Code, Autopsy of a Crime against Humanity”).

In 60 articles, the document specified the following:

Jews could not reside in the French colonies (art. 1)

Slaves must be baptized in the Roman Catholic Church (art. 2)

Public exercise of any religion other than Roman Catholicism was prohibited; masters who allowed or tolerated it by their slaves could also be punished (art. 3)

Only Catholic marriages would be recognized (art. 8)

Rules about sexual relations and marriage

Children between a female slave and a free man:

If the father was else unmarried, he should marry the slave concubine, thus freeing her and her children from slavery

Otherwise the punishment would be a fine for both the father and the slave’s master. The fine was 2000 pounds of sugar (art. 9)

If the father was a slave’s master, in addition to the fine, the slave and any resulting children would be removed from his ownership, but not freed (art. 9)

Slaves must not carry weapons except under permission of their masters for hunting purposes (art. 15)

Slaves belonging to different masters must not gather at any time under any circumstance (art. 16)

Slaves should not sell sugar cane, even with permission of their masters (art. 18)

Slaves should not sell any other commodity without permission of their masters (art. 19 – 21)

Masters must give food (quantities specified) and clothes to their slaves, even to those who were sick or old (art. 22 – 27)

(unclear) Slaves could testify but only for information (art. 30-32)

A slave who struck his or her master, his wife, mistress or children would be executed (art. 33)

A slave husband and wife and their prepubescent children under the same master were not to be sold separately (art. 47)

Fugitive slaves absent for a month should have their ears cut off and be branded. For another month their hamstring would be cut and they would be branded again. A third time they would be executed (art. 38)

(unclear) A master who falsely accused a slave of a crime and had the slave put to death would be fined (art. 40)

Masters may chain and beat slaves but may not torture nor mutilate them (art. 42)

Masters who killed their slaves would be punished (art. 43)

Slaves were community property and could not be mortgaged, and must be equally split between the master’s inheritors, but could be used as payment in case of debt or bankruptcy, and otherwise sold (art. 44 – 46, 48 – 54)

Slaves who were declared to be sole legatees by their masters, or named as executors of their wills, or tutors of their children, should be held and considered as freed slaves (art. 56)

Freed slaves were French subjects, even if born elsewhere (art. 57)

Fees and fines paid with regard to the Code Noir must go to the royal administration, but one third would be assigned to the local hospital (art. 60)

The Code can be read in its entirety here.

Slavery was abolished in France on February 4, 1794. The decree stated:

“The Convention declares the slavery of the blacks abolished in all the colonies; consequently all men irrespective of color living in the colonies are French citizens and shall enjoy all the rights provided by the Constitution.”

Unfortunately, none of the implementing measures were taken, and slavery was reinstated by a decree of July 16, 1802, while Napoleon Bonaparte was First Consul. It was definitively abolished by a decree of April 27, 1848, on the initiative of Victor Schoelcher with a general and unconditional emancipation.

The Black Code had remained in force for 163 years.

There is no better weapon to arm yourself with than knowledge, and no better way to move forward than to learn from the past.