The 2018 ranking on terrorism is out and Nigeria, for the fourth consecutive year, occupies the third position among the countries worst hit by terrorism, globally, because of the activities of Boko Haram and herdsmen. 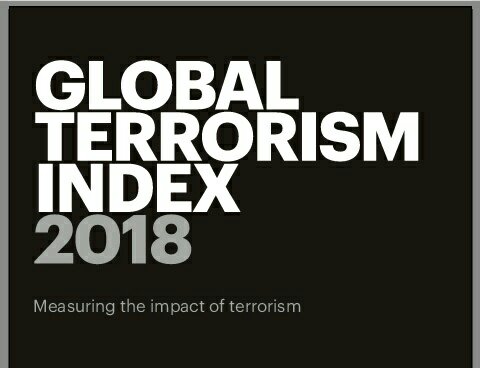 The GTI, which is in its sixth edition, is produced annually by the Institute for Economics & Peace, an independent, non-partisan, non-profit think tank with offices in Sydney, New York, and Mexico City.

The index provides a comprehensive summary of the key global trends and patterns in terrorism. It produces a composite score in order to provide an ordinal ranking of countries on the impact of terrorism. It is an attempt to systematically rank the nations of the world according to terrorist activity.

The good news, however, is that there has been a reduction in the number of deaths caused by terrorism in Nigeria in 2017, just like the other three preceding years, according to the report.

The report also highlighted the effectiveness of the counter-insurgency operations undertaken in Nigeria and its neighbours, Cameroon, Niger, and Chad,”, adding that the world has also experienced a drop in deaths from terrorism in 2017.

The increase in the impact of terrorism was greatest in the Middle East and North Africa, followed by sub-Saharan Africa.

In 2017, Al-Shabaab overtook Boko Haram as the deadliest terror group in Sub-Saharan Africa. The other most active terror groups in the region in 2017 were the Fulani extremists, Sudan People’s Liberation Movement in Opposition (SPLM-IO) and the Union for Peace in Central Africa (UPC). These three groups were collectively responsible for 15 per cent of deaths throughout Sub-Saharan Africa in 2017.

The deadliest terror attack in the world in 2017 occurred in Sub-Saharan Africa, following the Al-Shabaab suicide-bombing in Mogadishu, Somalia that killed 588 people. The second and third deadliest terror attacks both occurred in the Central African Republic, following two armed assault attacks in May 2017 that killed 133 and 108 people each. The former attack was carried out by the splinter-Seleka Fulani faction UPC, while the latter was carried out by Anti-Balaka Christian extremists.

There are two Sub-Saharan African countries amongst the GTI ten most impacted: Nigeria, and Somalia, ranked third and sixth respectively. The most notable deterioration in Sub-Saharan Africa came from Angola whose GTI ranking deteriorated by 76 places in 2017. The reason for this deterioration came from a chemical gas attack against a regional convention of Jehovah’s Witnesses in Luanda, Angola that injured 405 people. The attack was carried out by the National Union for the Total Independence of Angola (UNITA).

In Nigeria in 2018, there has been a dramatic increase in violence involving Fulani extremists even as deaths committed by Boko Haram are falling.

According to Listwand’s analysis of the list, these are the most Terrorised countries in Africa, 2018:

The GTI monitores and measures the impacts of terrorism in 163 countries, which covers 99.7 per cent of the world’s population.