While female slaves in the U.S. could be made to sing and dance at their masters whim, male slaves also had the difficult task of fighting for the masters in what was a great source of entertainment and income for the local plantation owners they slaved for. 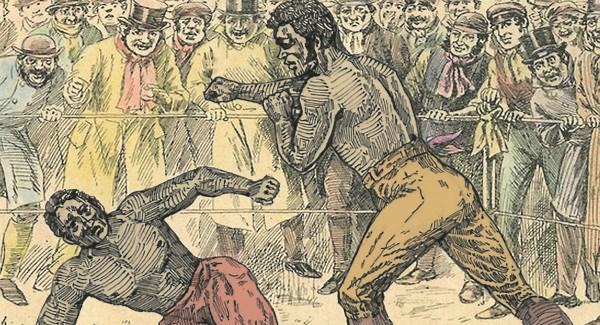 Fights involving bare-knuckles were arranged by the slave owners for their physically imposing slaves on the same farm to determine who was the strongest.

Those who endure and beat the other enslaved are pitted against champions of the other plantations and so it continues.

Although The fights went by many names Battle Royale, Nigger fights, Free for Alls, Rough and Tumbles, the one thing that connects all together was the brutality involved.

A former enslaved on a cotton plantation named John Finnely recalled watching slave fights also known as ‘Nigger Fights’ where masters of different plantations matched their slaves by size and then bet on them.

He added that his master had an enslaved named Tom who weighed 150 pounds and was an “awful good fightah ” adding he was “quick lak a cat an’ powe’ful fo’ his size an’ he lak to fight.” Finnely added that Tom always won his fight quick with no one lasting long with him.

The enslaved males are put in a ring or circled to beat each other till near-death while earning little reward or sometimes none at all.

This scene was very common at many carnivals, fairs, and boxing matches throughout the American landscape. Blindfolded African American men and boys beat each other black and blue for the comedic pleasure of the white audience and in the hopes of winning a few dollars. These battle royal matches were held at many types of venues and involved anywhere from four to thirty blindfolded “negroes.” Advertisements for these events typically promoted them as comic events with “Negro” or “Colored” combatants.

Here is one account of how these Battle Royals worked.

A ring was drawn on the ground which ranged from about 15 ft. to 30 ft. in diameter depending on the number of contestants who engaged in the combat. Each participant was given a kind of bag that was stuffed with cotton and rags into a very compact mass. When so stuffed, the bags would weigh on an average of 10 pounds, and was used by the contestants in striking their antagonist.

Each combatant picked whichever opponent he desired and attempted to subdue him by pounding him over the head with the bag, which he used as his weapon of defense. And which was used as an offending weapon.

The contest was continued in this manner till every combatant was counted out, and a hero of the contest proclaimed. Sometimes two contestants were adjudged heroes, and it was necessary to run a contest between the two combatants before a final hero could be proclaimed.

Then the two antagonist would stage a battle royal and would continue in the conflict till one was proclaimed victorious. Sometimes these Free-For-All battles were carried on with a kind of improvised pair of boxing gloves, and the contests were carried on in the same manner as previously described.

Very often, as many as 30 darkies of the most husky type were engaged in these battles, and the contests were generally attended by large audiences. Being staged during the period of favorable weather, and mostly on Saturday afternoon; these physical exhibitions were the scenes of much controversial conflict, gambling, excessive inebriation and hilarity.~ Frederick Douglass, 1818-1895.

The Godfather of Soul, James Brown spoke of his experience as a boy in a battle royal:

“Because of my reputation the other kids always pointed me out to the white men who came around to recruit scrappy black boys to be in the battle royals they put on at Bell Auditorium. In a battle royal they blindfold you, tie one hand behind your back, put a boxing glove on your free hand, and shove you into a ring with other kids in the same condition. You swing at anything that moves, and whoever’s left standing at the end is the winner.” (James Brown: The Godfather of Soul, an Autobiography , 1986)

Jack Johnson nicknamed the Galveston Giant, became the first African American world heavyweight boxing champion when he knocked out the reigning champ, Tommy Burns. Johnson held on to the title until 1915 and continued to box until he was 50 from 1908–1915, is said to have emerged from the process in Galveston, Texas. Johnson’s parents were both enslaved.

Like Jack Johnson, another Black boxing great; Tom Molineaux born a slave on a plantation farm in Virginia in 1784 boxed his way to freedom.

Tom Molineaux earned his freedom after winning a boxing match against a slave from a rival plantation. He is said to have won his master a total of $100,000 from that fight. Molineaux’s slave owner was so pleased with him, that he granted him his freedom plus a sum of $500 as a reward for a job well done.

Aside from the great economic fortunes the slaves brought their masters by slaving on their plantations. The Slaves made their masters huge income by participating ‘most times forcefully’ in Battle royals and bare-knuckle fights.

Previous article
Oscars 2020: Nigeria’s Cynthia Erivo is the Only Black Oscar Nominee
Next article
The Two-Headed Boy of Bengal: His Life, Early Death and Dissection