Kusasa Fumbi: The Sexual Rite Of Passage Practiced in Parts of Africa

Kusasa Fumbi “Sexual cleansing” is a common practice in several African countries where a woman is expected to have sex after her first period, after becoming widowed, or after an abortion, as a cleansing ritual.

For young girls Kusasa Fumbi is considered a rite of passage and a form of initiation of young girls into womanhood.

The term Kusasa Fumbi literally means “brushing off the dust” and can be interpreted as shaking off inexperience in sex by actually practising it. It is a common practice in parts of Zambia, Malawi, Uganda, Tanzania, Mozambique, Angola, Ivory Coast, and Congo.

In the villages where this, girls as young as ten are taken to a secluded camp where they would be initiated They are accompanied by older women known as “anamkungwi”, or “key leaders”. 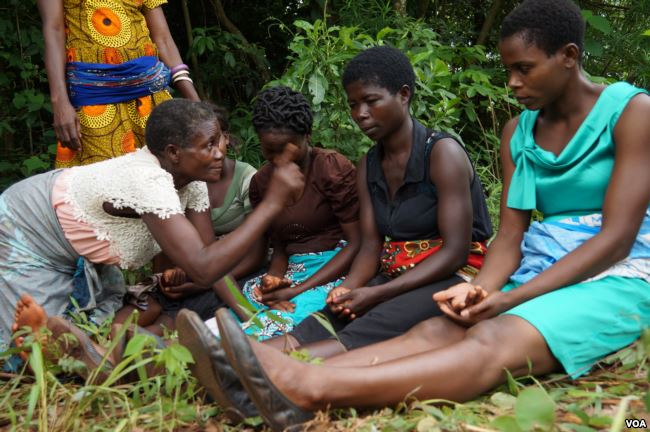 At the initiation camp, the girls are instructed on respect for elders, cooking, good manners, decency, cleanliness, proper sexual behavior and fertility.

The girls are also taught a dance known as “chisamba“ as a way of preparing them for their role of satisfying their husbands in bed.

” I gives girls these lessons so that they should keep their man and prevent him from going out to look for another woman. Because, if he goes out and finds excitement in other women, he is likely to dump her” Says Agnes Matemba, an initiation counselor.

The girls are encouraged the girls to “practice” what they had learned. They are often told that if they don’t have sex upon concluding the initiation, their skin will become dry and brittle. This will mark them for life, and they will be ostracized if they don’t complete the custom as their mothers and grandmothers did before them.

On the last day, the girls are made to have sex with a paid sex worker who is known as “ hyena”. The hyena is a traditional position held by a man who initiates young women into adulthood by having sex. The ritual requires the exchange of sexual fluids so condoms are not used.

The ‘Hyenas’ are chosen for their moral character and are believed to be incapable of catching diseases such as HIV/AIDS (which of course is false).

On 26 July 2016, President Peter Mutharika ordered the arrest of one Eric Aniva a few days after he featured in a BBC broadcast ”‘Stealing Innocence’ in Malawi“. He was sentenced to two years in prison for having sex with more than 100 women and girls and not disclosing his HIV status.

Initiation is a centuries-old practice in the region, according to Harriet Chanza of the World Health Organization. The emphasis on having sex may also have a darker purpose in a country where nearly three-fourths of the population lives below the poverty line.

Chanza, who is based in Malawi, says that some parents may actually want their daughters to get pregnant at a young age. A girl is often married soon after she is found to be pregnant, deferring the cost of caring for her and her baby from her parents to her husband.

Currently child campaigners are working with initiation counselors and traditional leaders to tone down Malawi’s initiations. Already, some areas are banning the practice of encouraging sex after the ceremony.

“This is a traditional cultural thing that people believe in, and it will be very difficult to just say let us end initiation ceremonies,” Mkandawire executive director of YONECO said. “But what we are saying is that can we package the curriculum in such way the young people are accessing the correct curriculum at the correct time?”

Sexual cleansing also happens in other life stages, If a woman has an abortion, for example, sexual cleansing is required. Also, if a man dies, his wife is required by tradition to sleep with an hyena before she can bury him.

Typically, after sex, the widow burns her clothes, and the man shaves the widow’s hair often outside so that the neighborhood can witness that the widow is now cleansed.

After the cleansing, the widow is traditionally inherited, whereby she marries another man.

Widow cleansing as a cultural practice was outlawed in Kenya in a 2015 domestic offences bil. But there are still dark stories of it still being practiced.