Ada Priscilla Nzimiro was a trained medical doctor from Imo State who earned her Bachelor of Medicine, Bachelor of Surgery (MB ChB) from the University of Glasgow in 1950 and returned to Nigeria, where she died the following year. 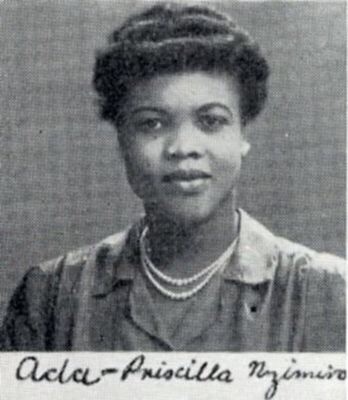 Ada Priscilla Nzimiro was born in Port Harcourt, on 30 April 1923. She was the daughter of Richard Nzimiro and his wife Mary Nwametu Onumonu.

Her father was a politician who served as the first mayor of Port Harcourt from 1956 until his death in 1959. While Her mother, was a pioneering Nigerian businesswoman, politician and women’s activist who was also among the richest individuals in West Africa, around the 50’s.

In 1945, Nzimiro enrolled at the University of Glasgow in Scotland for her university education where she studied medicine. She graduated MB ChB in 1950 at age of 26 becoming the first female medical doctor in the Igbo region of Nigeria.

On 22 March 1951, Nzimiro died in Glasgow Royal Infirmary at the age of 27. Her death was a shock to many people including her parents, relatives and well-wishers. Later reports suggested that the cause of her death was unnatural. She was buried in her hometown Oguta on 27 April 1951.

As the first female medical doctor from her region, Nzimiro inspired many young Igbo ladies to pursue a career in the medical field.

After Nzimiro’s death, the William Wilberforce Academy (WWA), which was the first of two secondary schools her parents established at Oguta in 1945, was renamed to Priscilla Memorial Grammar School. This was done in order to honour her memory and record her achievement in the field of medicine.