Born Omoba Aina, Sarah Forbes Bonetta was an Egbado princess of the Yoruba people, who was taken to England and presented to Queen Victoria as a “gift” from the king of the Blacks to the Queen of the Whites. This is the story of how she spent her life between the British royal household and her Native country Nigeria.

Sarah Forbes Bonetta, originally called Omoba Aina, was born in 1843 in Oke-Odan, a village in present day Ogun state, Nigeria. A Yoruba princess of the Egbado clan, she lost her parents and siblings during a brutal attack on her village by the Dahomey army in 1848. Aina’s parents were decapitated during the attack and her siblings slaughtered. Other residents of the village were either killed or sold into slavery.

The now orphaned princess was taken and kept as a slave in the court of King Ghezo, a notorious slave trader. Aina who was supposedly fated to be used as a human sacrifice was eventually rescued by Captain Frederick E. Forbes, a Lieutenant of the Royal Navy who visited king Ghezo of Dahomey as a representative of Queen Victoria, on a mission to discourage the king from engaging in slave trade. At the meeting Aina was given to Captain Forbes as a show of good faith. He later wrote in his journal: “She would be a present from the King of the Blacks to the Queen of the Whites.”

Captain Forbes took Aina back to England, renaming her Sarah Forbes Bonetta after himself and his ship, the HMS Bonetta. Forbes was very fond of her and impressed by her quick learning and talent for music, writing that she was a “perfect genius”.

When she arrived in England, at just six years old, Sarah was presented to Queen Victoria, who agreed to become her protector. The Queen was impressed by the young princess’s exceptional intelligence, and had the girl, whom she fondly called Sally, raised as her goddaughter in the British middle class.

Under the Queen’s care, Sarah received a formal education and was exposed to the finest Victorian society had to offer. She was highly intelligent and excelled in her studies, which included subjects such as history, literature, and mathematics.

In 1851, when she was aged eight, Sarah developed a chronic cough, which was attributed to the cold climate of Great Britain. Her guardians sent her to school in Africa in May of that year. She attended the Annie Walsh Memorial School (AWMS) in Freetown, Sierra Leone. In the school register, her name appears only as Sally Bonetta, pupil number 24, June 1851, ward of Queen Victoria.

When she was 12 years old, Queen Victoria commanded that Sarah return to England, where she was placed under the charge of Mr and Mrs Schon at Chatham.

The Queen Victoria provided her with an allowance for her wellbeing and invited her to visit Windsor Castle regularly. Sarah’s brilliance earned her admiration among the royal court, and she continued to stun her tutors with her advanced abilities in all subjects.

At 18, Sarah received a marriage proposal from James Pinson Labulo Davies, a 31-year-old wealthy Yoruba businessman residing in Britain, and they tied the knot in 1862.

They had their Wedding at St Nicholas’ Church in Brighton, East Sussex, in August 1862.

The wedding party, which arrived from West Hill Lodge, Brighton in ten carriages and pairs of grays, was made up of “White ladies with African gentlemen, and African ladies with White gentlemen” There were sixteen bridesmaids.

After their wedding, the couple moved back to Nigeria and settled in Lagos, where her husband became a member of the Legislative Council from 1872-74.

In 1863, shortly after her marriage, Sarah had her first daughter and was granted permission by the Queen to name her Victoria. The Queen also became the baby’s Godmother.

In 1867, Sarah, along with her daughter, went to see the Queen and then returned to Lagos where she gave birth to two more children, Arthur and Stella Davies.

Sara Forbes Bonetta continued to enjoy a close relationship with Queen Victoria so much so that she and Bishop Samuel Ajayi Crowther were the only indigenous people from Lagos that the Royal Navy was instructed to rescue in case of a revolt.

Sara Forbes Bonetta passed away from tuberculosis on August 15th, 1880 in Funchal, the capital of Madeira Island. She was laid to rest the next day at the British Cemetery of Funchal.

To honor her memory, her husband erected a granite obelisk-shaped monument more than eight feet high in memory of Sara Forbes Bonetta at Ijon in Western Lagos, where he had established a cocoa farm. The inscription on the obelisk reads.

Wife of the Hon J.P.L. Davies who departed this life at Madeira August 15th 1880 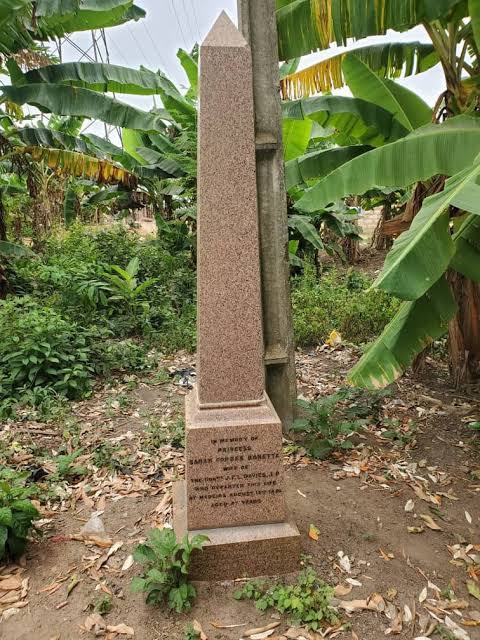 After Sarah’s death, James continued to raise their children and to support various causes, including education and anti-slavery efforts. Their children went on to lead successful lives, with Victoria marrying a prominent Yoruba man.

A film about Sarah’s life is currently being developed by BBC Film. The upcoming film tells the story of a determined heroine who found a way to embrace her Blackness, Africanness, and eventually find love by forging a path for herself that honored both her heritage and upbringing.

Previous article
The Origin Story of the Bukusu People of East Africa
Next article
Seriki Williams Abass: The Former Slave Who Later Became A Renowned Slave Merchant in Yorubalamd