Shark Island or “Death Island” was one of five concentration camps in German South West Africa. It was located on Shark Island off Lüderitz, in the far south-west of the territory which today is Namibia. 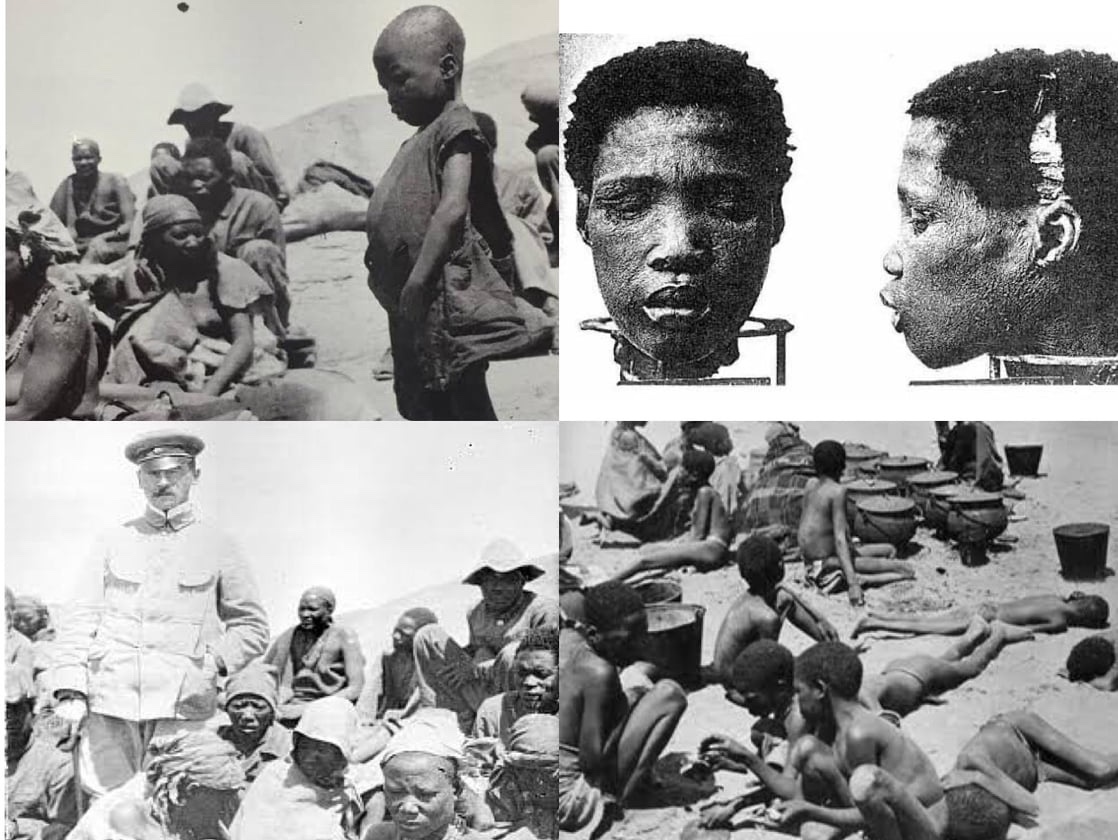 The island was used by the German Empire during the Herero and Namaqua genocide of 1904–1908 to imprison Heroros and Namas who survived the desert. Around 70 per cent of its inhabitants died in the camp between its opening in 1905 and its closing in April 1907. 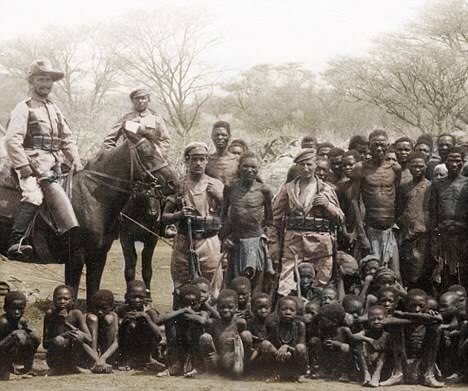 On 12 January 1904, the Herero and the Nama people of Namibia rebelled against German colonial rule under the leadership of the brave Heroro Paramount Chief Samuel Maharero

Origins of the Herero revolt date back to the 1890s when ethnic groups settled in Namibia came under pressure from the growing number of German settlers wanting their land, cattle, and forced labor.

Other Factors such as loss of property, increasing debt in an attempt to resettle lost herds, low wages on white-owned farms, and racial inequalities only intensified the hostility between the Herero and the Germans.

When the Herero rebelled, they killed over 100 German settlers near the town of Okahandja.

Two months later, the Nama people broke out in a similar rebellion against German colonists. Traditional rivalries prevented the Herero and Nama from joining together, however both groups continued fighting guerrilla warfare against the German colonial forces.

The frequent attacks from both the Heroros and the Namas prompted the governor of the region Leutwein to request reinforcements and an experienced officer from the German government in Berlin. Lieutenant-General Lothar von Trotha was appointed Supreme Commander of South West Africa on 3 May 1904, arriving with an expeditionary force of 14,000 troops on 11 June.

On his arrival, General Lothar von Trotha gave the order that all native Herero people needed to be exterminated to make space for German colonists. He specifically ordered that the soldiers show no mercy to women and children.

The first phase of the genocide was characterised by widespread death from starvation and dehydration, due to the prevention of the Herero from leaving the Namib desert by German forces. Once defeated, thousands of Hereros and Namas were imprisoned in concentration camps, where the majority died of diseases, abuse, and exhaustion.

The intent of these killings was to rid the colony of people viewed as expendable and thus gain access to their land. 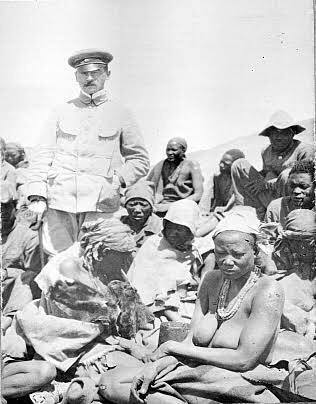 Prisoners were housed in whatever tents were available, with very little to protect them from the very cold environment. They were beaten and raped by their captors on a daily basis.

The majority died of exposure, hunger, disease and cold. Prisoners died at a rate of about eighteen a day. According to reports, their bodies were buried in shallow graves on the beach at low tide and when the incoming tide washed them into the sea, sharks devoured their remains.

Despite this high initial rate of mortality on the island, the German authorities continued to transfer people from the interior to the island, because they wished to use the prisoners as labour in constructing a railway connecting Lüderitz with Aus.

One missionary described a scene of an African woman lying on the ground and wasting away. When she asked for water from fellow prisoners, a German soldier shot her five times, outraged that she would have the audacity to ask for anything.

The prisoners on the island were forced into hard labour as slaves. Thousands of women were victims of sexual violence inflicted by German soldiers. They were given some rice for their efforts, but nothing more. Many died as a result of the poor diet and severely exhaustive work. 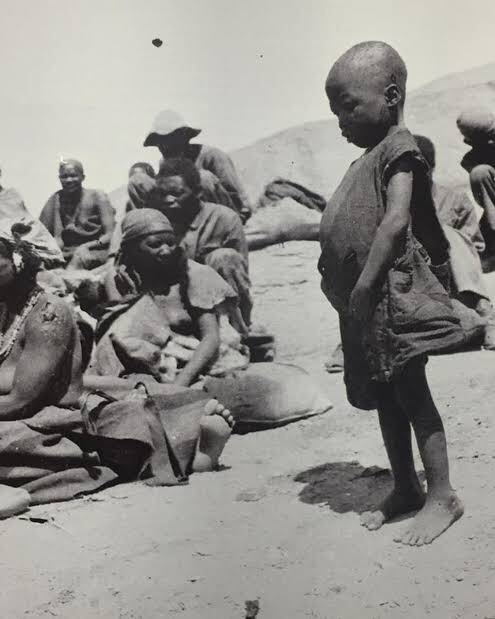 But a sinister new idea was forming in the evil minds of the governors of German South-West Africa. An ‘anthropologist’ was commissioned to investigate the prisoners, who reported that it was of ‘vital importance’ for the success of the German colonial project that those races deemed ‘unfit for labour’ should be allowed to disappear. ‘The struggle for our own existence’ depends on it, he warned.

While all these were going on, German doctors were busy conducting experiments on the prisoners.

Dr. Eugene Fischer conducted medical experiments on children born from the rapes that occurred in the camp. His conclusion was that children born out of bi-racial unions were “inferior” to their German fathers. 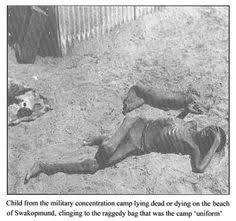 Most notorious of all was the Shark Island camp physician, was Dr Bofinger. He carefully decapitated the bodies of 17 prisoners, including a one-year-old girl. After breaking open the skulls he removed and weighed the brains before placing each head in preserving alcohol and sealing them in tins for export to the University of Berlin in Germany. In total, more than 3,000 skulls belonging to the Herero and Nama people were sent back to Germany for further experimentation.

The captured women were forced to boil heads of their dead inmates and scrape remains of their skin and eyes with shards of glass, preparing them for examinations by German universities.

These experiments were conducted by the German doctors to develop their race theories about the evolutionary proximity of black Africans to apes.

Other experiments were conducted on live prisoners. In a spurious bid to determine whether scurvy – an illness caused by poor nutrition – was contagious, Bofinger injected prisoners with arsenic and opium, ‘opening up the bodies’ after they had died. No one who went into Dr Bofinger’s field hospital came out alive.

After two years, the camp was forced to close down in 1907 – 70 per cent of its inhabitants were dead, and of those still alive a third were so sick the camp commander believed ‘they were likely to die in the near future’. After their release, surviving Hereros and Namas were distributed as labourers for settlers in the German colony. All Hereros and Namas over the age of seven were also forced to wear a metal disc with their labour registration number, they were also banned from owning land or cattle.

In 1914, World War I broke out and the following year the South African Army seized the colony. Germany’s African empire had ended and, after the war, Namibia became a South African mandate, finally achieving independence in 1990.

The terrible events that took place at Shark Island, which has been called the “blueprint” for what the Nazis did to the jews later serves as a sad reminder of the ruthlessness that Africa has endured for centuries.