The Heroro-Nama Genocide: Germany’s Brutal Genocide in Namibia in the early 20th Century

The Herero and or Nama genocide was the murder and persecution by the German Empire of the Herero and Nama people of Namibia, in what has been described as the first genocide in the 20th century, by the close of the genocide, between 65,000 and 100,000 Herero and 10,000 Nama had been killed.

In the 19th century, Namibia, a country in southern Africa, was populated by several ethnic groups: the San, Damara, Ovambo, Nama and Herero. The Hereros were a pastoral people whose entire way of life centred on their cattle.

In 1884, Germany invaded the Namibian territory and founded the German South West Africa colony. In contrast to Germany’s other African possessions,the region offered little promise for large-scale mineral or agricultural extractions. Instead, South West Africa became Germany’s only real settler colony. By 1903 some 3,000 Germans had settled in the colony, primarily on the central high grounds.

Under German colonial rule, natives were routinely used as slave labourers, and their lands were frequently confiscated and given to colonists, who were encouraged to settle on them. Over the next decade, the land and the cattle that were essential to Herero and Nama lifestyles passed into the hands of German settlers arriving in South West Africa. 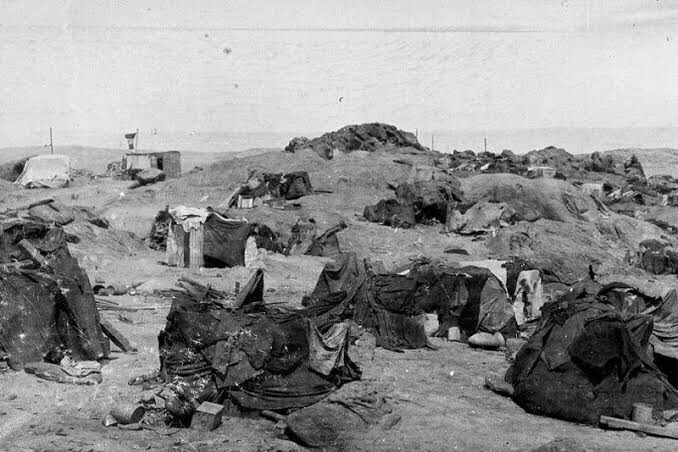 Herero women and girls also were routinely raped by German soldiers, a crime that the German authorities were reluctant to punish.

On the resentment the natives had for the germans, one missionary reported: “The real cause of the bitterness among the Hereros toward the Germans is without question the fact that the average German looks down upon the natives as being about on the same level as Baboons and treats them like animals. The settler holds that the native has a right to exist only in so far as he is useful to the white man. This sense of contempt led the settlers to commit violence against the Hereros.

On January 12, 1904, some group of Hereros who had gotten tired of being cheated and maltreated by the germans rebelled. Guided by their leader, Samuel Maherero, they attacked a German garrison at Okahandja.

The attack prompted the governor of the region Leutwein to request reinforcements and an experienced officer from the German government in Berlin. Lieutenant-General Lothar von Trotha was appointed Supreme Commander of South West Africa on 3 May 1904, arriving with an expeditionary force of 14,000 troops on 11 June.

On arriving, General Lothar von Trotha gave the order that all native Herero people needed to be exterminated to make space for German colonists. He specifically ordered that the soldiers show no mercy to women and children. 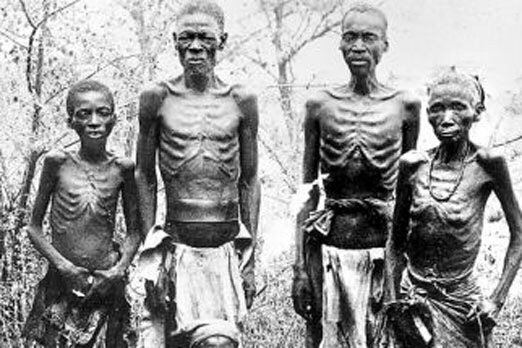 The order to kill all Herero was signed on October 2, 1904 by von Trotha:

“The Herero are no longer German subjects (…). Any Herero sighted within the [Namibian] German borders with or without a weapon, with or without cattle, will be shot. I will no longer accept women and children, but will send them back to their people or let them be slaughtered.”

The first phase of the genocide was characterised by widespread death from starvation and dehydration, due to the prevention of the Herero from leaving the Namib desert by German forces. Once defeated, thousands of Hereros and Namas were imprisoned in concentration camps, where the majority died of diseases, abuse, and exhaustion.

The intent of these killings was to rid the colony of people viewed as expendable and thus gain access to their land. 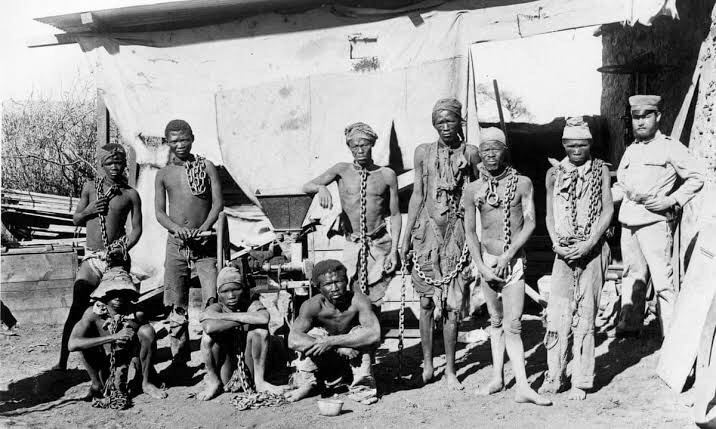 Herero who survived the desert were imprisoned in concentration camps and enslaved.

One missionary described a scene of an African woman lying on the ground and wasting away. When she asked for water from fellow prisoners, a German soldier shot her five times, outraged that she would have the audacity to ask for anything.

The prisoners on the island were forced into hard labour as slaves. Thousands of women were victims of sexual violence inflicted by German soldiers. They were given some rice for their efforts, but nothing more. Many died as a result of the poor diet and severely exhaustive work. 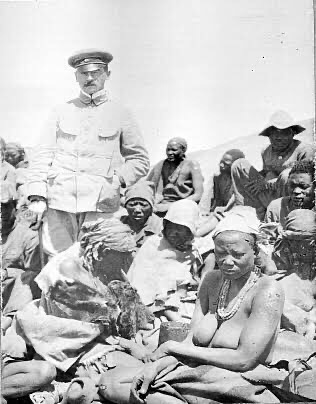 Dr. Eugene Fischer conducted medical experiments on children born from the rapes that occurred in the camp. His conclusion was that children born out of bi-racial unions were “inferior” to their German fathers.

Racist ideas developed in the colony were brought back to German institutions, where Fischer’s studies would eventually be read by Adolf Hitler. One of Fischer’s students, Joseph Mengele, later conducted human experimentation and sent people to their death in the Auschwitz gas chambers.

Another doctor named Dr. Bofinger living in Namibia also conducted experiments on the cadavers of these prisoners. He was known for decapitating the victims, preserving the heads, and sending them back to scientists living in Germany. More than 3,000 skulls belonging to the Herero and Nama people were sent back to Germany for further experimentation.

The captured women were forced to boil heads of their dead inmates and scrape remains of their skin and eyes with shards of glass, preparing them for examinations by German universities.

This work was performed at the camp at Swakopmund, and some of these experiments were conducted by the German doctors to develop their race theories about the evolutionary proximity of black Africans to apes.

The soldiers were so proud of their “conquest” that they would have friends document the experience by taking photos of the soldiers surrounded by starving African prisoners. Then the pictures were turned into postcards to send back home. Some postcards even had pornographic images of German soldiers raping African women.

The camps were dismantled in 1908, but the suffering did not end there. Both indigenous groups had lost most of their people and were further forbidden to own land, weapons, or cattle. A statement by the German military read: “The punishment has come to an end. The Herero had ceased to be an independent tribe.”

In 1918 the British authorities announced that about 74% of the Herero and Namaqua died within the concentration camps. Most of the dead were women and children.

The Herero and Nama people lost almost everything in this short space of time – their families, rights, property, income, dignity and freedom. 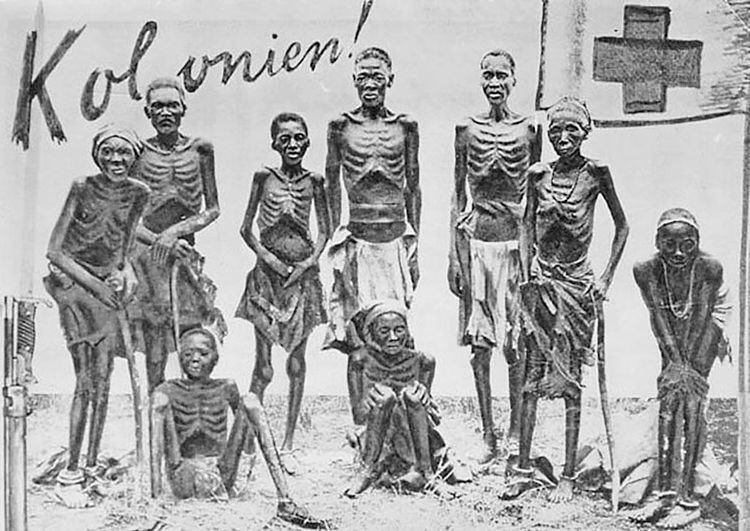 The colony was ruled by germany until 1915 when it was conquered by troops from the Union of South Africa. 75 years later, Namibia gained its independence from South Africa.

In 1985, the United Nations’ Whitaker Report classified what happened as an attempt to exterminate the Herero and Nama peoples of South West Africa, and therefore one of the earliest attempts at genocide in the 20th century.

In October 2000, the first official meeting between the Herero and the United Nations High Commissioner for Human Rights took place. The genocide was on the road to historical recognition. In 2004, the German government acknowledged its responsibility for the genocide of the Herero, without granting them financial compensation.

In October 2011, after three years of talks, germany repatriated the first 20 of an estimated 300 skulls stored in the museum of the Charité were returned to Namibia for burial. In 2014, 14 additional skulls were repatriated by the University of Freiburg.

Germany opened talks again with the Namibian government in 2015 on a “future-oriented reappraisal of German colonial rule.” It also signaled its readiness to make compensation payments.

In may 2021, Germany finally agreed to pay Namibia €1.1bn (£940m) as it officially recognised the Herero-Nama genocide at the start of the 20th century, in what Angela Merkel’s government says amounts to a gesture of reconciliation but not legally binding reparations.

Of the overall sum, more than a billion euros will go towards projects relating to land reform, rural infrastructure, water supply and professional training.

Communities of Herero and Nama descendants, which form ethnic minorities in all of the seven affected regions, are meant to be involved in the development of the specific projects.

Some €50m will go towards setting up a foundation for reconciliation between the two states, including cultural projects and youth exchange programmes.

The text of the joint declaration calls the atrocities committed by German troops a “genocide” but omits the words “reparations” or “compensation” – a move borne out of fear that such language could set a legal precedent for similar claims from other nations.

The Herero and Namaqua Genocide

The Forgotten Genocide: Herero and Nama, 1904, Part One