In a 2017 study that can be said to be incomplete because South Africa happen to be the only featured African Country in it. South Africans were ranked “The Most Ignorant in the World”.

Citizens of South Africa came out on top of the “Misperceptions Index” – a table which charts the 38 nations surveyed about the biggest concerns in their country. South Africans are seen as being the most ignorant of the lot, after a series of questions found that they tend to overestimate and misunderstand certain issues.

The dictionary definition of “ignorant” is what’s being applied here – meaning to have “a general lack of awareness or knowledge”. This study doesn’t imply that South Africans are rude or dumb in anyway..

What makes South Africans “ignorant”?
Of the 10 social issues analysed, South African perceptions are the worst in the following areas:

Murder rate
85% of people in South Africa believe the murder rate is higher than it actually is. Predictions averaged to be 29% higher than the actual figures.

Foreign-born prisoners
This sample size of South Africans believe that 50% of prisoners are foreigners, when in fact, that number is below 20%.

Teenage Pregnancy
South Africa ranks as highly as several Latin American countries when it comes to guessing the teenage pregnancy rate. Our participants incorrectly guessed that 44% of 15-19-year-olds are having children, whereas the actual figure is 4.4%.

Brazil, The Philippines, Peru and India make up the top five “ignorant” countries. The three least ignorant countries were all Scandinavian – Sweden came out on top, with Norway and Denmark emerging as the second and third most perspective countries respectively. 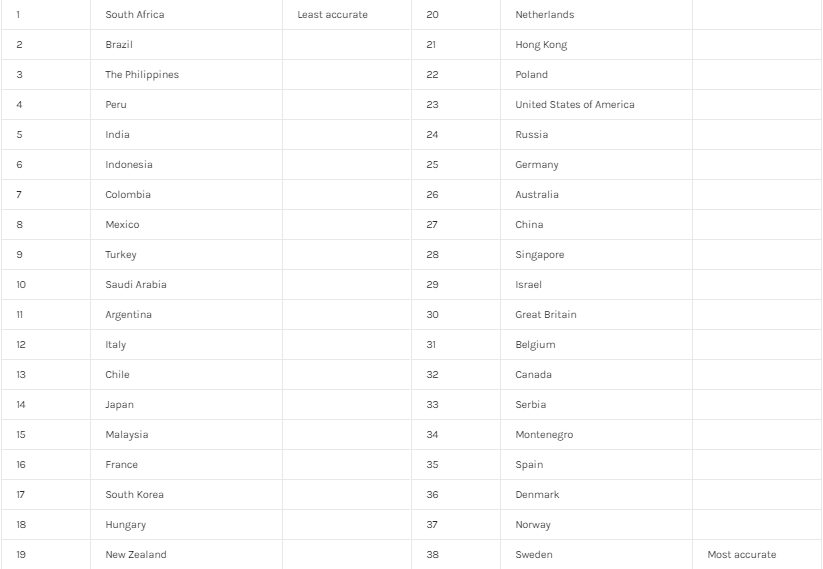 Previous article
People With Superior IQ All Have This In Common, Study
Next article
RIP Kofi Annan: Here Are 10 Fast Facts About Kofi Annan