A statue of British imperialist Cecil Rhodes has been decapitated in Cape Town in South Africa. 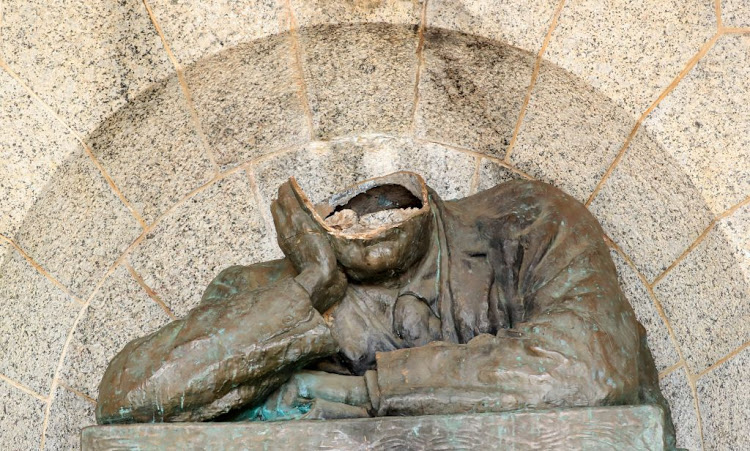 The bronze bust in a city park had its head removed with an angle grinder on Sunday night or Monday morning, South African National Parks said.

The bust housed at the top of a flight of steps at the Rhodes Memorial shows Rhodes with his arms folded. His right hand now cups what would have been his cheek — only with most of his face and head missing.

It is the latest monument associated with imperialism or slavery to be targeted since George Floyd was killed in US police custody.

His death triggered huge anti-racism demonstrations around the world.

Rhodes, a white supremacist, led the British colonisation of parts of southern Africa during the 19th Century and made a fortune from mining.

Completed in 1912, Rhodes Memorial consists of massive granite steps, flanked by bronze lions, and a rider astride a bronze horse at the beginning of the steps which leads to the top where the bust is situated. 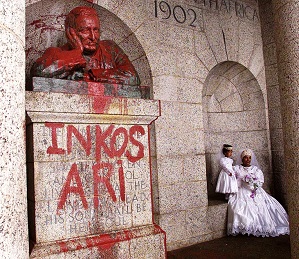 The statue had previously been targeted and was first vandalised in 2001, when red paint was splashed on it. In 2017 its nose was cut off, but was restored the following year.

Another statue of Rhodes, at the University of Cape Town, was removed in 2015 after it became the focus of protests against colonial-era leaders.

Who Was Cecil Rhodes

Rhodes was an imperialist, businessman and politician who played a dominant role in southern Africa in the late 19th Century, driving the annexation of vast swathes of land.

He founded the De Beers mining company in South Africa and also took control of territory in southern Africa that eventually became Rhodesia, now Zimbabwe. He believed that the English were the master race.

During his time as prime minister of the Cape Colony, from 1890 to 1896, his government effectively restricted the rights of black Africans by raising the financial qualifications for voting.