Madam C.J. Walker, born Sarah Breedlove, was the first self-made African American millionaire in the United States. She was a pioneering entrepreneur, philanthropist, and activist who dedicated her life to uplifting and empowering African Americans, particularly women. 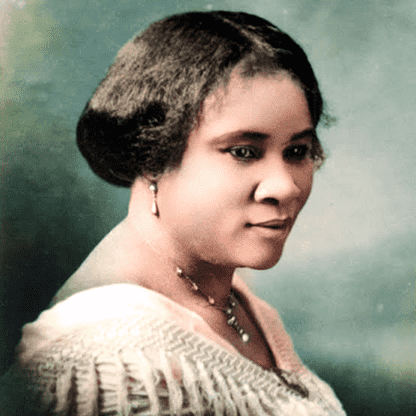 Sarah Breedlove was born on December 23, 1867, around Delta, Louisiana, to Owen and Minerva Breedlove, former slaves. She was the youngest of six children and the first in her family to be born free, thanks to President Abraham Lincoln’s Emancipation Proclamation.

After the death of both her parents, Sarah moved to Vicksburg, Mississippi, at the age of 10, where she lived with her older sister and her brother-in-law, Jesse Powell.

Sarah faced numerous challenges and struggles throughout her childhood and early adult life. She received little formal education and had to work as a washerwoman and laundress to support her family.

In 1882, at the age of 15, Sarah married Moses McWilliams and gave birth to a daughter, Lelia. Tragically, Moses died just a few years later, leaving Sarah to raise Lelia on her own. In search of a better life for herself and her daughter, Sarah moved to St. Louis, Missouri, where she married Charles Joseph Walker, a newspaper advertising salesman she met while working as a cook and a laundress. Through this marriage, which ended in 1912, she became known as Madam C. J. Walker. It was here in Missouri that she began to suffer from a scalp condition that caused her to lose her hair.

Determined to find a solution, Sarah, who at the time was working as a commission sales representative for Annie Malone, an African-American hair care entrepreneur, and owner of the Poro Company, started experimenting with various hair care products and eventually developed her own line of hair care products specifically designed for African American women. She named her company Madam C.J. Walker Manufacturing Company, after herself and her second husband, Charles Joseph Walker. 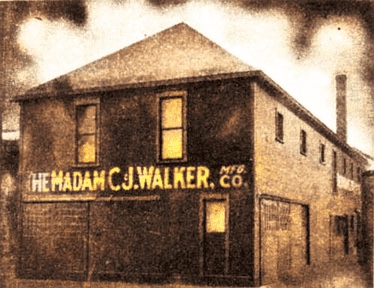 Madam C.J. Walker’s hair care products quickly gained popularity and her business began to thrive. She became a successful entrepreneur and the first African American woman to become a millionaire in the United States.

In addition to her hair care products, Madam C.J. Walker also offered a line of cosmetics and beauty products, including face creams, lotions, and perfumes. She believed that beauty was an important aspect of self-care and empowerment, and she worked to make her products accessible and affordable to all women.

Madam C.J. Walker’s business was not only successful, but it also served as a source of empowerment and opportunity for African American women. She hired and trained a team of sales agents, many of whom were African American women, to sell her products across the country. These sales agents, known as “Walker agents,” were given the opportunity to earn their own income and gain financial independence. They also served as role models and mentors for other women in their communities.

Madam C.J. Walker used her wealth and influence to give back to her community and support various causes. She was a philanthropist and an activist who worked to improve the lives of African Americans through education, social justice, and economic opportunities. She also used her platform to speak out against discrimination and to inspire other women to pursue their dreams and reach their full potential.

Madam C.J. Walker died on May 25, 1919, from kidney failure and complications of hypertension at the age of 51. Her net worth was estimated to have exceeded $1 million at the time of her death in 1919, according to Guinness world records.

After her death, her daughter, Lelia Walker, took over the management of the Madam C.J. Walker Manufacturing Company. Lelia continued to grow and expand the business, building upon the legacy of her mother.

Under Lelia’s leadership, the Madam C.J. Walker Manufacturing Company continued to thrive and became one of the most successful and well-known beauty brands in the country. Lelia also continued her mother’s philanthropic efforts, supporting various causes and organizations dedicated to improving the lives of African Americans.

Previous article
The Maji Maji Rebellion: How African Rebels Held Their Own Against Germans Colonialists for Two Years
Next article
Samuel Sharpe: The Enslaved Preacher Who Sparked a Rebellion on Christmas Day in Jamaica in 1831