The 22 Ugandans were killed on orders of Mwanga II, the Kabaka (King) of Buganda for their refusal to denounce Christianity. The Catholic Church beatified the Ugandan Catholic martyrs of its faith in 1920 and canonized them in 1964.

Mwanga ascended the Buganda throne at the age of 16 after the death of his father. After ruling the Buganda kingdom for a few months, he became increasingly suspicious of the Christian missionaries – who had gradually penetrated his royal courts – and saw them as the greatest threat to his rule.

His persecution of Christains took place at a time when there was a three-way religious struggle for political influence at the Buganda royal court. The episode also occurred against the backdrop of the “Scramble for Africa” – the invasion, occupation, division, colonization and annexation of African territory by European powers.

A year after becoming king he ordered the execution of Yusufu Rugarama, Makko Kakumba, and Nuwa/Noah Serwanga, who had converted to Christianity. Encouraged by his prime minister, on 29 October 1885 he also had an Anglican bishop James Hannington assassinated on the eastern border of his kingdom. This may have been deliberately intended to send a message to the British that he did not wish for them to make inroads in Uganda.

On hearing about the kings prosecution of Christains, Joseph Mukasa Balikuddembe, the Catholic major-domo of the court and a lay catechist and the chief staff of the royal servants, reproached the king for the killings, against which he had counseled him. Mwanga had Balikuddembe beheaded and arrested all of his followers on 15 November 1885.

The king then ordered that Lwanga, who was his chief page at that time to take up Balikuddembe’s duties. That same day, Lwanga and other pages under him sought baptism as Catholics by a missionary priest of the White Fathers; some hundred catechumens were baptized.

On a mission to cleanse his courts of those who worshipped the white man’s God, Mwanga ordered a general assembly of the court and interrogated all present to find out the Christians amongst them, when he did, he tried to make them renounce Christianity some did, but majority of them refused.

Still on a mission to cleanse his courts of those who worshipped the white man’s God, Mwanga ordered a general assembly of the court on 25 May 1886, where he condemned two of the pages to death.

The following morning, Lwanga secretly baptized those of his charges who were still only catechumens (a young Christian preparing for confirmation). Later that day, the king heared whispers of what Lwanga had done that morning so he called a court assembly and interrogated all present to find out the Christians amongst them, when he did, he tried to make them renounce Christianity some did, but the majority Led by Lwanga declared their fidelity to the Christian religion, So Mwanga did a bad, but perfectly understandable thing, he condemned them to death, directing that they be marched to the traditional place of execution. Three of the prisoners, Pontian Ngondwe, Athanasius Bazzekuketta, and Gonzaga Gonza, were murdered on the march there. 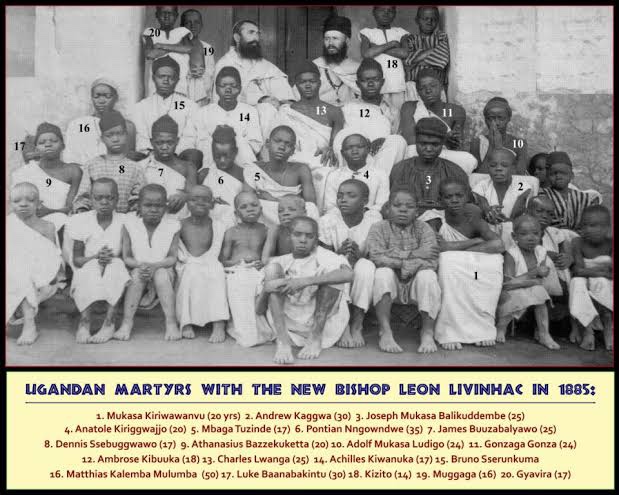 When preparations were completed and the day had come for the execution on 3 June 1886, Lwanga was selected first for execution for his role in converting and baptizing the pages under him.

Others were thrown into the furnace to burn with Lwanga after they refused to renounce Christianity, while those who renounced their faith were spared death.

In total twelve Catholic boys and men and nine Anglicans were burnt alive. Another Catholic, Mbaga Tuzinde, was clubbed to death and his body was thrown into the furnace to be burned along with those of Lwanga and the others.

The anger of the king was particularly inflamed against the Christians because he felt that they threatened the integrity of his kingdom. He also perceived that men such as Lwanga were working with foreigners in “poisoning the very roots of his kingdom”.

On the 6th of July 1897, exactly 11 years and 34 days after the brutal death of Lwanga and his followers, Mwanga declared war on the British. He was Defeated on 20 July and fled to German East Africa. He was declared deposed on 9 August. After a failed attempt to recover his kingdom, he was exiled in 1899 to the Seychelles. He died in 1903, aged 35. 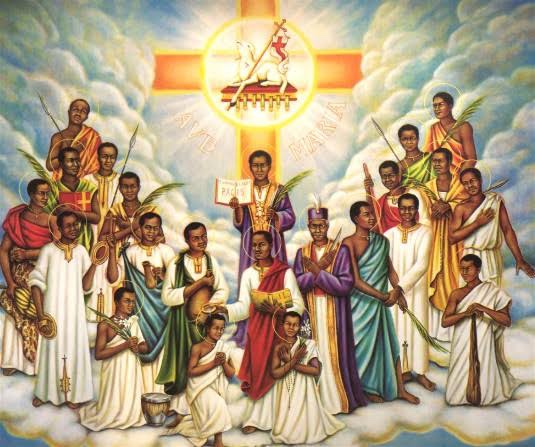 The Catholic Church beatified the Ugandan Catholic martyrs of its faith – who were burnt alive by King Mwanga – on 6 June 1920 and canonized them on 18 October 1964.

Also a feast day of Charles Lwanga and the twelve other catholics was fixed on June 3rd and is included in the General Roman Calendar.

The Basilica of the Uganda Martyrs at Namugongo was built in 1968. Since the 1980s it has become the venue of massive pilgrimages.

The Munyonyo Martyrs Shrine was also built in 2016 as a thanksgiving monument for their canonization.

Every year, on June 3, Christians from different parts of the world make their way to the two shrines in Namugongo to pray to Saint Lwanga.