Africa is the world’s fastest-growing continent for software developers

As tech ecosystems and hubs continue to sprout across Africa, an accompanying effect has been an upswell in local software engineering talent.

It’s proven enough for even global tech giants to notice: Microsoft is investing over $100 million to open its first development centers on the continent and employ 100 full-time African developers this year and grow its developer pool to 500 by 2023.

And the developer boom is showing no signs of slowing down. In GitHub’s latest annual State of the Octoverse report, developers from Africa created 40% more open source repositories on the software engineering marketplace over the past year—a higher growth percentage than any other continent globally. Among African countries with established developer communities (defined by GitHub as having more than 10,000 contributors to the platform), Morocco accounted for the most growth on the continent.

Notably, rapid growth in developer contributions is happening outside countries renowned for their large developer communities. Among countries with fewer than 10,000 contributors to GitHub, Mayotte and Guinea Bissau both recorded over 500% growth. It mirrors the emergence of tech hubs even beyond the legacy cities in Africa’s largest tech markets. 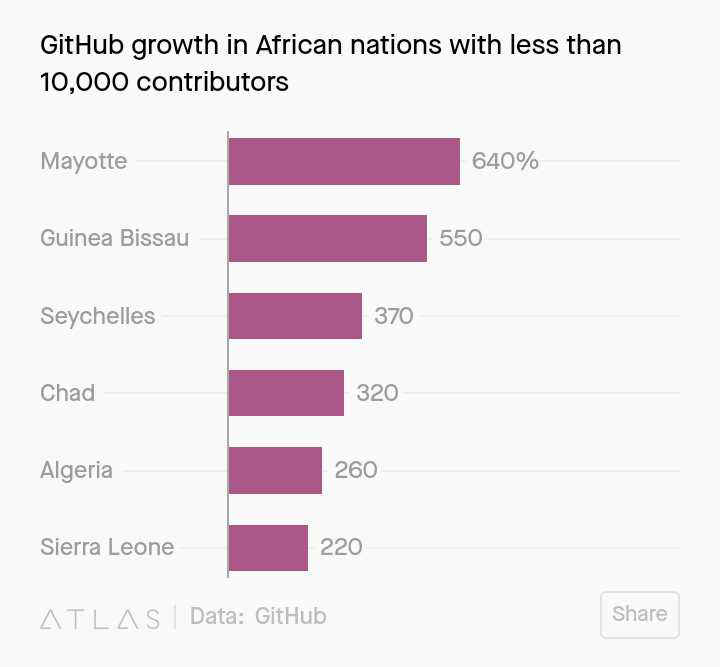 But while it first appeared promising, the model has now proven unsustainable thanks in part to the proliferation of other developer training and outsourcing companies that cater to US companies. In September, Andela let go of over 250 of its contracted junior developers in Lagos and Uganda as amid a major shift in its model to focus only on senior developers.

With hundreds of junior developers now on the market, one big question among industry insiders has been whether local tech ecosystems are large enough to absorb them. For their part, these developers have several options, from working remotely for foreign companies and platforms to moving to Europe as several Nigerian developers increasingly have. And if they choose to move elsewhere in Africa, South Africa, which ranks highest for pay packages offered to developers, will likely be top of the list.