Doctors in India’s Tamil Nadu has removed more than half kg of human hair and an empty shampoo packets from the stomach of a girl. 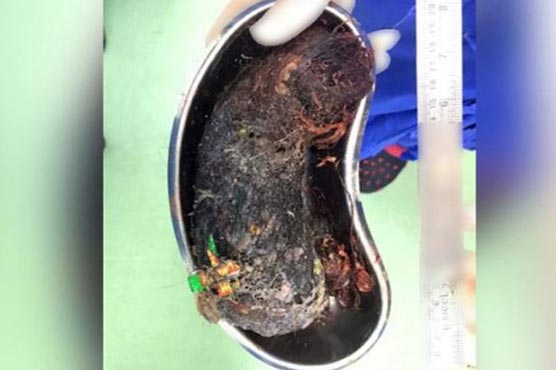 The 13-year-old girl had complained of stomach pain for the last few months after which, her parents took her to a private Hospital where a scan revealed a ball like object in her stomach Indiatoday reported.

Initially the doctors had chosen to remove it by endoscopy but when the attempt failed, they decided to operate on the girl to remove the foreign objects.

“The girl was mentally upset due to the death of a close relative, which led to her consuming objects like the empty packets and hair, which accumulated, resulting in frequent pain,” Surgeon Gokul said.

The girl appears to have been suffering from Pica.

Pica is a psychological disorder characterized by an appetite for substances that are largely non-nutritive.

People with the disorder pica compulsively eat items that have no nutritional value. A person with pica might eat relatively harmless items, such as ice. Or they might eat potentially dangerous items, likes plastic, dried paint or pieces of metal.

People with certain mental health conditions, such as schizophrenia and obsessive-compulsive disorder (OCD), may also develop pica as a coping mechanism.

But generally, the disorder occurs most often in children and pregnant women. And It’s usually temporary.

Previous article
The Top 4 “Diseases of Poverty” in Sub-Saharan Africa
Next article
Africa’s Most Stressed-Out Cities 2020: These African Cities have the Most Stressed Workers