Jack was a baboon who attained some fame for working as an assistant to a double leg amputee railway signalman in South Africa in the late 1800’s . 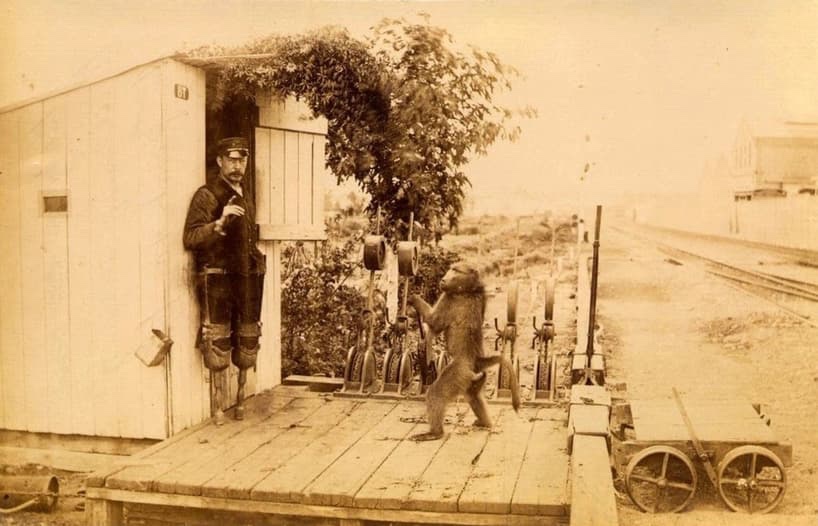 Jack was the pet and assistant of double leg amputee signalman James Wide, who worked for the Cape Town–Port Elizabeth Railway service. James “Jumper” Wide had been known for jumping between railcars until an accident where he fell and lost both of his legs. To assist in performing his duties, Wide purchased the baboon named Jack in 1881, and trained him to push his wheelchair and to operate the railways signals under supervision.

An official investigation was initiated after a concerned member of the public reported that a baboon was observed changing railway signals at Uitenhage near Port Elizabeth.

After initial skepticism, the railway decided to officially employ Jack once his job competency was verified. Jack was reportedly given an official employment number, and was paid 20 cents a day and half a bottle of beer weekly. It is widely reported that in his nine years of employment with the railway company, Jack never made a single mistake.

“Jack knows the signal whistle as well as I do, also every one of the levers,” wrote railway superintendent George B. Howe, who visited the baboon sometime around 1890. “It was very touching to see his fondness for his master. As I drew near they were both sitting on the trolley. The baboon’s arms round his master’s neck, the other stroking Wide’s face.”

After nine years of duty, Jack died of tuberculosis in 1890. Jack’s skull is in the collection of the Albany Museum in Grahamstown.