Ka’el Festival: the Unusual Ethiopian Festival Where Men Compete for the Title of Fattest Man

The Ka’el festival, in Ethiopia, is a plump festival where Ethiopian men from the me’en ethnic group compete to be the fattest in the village by drinking a mixture of blood, butter and milk while living in isolation for six months.

The ka’el festival is an annual event that’s organized by the Me’en people, a Surmic ethnic minority group inhabiting southwestern Ethiopia. Over time, the men in this area have developed a reputation for having the biggest bodies in the area, and have been nicknamed by their neighbors as “the Bodi.”

Ka’el, which translates as “fat men’s ceremony,” is the celebration of the traditional new year of the me’en people and occurs every year around June, four days after the first moon of the month.

The competition begins six months before the ceremony and every family is permitted to submit a single man for the contest, who, upon selection, retreats to his hut and is forbidden from exerting himself or engaging in sexual activity for the duration of the competition.

For six months, the contestants must adhere to a strict and regimented diet consisting of cow blood, butter, and fresh milk. Cows are considered sacred by the me’en tribe, so they are not killed; rather, blood is drawn by puncturing a vein with a spear or an axe and then sealing it with clay.

On the day of judgment, the now fattened men leave their huts and walk to the place of the ceremony with their bodies covered in white mud and ashes, wearing a headpiece composed of beads and feathers.

The actual ceremony entails hours of walking in a circle around a sacred tree, while being observed by the other men and assisted by the women who provide them with more milk drink and wipe away their sweat. The contestant with the largest swollen belly and firm buttocks is then declared the champion and is feted as a hero for the rest of his life.

Once the fattest man has been chosen, the ceremony concludes with the butchering of a cow using a big sacred stone. Then, village elders would examine the stomach and the blood to determine whether the year will be promising or not.

After the ceremony, the men’s lives return to normal, and after a few weeks of restricted eating, the majority of them lose their plump bellies.

Ka’el is unique in that it is the only competition to adjudicate based on fatness alone; there are no muscular men here – just men who have mastered their bodies to gain as much fat as possible. 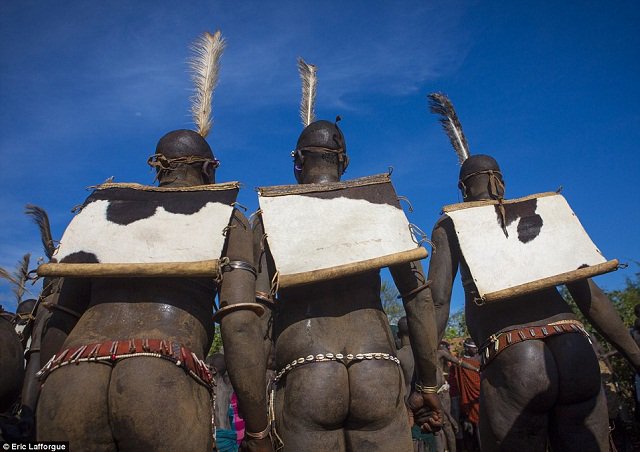 Previous article
François Mackandal, the Haitian Leader Who Was Burned Alive in 1758 for Rebelling Against French Colonial Authorities
Next article
How Enslaved Black Women Resisted Slave Breeding By Using Cotton Roots as Contraceptives