Ndaté Yalla Mbodj was the last great Lingeer (Queen) of Waalo (present day Senegal). During her reign, she and her husband Maaroso Tassé fought against the French colonialist army led by General Louis Faidherbe. 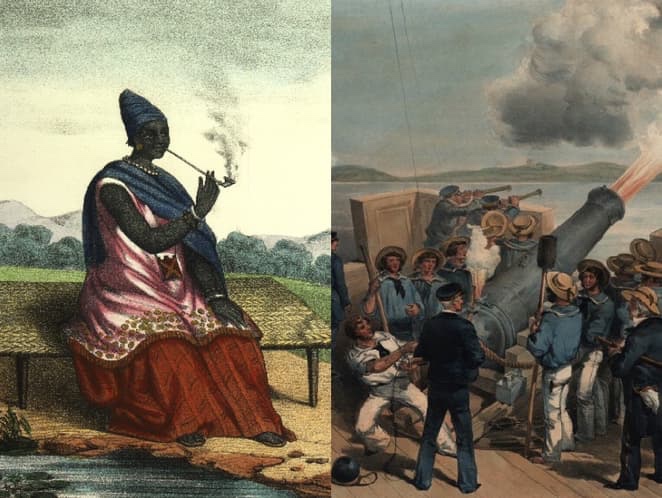 According to historians, Ndaté Yalla, was born in c. 1810, the youngest daughter of the King of Waalo, Brak Amar and Lingeer-Awo Fatim Yamar, they also produced an elder daughter named Ndjeumbeut Mbodj, who would later become Ruler of Waalo.

As young girls, Ndate Yalla and her sister, Ndjeumbeut were taught by their father – who was known for his patriotism and his anti-Islamic stance against the Senegalese Muslim jihadist – on how to rule a kingdom. They were also trained to defend themselves and would sometimes even train with the Waalo army.

In 1826, when Ndaté Yalla was around 16 years of age, she lost her father and was persuaded into marrying her cousin and new King of Waalo – Brak Yerim Mbanyik Tigereleh Mbodj; the marriage didn’t produce any offspring and didn’t last either.

Ndaté Yalla would go on to remarry after her husband’s death to Sakoura Barka Diop better known as Marosso Tassé Diop, the Prince of Cayor and Lord of Koki. Their union produced a son, Sidia Diop. 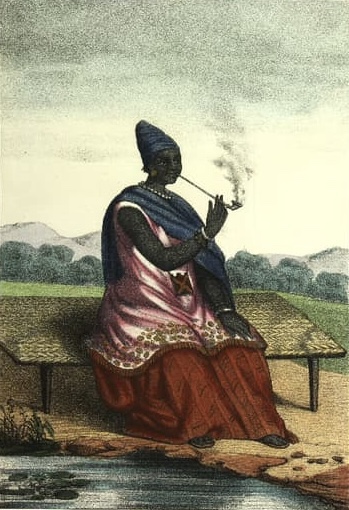 From the date of her reign, she made it a mission to veto everything the French wanted to implement in her kingdom that she believed was not in her interest.

In 1847, she opposed the French authorities over free passage for the Sarakoles (Soninkes) who supplied the French colony of Saint-Louis with cattle.

In a letter deposited at the Senegalese National Archives, the French claimed that, the Queen, going in contravention of the treaty that had existed between Waalo and Saint-Louis (Senegal), stopped a herd of 160 oxen that a french man residing in Saint-Louis had bought from some Sarakole merchants and kept 16 of the best livestock for themselves, allowing only 100 to pass.

The French went on to state that, the Queen can only be paid for passage after the goods have arrived in Saint-Louis. They then went on to threaten the Queen and asked that she return the 16 oxen which they say were in her possession, and if she refuse to do so she will be deemed an enemy. The Queen viewed the threat as an affront to her sovereignty and the sovereignty of Waalo. On 18 June 1847, she wrote a letter to the French governor in the following terms:

We have wronged no one. Walo belongs to us, that is why we guarantee the passage of livestock in our country. For this reason we charge one-tenth and we shall never accept any other thing. Saint-Louis belongs to the Governor, Cayor to the Damel, Djollof to the Bourba, Fouta to the Almamy and Walo to the Brak. Each of these chiefs governs his country the way he deems fit.

The queen and the governor of Saint-Louis would later resolve their issue and continued trading with each other but while the Queen moved on, the french governor didn’t and instead started working on a plan to conquer the Senegambia and bring to an end the six main Senegambian Kingdoms, including hers.

In January 1855, Queen Ndate learnt of the French plan to conquer not just her kingdom but the entire kingdoms that made up the Senegambia and bring to an end their respective royal dynasties, and out of vexation, the Queen sent a letter to French governor Louis Faidherbe, ordering him to evacuate the outskirts of Saint-Louis immediately. In response, the French gathered troops and local volunteers and departed from Saint-Louis in order to march on N’Der, the village of Queen Ndaté.

The French forces met with Queen Ndate’s army near a wood in the plain of Dioubouldou, not far from N’Der. Queen Ndaté’s forces had been waiting here for French.

Maaroso Tassé, the Prince of Cayor and Lord of Koki, and commander of the Waalo army, put up a strong resistance against the French but they still were no match for the French.

The French defeated the combined Waalo and Trarza armies and then entered Nder, which had been deserted by the Queen and her followers. The soldiers looted the deserted village, and then burned it down. Several nearby villages were also looted, and the French column eventually went back home to Saint-Louis with a large booty of over 2,000 cows and oxen, 50 donkeys and 30 horses.

Having been defeated, the Queen gave the following speech in front of her dignitaries:

Today we are invaded by the conquerors. Our army is completely routed. The army of Waalo, valiant warriors though they are, have almost all fallen to the bullet of the enemy. The invader is stronger than we are, I know, but should we abandon Waalo to the hands of foreigners?

In addition to their defeat, Queen Ndate’s young son was also taken hostage by the French, baptized a Christian and given a new name Lêon, and then sent to a French school abroad.

In-light of their defeat and the total humiliation of Waalo, Queen Ndate left for Cayor with her husband, there she was welcomed by her husband’s relatives.

The Queen’s village was soon rebuilt, but its importance greatly diminished following the exile of Queen Ndaté Yalla and the annexation of Waalo to the French colony of Saint-Louis.

Ndaté Yalla’s son Sidia would later request a return to his country and continued his parents’ anti-colonialist work by launching a campaign of attacks against the French until he was captured and exiled to Gabon in 1878.

Today, Ndaté Yalla Mbodj is regarded as a heroine in Senegalese history, and one of the most famous women of 19th century Senegambia.