The oldest surviving soldier of the Nigerian Army, Pa Adama Aduku has joined his ancestors at the age of 101. 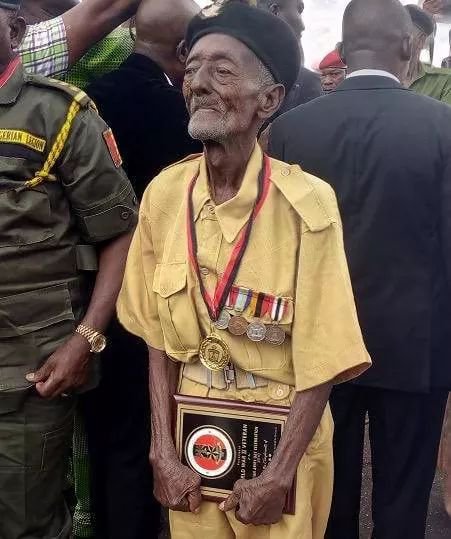 His death was announced by one of his relations on the WhatsApp platform of the Director Defence Information, Defence Headquarters news platform on January 1, 2020.

The old soldier who stole the show at the 2018, Nigerian Army Day Celebrations(NADCEL), held in Lagos, and was presented with an award of excellence by Vice President Yemi Osinbajo was born in 1918, to a peasant farmer at Abejukolo-Ife, at Omaha Local Government Area of Kogi State.

PA Aduku who joined the army in 1945 Revealed in a pulse interview that he made up his mind to join the military in 1942, because a soldier named Salikawa beat his village head.

“The man named Salikawa was a soldier who resorted to beating up our chief for refusing to carry his bag and seeing him off to his house, which was 10 miles away.

“When the matter was reported to the District Officer, the chief was advised to obey the soldier in his own interest or face whatever consequences that resulted from that.

“I was very angry and bitter and I made up my mind to join the military so that I could go back to the village and also beat up Salikawa for humiliating our chief.”

Two years after joining the army, Aduku said the new recruits were moved to Ibadan in preparation for Egypt en route India, where they were prepared to fight for the British Army in the Second World War.

Recounting the war experience, the centenarian said “In the course of that journey, we ran out of drinking water, so we had to rely on the water from the sea to drink despite it being salty. By the time we finally got to Egypt, we waited a bit before moving to Bombay in India and later to Kolkota also in that country for the war.

“While over there, we fought with Japan in an intense battle and we were able to defeat them. We also fought against enemies in Burma.”

Four years after joining the army, Aduku said his grandmother begged him to leave the army and he could not afford to turn her down.

While comforting the Family of Pa Adama and thanking them for the service of their patriarch we also appreciate our current men and women of the armed forces for their service and sacrifice to our great Nation.

Previous article
In Pictures: Beautiful Photos From Golibe Festival in Onitsha
Next article
Code Noir: The Decree that Once Regulated the Lives of African Slaves in French Colonies