The Mau Mau uprising, was a war in the British Kenya Colony between the Kenya Land and Freedom Army (KLFA), also known as the Mau Mau, and the British authorities that lasted for 8 years. The uprising is regarded in Kenya as one of the most significant steps towards a Kenya free from British rule. 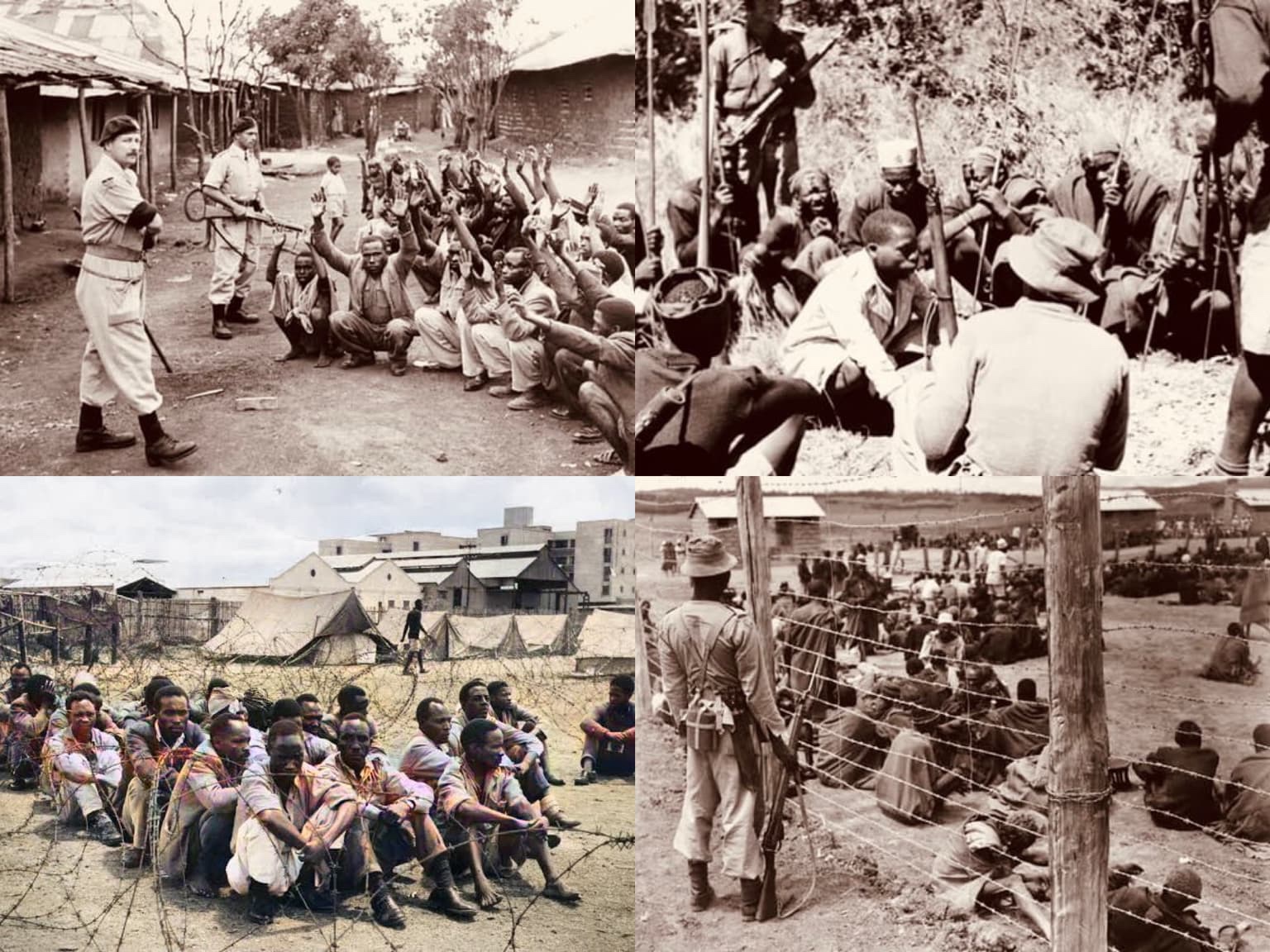 The armed rebellion of the Mau Mau was the culminating response to colonial rule. From the start, the land was the primary British interest in Kenya, which had “some of the richest agricultural soils in the world, mostly in districts where the elevation and climate make it possible for Europeans to reside permanently”.

Through a series of expropriations, the British colonial government seized about 7,000,000 acres of land, most of it in the fertile regions of Central and Rift Valley Provinces, later known as the White Highlands due to the exclusively European-owned farmland there.

By the 1930s, and for the Kikuyu in particular, land had become the number one grievance concerning colonial rule.

The Kikuyu mounted a legal challenge against the expropriation of their land, but a Kenya High Court decision of 1921 reaffirmed its legality.

The colonial government and white farmers also wanted cheap labour which, for a period, the government acquired from native Kenyans through force. This, coupled with the fact that most Kenyans were now squatters in lands that used to belong to them, prompted some Kenyan elites – one of whom was Jomo Kenyatta – to rebel against the government.

Around 1945, nationalists like Jomo Kenyatta of the Kenya African Union (KAU) started pressing the British government in vain for political rights and land reforms, with valuable holdings in the cooler Highlands to be redistributed to African owners but the government of colonial Kenya paid him no mind.

This prompted radical activists within the KAU to set up a splinter more radical group and named it mau mau. Their fighters were mainly drawn from Kenya’s major ethnic grouping, the Kikuyu. 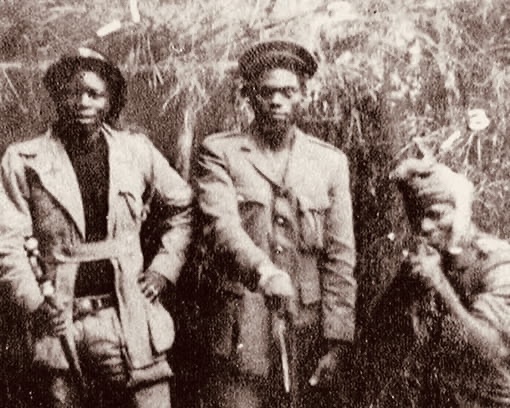 Many of those who joined the radical mau mau group were angry ex-soldiers who fought for the British in Ceylon, Somalia, and Burma during the Second World War but were never paid for their service when they returned to Kenya. One of those ex-soldiers was Barack Obama’s grandfather.

By 1952 Kikuyu fighters, along with some Embu and Meru recruits, were attacking political opponents and raiding white settler farms and destroying livestock. Mau Mau supporters took oaths, binding them to their cause.

The Mau Mau’s were smart and strategic but the British had more supporters, resources, and skilled fighters so they had the upper hand. The local police and the Home Guard, a government paramilitary force which was formed in response to insurgent attacks during the Mau Mau Uprising also fought on the side of British authorities.

In October 1952, the British retaliated by calling a state of emergency and began moving army reinforcements into Kenya.

They launched a counter-insurgency military operation which lasted until 1960 when the state of emergency was ended.

The British authorities rounded up over a thousand kikuyu’s who they suspected were in cohorts with the Mau Maus and had them hanged. The rest which included underage children, newborn babies, males, and females were kidnapped and put in detention camps where efforts were made to convert them to the political views of the government. One of the men they swept up was Obama’s grandfather Hussein Onyango Obama who according to guardian, was arrested probably on charges of membership of a banned organisation. 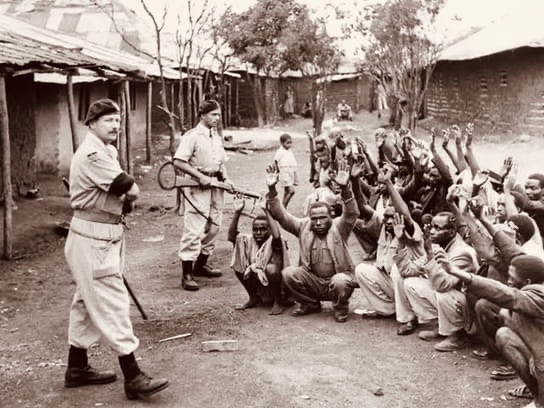 Survivors and perpetrators of the Mau Mau uprising have helped shed light on some of the horrifying actions meted to the detainees.

The detention center was covered with electrical barb wires and well-organized security making it impossible for detainees to escape. According to British authorities, 80,000 were interned, but Caroline Elkins, a professor of history and African and African American Studies estimated that between 160,000 and 320,000 were interned in detention camps also known as concentration camps.

According to the Times, Barack Obama’s grandfather was one of those imprisoned and tortured by the British in the camp. 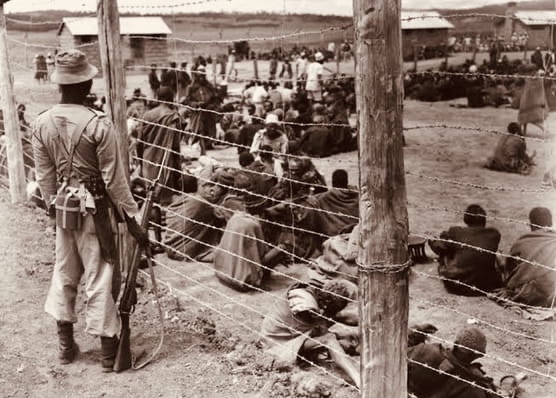 The Kenya Human Rights Commission has also said 90,000 Kenyans were executed, tortured or maimed during the crackdown, and 160,000 were detained in appalling conditions.

David Anderson, a professor of African Politics at Oxford University, says he estimates the death toll in the conflict to have been as high as 25,000.

He said: “Everything that could happen did happen. Allegations about beatings and violence were widespread. Basically you could get away with murder. It was systematic.”

Although most of the Mau Mau’s were victims of collective punishment. Thousands were beaten and sexually assaulted to extract information but detainees suffered more to force them to renounce their patriotism and supply information. 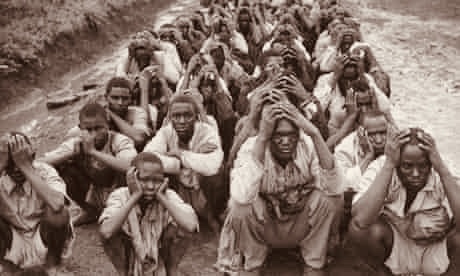 Prisoners were questioned with the help of castration, “slicing off ears, boring holes in eardrums, flogging until death, pouring paraffin over suspects who were then set alight, and burning eardrums with lit cigarettes” while also denying them access to medical attention. Hussein Obama “Barack Obama’s grandfather was amongst the detainees who suffered greatly. According to his widow, pins were forced down his fingernails and buttocks and his testicles squeezed between two metal rods.

According to another historian Robert Edgerton, “when questions were not answered according to the interrogation satisfaction, it led to more serious and violent torture. Electric shock was widely used, and so was a fire. Women were choked and held underwater; gun barrels, beer bottles, and even knives were thrust into their vaginas. Men had beer bottles thrust up their rectums, were dragged behind Land Rovers, whipped, burned, and bayoneted. Some officers didn’t stress over torture, they just shoot the suspect and ask the next to dig his grave. After that, they would ask if he was willing to talk. 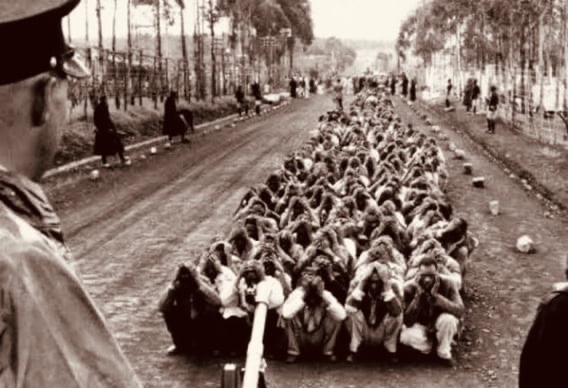 Author Wangari Maathai indicates in 1954 that every four out of three Kikuyu men were in detention and their lands which they once fought for were taken and given to collaborators. Home guards were known especially to rape women and detainees were pushed into forced labor.

Mau Mau militants were guilty of a lot of crimes too which the Kikuyu civilians suffered when the British retaliated. The most nefarious was the attack on the “loyalist” village of Lari, where the majority of the men were away fighting with the British Home Guard. The rebels killed more than 70, mostly women and children.

As years passed, the kikuyu’s were forced to move out of their homes and settle in the new Homes the British provided for them. These homes were more like fenced camps and the Kikuyu’s were plagued with famine and disease. These heavy-handed and vicious strategies employed in Nairobi and the countryside were effective in cutting off much of the material and logistical support for the forest fighters.

In early 1955, British forces began a series of sweeps through the forests in an attempt to drive out the remaining Mau Mau, who by now were suffering from a lack of food and ammunition.

The capture of rebel leader Field Marshal Dedan Kimathi on 21 October 1956 signalled the defeat of the Mau Mau, and essentially ended the British military campaign. 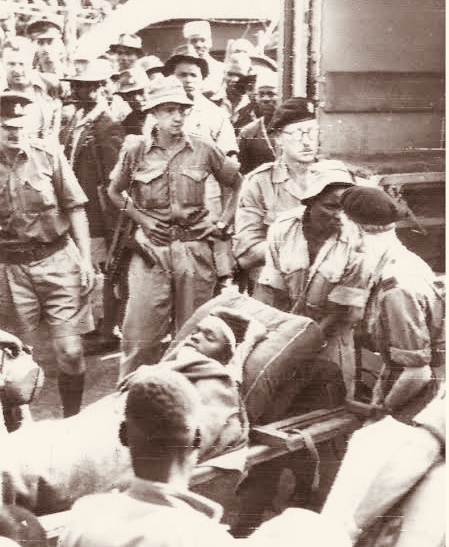 Following the rebellion, the British government did implement reforms. Three years later, in 1963, Kenya received its independence from Great Britain. One of the alleged Mau Mau leaders, Jomo Kenyatta, became the first president of the new nation.

In 2009, five elderly Kikuyu claimants filed suit against the British government in London’s High Court alleging systematic torture and abuse at the hands of British colonial agents in the detention of Kenya from 1954 to 1960.

The claimants alleged that their abuse was part of a larger system of mistreatment established during British counter-insurgency operations during the Mau Mau Emergency (1952-1960).

After four years of legal battle, the British government opted to settle the case in June 2013, and issued a formal apology on the floor of the House of Commons and paid nearly £20 million in damages.

The uprising which is one of the most violent and deadly revolt in the country’s history is today regarded in Kenya as one of the most significant steps towards a Kenya free from British rule.

Previous article
The Kidnap and Brutal Lynching of Mack Charles Parker in 1959
Next article
Tulsa Race Massacre: A White Mob Destroyed America’s Wealthiest Black Neighborhood On This Day In 1921