Thomas-Alexandre Dumas: the First Black General in the French Army 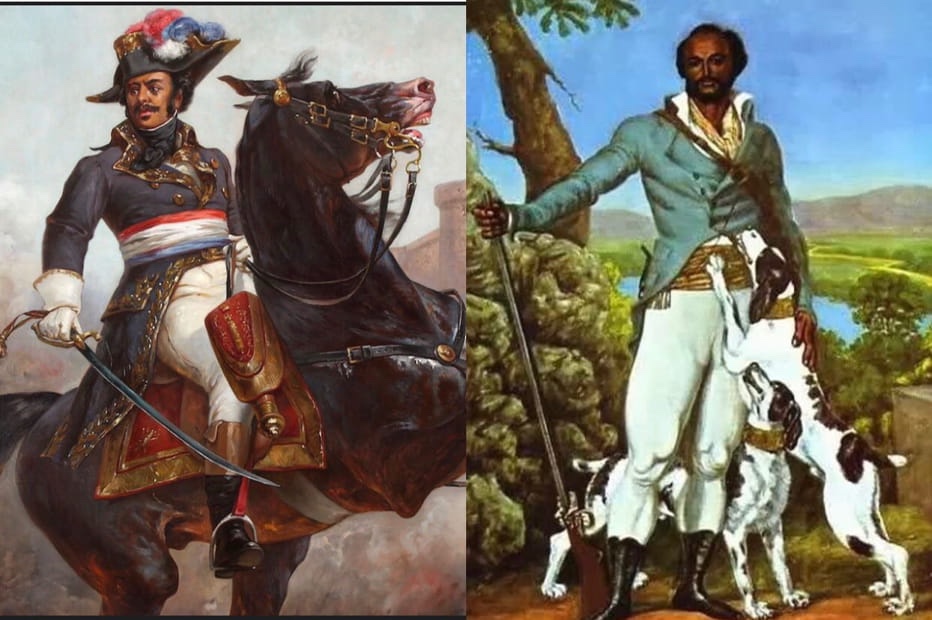 Thomas-Alexandre Dumas: the First Black General in the French Army

Thomas Dumas was born the son of a renegade French nobleman and his black slave in 1762 in the French sugar colony of Saint Domingue (now Haiti); at the time of his birth, his father was living on the run from the royal authorities in France and from his brother a rich planter who shipped sugar and slaves out of a Haitian area called “Monte Cristo”.

When Dumas was 14, his father sold him and his three siblings into slavery in Port-au-Prince, in order to raise funds to return to France and reclaim his inheritance and estate. Some months later, the father repurchased his son and had him sent to France in 1776 where slavery was illegal and thus any slave would be freed de facto by being in the country. 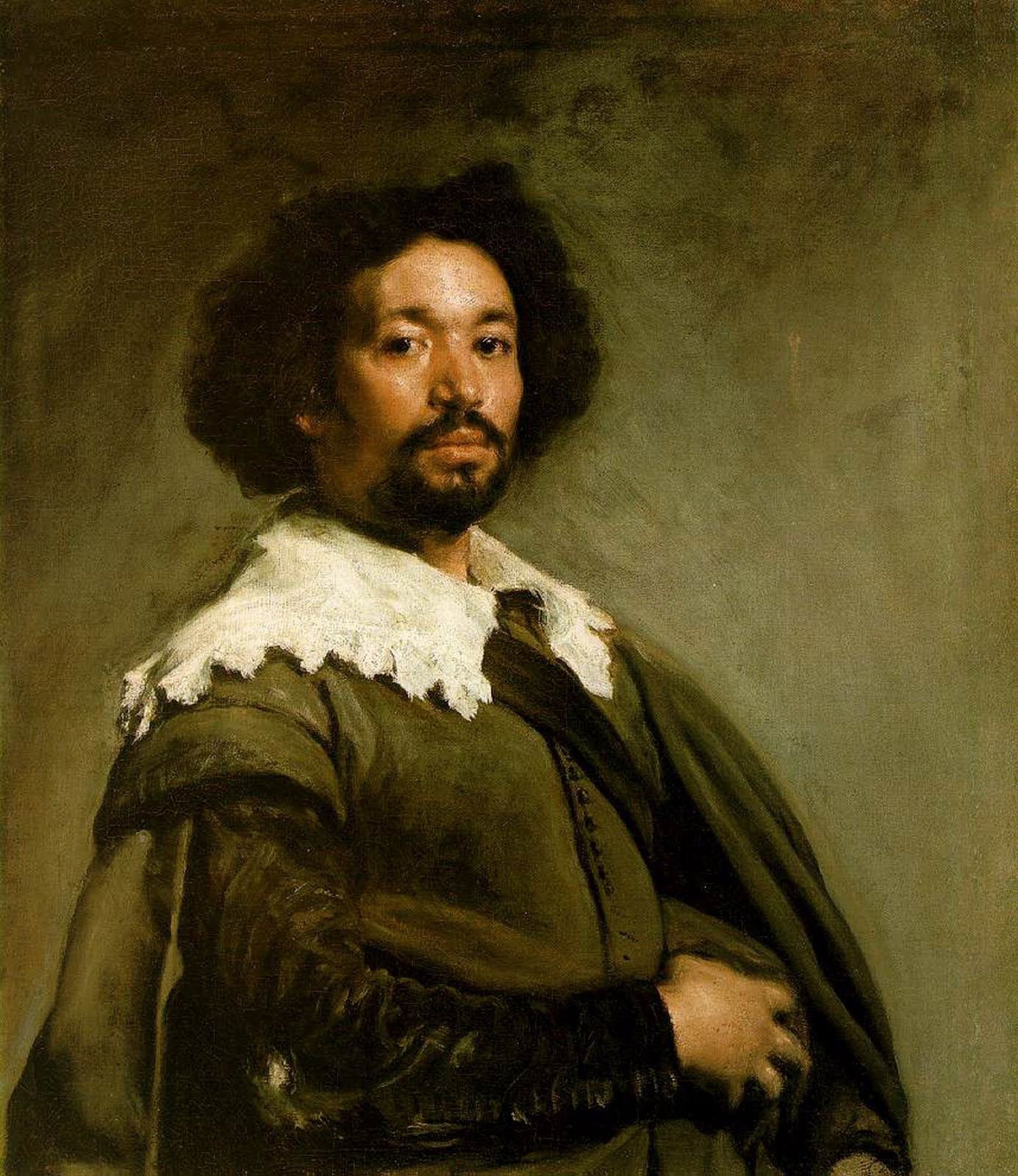 As a teenager in Paris, Thomas-Alexandre attended school and received an education in literature, sword fighting, military arts, and the fundamentals of 18th-century French aristocracy. When he was 24 he enlisted in the French military as a dragoon, taking his mother’s surname Dumas, and rose quickly in the ranks. During the French Revolution, he led a group of mixed-race swordsmen nicknamed the “Black Legion,” and he received citations from the new French Republic for various daring operations.

As he was given command of more troops, Dumas’s military actions and victories piled up.

By the time thomas was 32, he was in command of 53,000 troops as the General-in-Chief of the French Army of the Alps.

In 1798 General Dumas went to Egypt as the Cavalry Commander of the French Expeditionary Army of the Orient.

Dumas was instrumental in putting down an anti-French revolt that centered in the Grand Mosque of Cairo, by charging into the Al-Azhar Mosque on horseback. Afterward (according to his son’s account, drawn largely from the memories of Dumas’s aide-de-camp Dermoncourt), Napoleon told him: “I shall have a painting made of the taking of the Grand Mosque. Dumas, you have already posed as the central figure.”

In later years, Napoleon commissioned an artist to paint this historical victory but erased General Dumas and instead had himself painted entering the mosque. 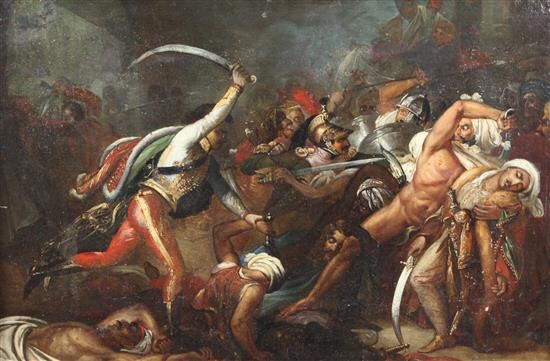 On the march from Alexandria to Cairo, Dumas who wasn’t afraid to speak his mind publicly confronted Napoleon about the motives of the expedition after a lengthy quarrel, Dumas left the Egyptian campaign to return to France but was captured at sea by enemies of france and kept in a dungeon for over two years without clearly understanding the motives or identity of his captors. 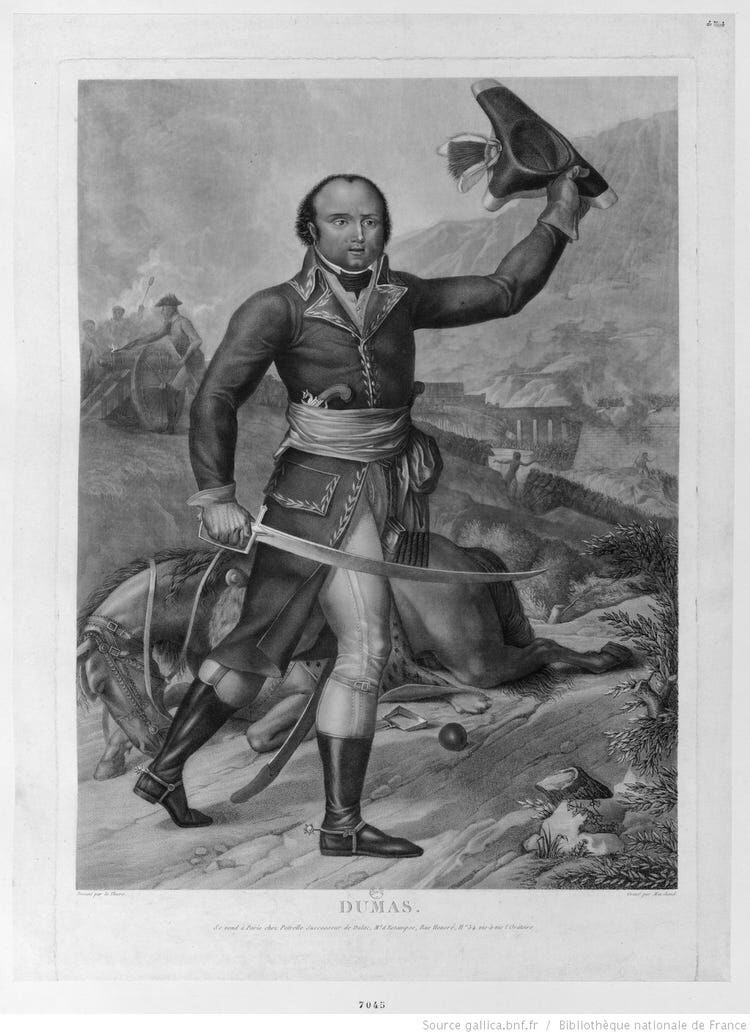 Returning to France after his release in the spring of 1801, he and his wife had a son, Alexandre Dumas, who became one of France’s most widely read authors of all time. Alexandre Dumas Junior’s most famous characters were inspired by his father’s life. 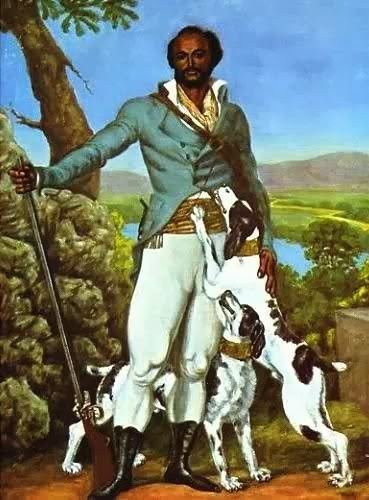 Less than a year after Dumas reunited with his wife and exactly two months after the birth of his Alexander, Napoleon who had seized power in 1799 coup passed the Law of 20 May 1802 – which effectively restored slavery, which had been abolished in 1794 in all the French colonies following the Revolution. In this new France black and mixed-race officers were effectively demoted to chain-gang labor, the integrated schools of Paris were closed, and even General Dumas’s marriage to a white Frenchwoman was made illegal.

After he gained release in 1801, Dumas was not awarded “the pension normally allocated to the widows of generals” by the French government and he struggled to support his family after his return to France. He repeatedly wrote to Napoleon Bonaparte, seeking back-pay for his time lost in captivity but napoleon never replied any of his letters.

Dumas also never received another military command, despite repeated requests for one. He died of stomach cancer on 26 February 1806 at the age of 43 leaving behind his three-years-old son Alexandre and his widowed mother in deep poverty

Before his death, he would tell his young son, Alexandre Dumas, stories about his adventurous and heroic days. That son grew up to become a renowned and celebrated author of “The Three Musketeers” and “The Count of Monte Cristo.”

The Black Count: Glory, Revolution, Betrayal, and the Real Count of Monte Cristo by Tom Reiss

Previous article
Forbes: These Are the Richest People In Nigeria, 2023
Next article
Larabanga Mosque: the Oldest Mosque in Ghana Is over 600 Years Old