. Nigerian music star, Tiwa Savage, has just won the Best African Act title at the 2018 MTV Europe music awards which held at the Bilbao Exhibition Centre, Bilbao Spain. She is the first African female to win the award 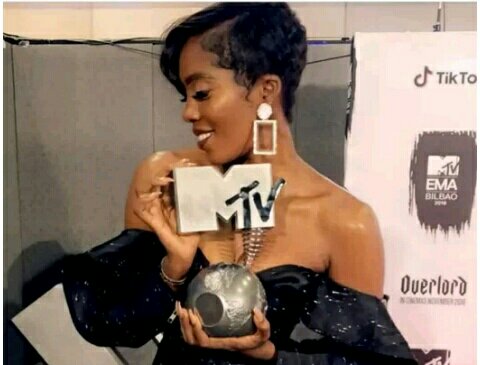 Nigerian music star, Tiwa Savage, has just won the Best African Act title at the 2018 MTV Europe music awards which held at the Bilbao Exhibition Centre, Bilbao Spain. She is the first female to win the award..

Tiwa Savage beat the likes of Fally Ipupa, Davido, Shekhinah, and Distruction Boyz to win the prestigious award at a ceremony held at the Bilbao Exhibition Centre – Bilbao in Spain.

Tiwa is undeniably one of the top female artists in Nigeria having worked with the several top acts both in Nigeria and globally.

Tiwa’s musical career began in 2010 with her then hit ‘Kele Kele love,’ and since then her musical journey has been nothing short of successful. She has had the great opportunity of performing in some of the biggest stages globally and has received various nominations for her great work through the years.

The artist recently signed to Jay-z‘s record label Roc Nation, and she is the first Nigerian artist to become a part of this record label.

Currently she is the queen of Afro-beats

MTV Europe Music Award is an award presented to honour artists and music in pop culture. It was originally conceived as an alternative to the MTV Video Music Awards, which are hosted annually in the United States. The Europe Music Awards are held every year in a different country; it has been hosted mostly in the United Kingdom. The annual presentation ceremony features performances by prominent artists, and the presentation of those awards that have a more popular interest