Nollywood, the Nigerian film industry, has seen significant growth in recent years, with many films breaking box office records. Here is a list of the top 15 highest grossing Nollywood movies of all time: 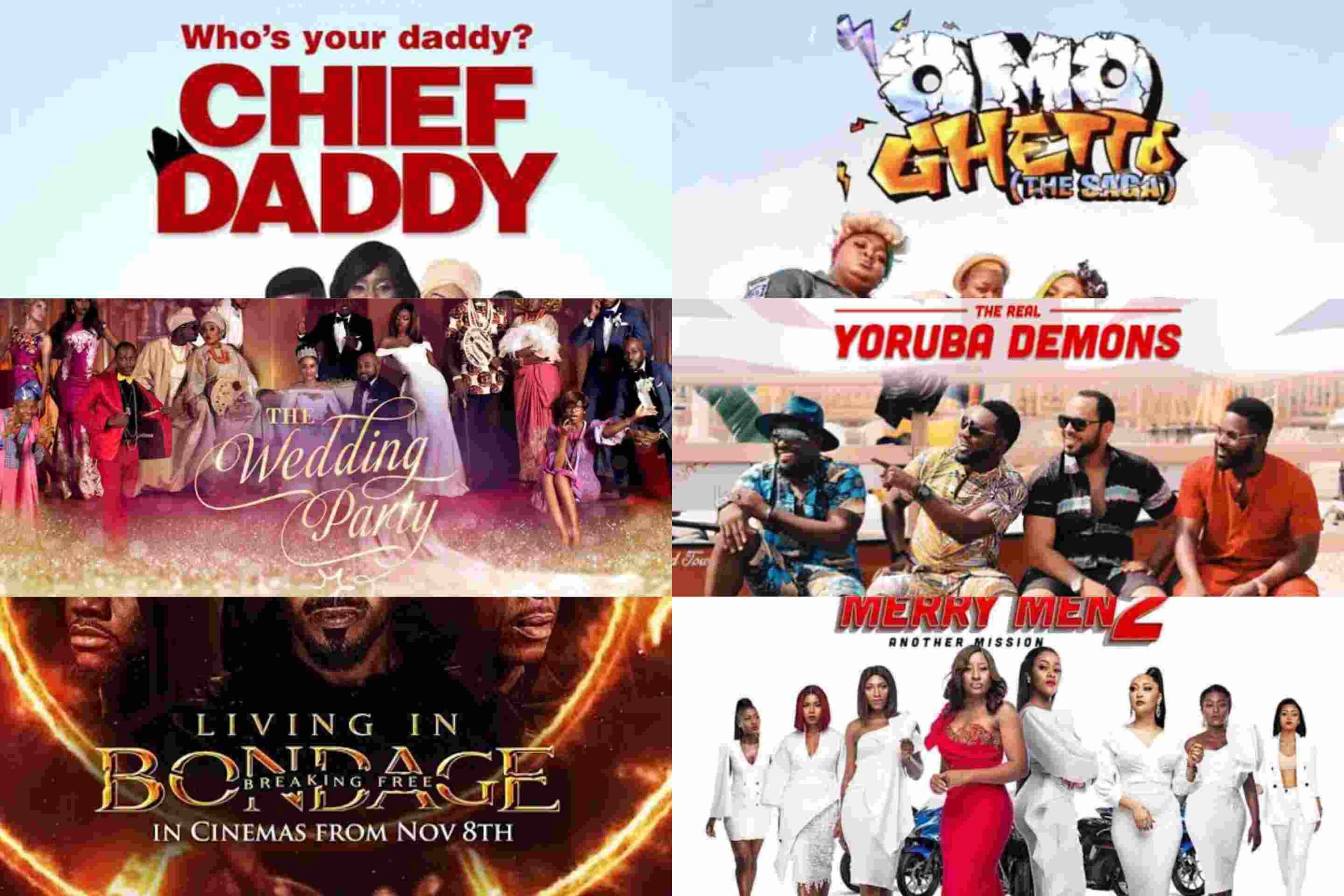 Omo Ghetto: The Saga is about Twins are reunited as a good-hearted female gangster and her uptight rich sister take on family, crime, cops, and all of the trouble that follows them.

Battle on Buka Street is a 2022 Nigerian comedy drama film directed by Funke Akindele and Tobi Makinde. The film is jointly produced as a collaboration between Funke Ayotunde Akindele Network (FAAN) and FilmOne Entertainment. Buka is currently the second Highest Grossing Nollywood movie of all time.

The plot revolves around the battle between two women who confront each other in a food challenge in order to win the prestigious ‘King of Buka Street’ which is a title conferred to the best local food seller in the region. 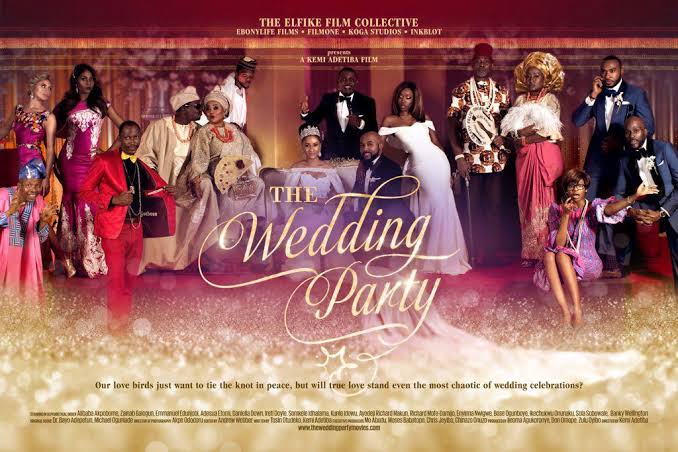 The Wedding Party is a 2016 Nigerian romantic comedy drama film, a collaboration between Ebonylife Films, FilmOne, Inkblot Production, Koga Studios, and is directed by Kemi Adetiba.
It is currently the third Highest Grossing Nollywood movie of all time.

The entire plot revolves around a Yoruba bride and an Igbo groom and all the drama that unfolds on their wedding day.

This 2017  romantic comedy drama film was directed by Niyi Akinmolayan. The Wedding Party 2 is a sequel to the Wedding Party which was released in December 2016. It is currently the fourth highest grossing nollywood movie of all time.

The movie focuses on Dozie’s (Banky Wellington) elder brother, Nonso ( Enyinna Nwigwe), who has continued his romance with Deardre (Daniella Down), Dunni’s (Adesua Etomi) bridesmaid. Nonso takes Deardre on a date in Dubai and proposes marriage by accident. After a disastrous traditional engagement ceremony in Lagos, Nonso’s family and Deardre’s aristocratic British family reluctantly agree to a wedding in Dubai. 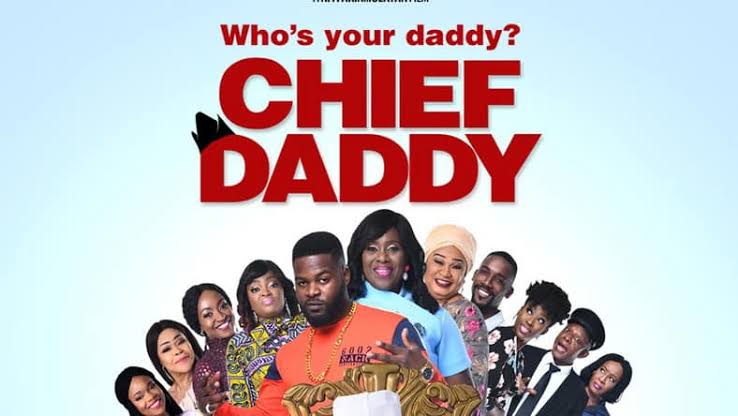 Chief Daddy is about a billionaire industrialist, Chief Beecroft, who serves as a benefactor to a large extended family of relatives, household staff and mistresses. He dies suddenly and his will creates a saga amongst his extended families.

Twin brothers, Wale (Falz) and Akin (Tobi Bakre) are orphaned when their parents are killed on New Year’s day on their way home from crossover church service. After years of fighting to survive on the streets of Lagos, the brothers fall on opposite sides of the law with Wale joining the police force and Akin joining a notorious gang of robbers. 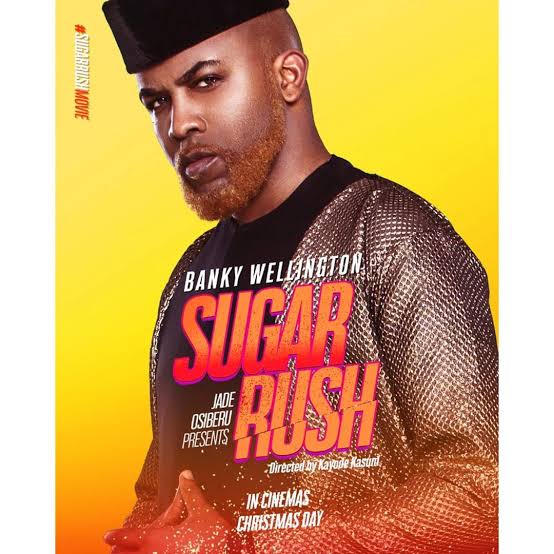 The Sugar Sisters discover a whopping $800,000, the financial crimes commission and the supposed owners of the money come for them. Now they team up with unlikely allies and it’s a race against the clock to set things right.

Christmas in Miami is the fourth instalment of the Akpos Nollywood film series . Following on from his rib cracking and havoc wrecking adventures, this time Akpos jets off with his family to the exotic city of Miami, Florida to represent Nigeria at the Intercontinental Christmas Fiesta.

King of Boys follows the story of Alhaja Eniola Salami, a businesswoman and philanthropist with a checkered past and a promising political future. She is a pillar of society – loved by many, feared by most, and truly known by a select few. 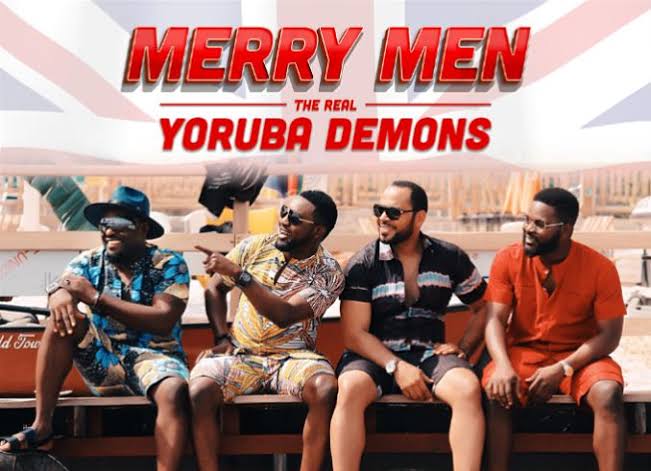 The film is set in Abuja. Four rich men (the Merry Men) seduce powerful women, get contracts from the political elite, steal from the rich, give to the poor and have sex with the hottest women in town. They face their biggest challenge yet when they antagonize a notorious and corrupt politician who plans on demolishing a village to build a shopping mall. The four men scheme to save the poor people of the village. 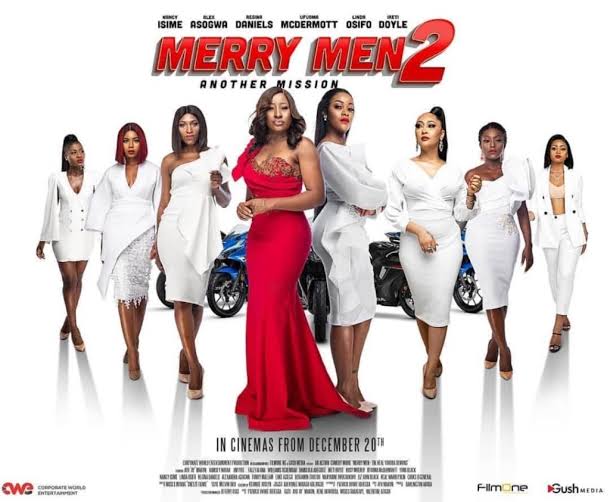 Merry Men 2: Another Mission is a 2019 Nigerian crime action comedy film and a sequel to Merry Men: The Real Yoruba Demons.

To save a kidnapped loved one, a pack of wealthy men must return to their vigilante past when they are blackmailed to pull off a treacherous heist.

Ijakumo (The Born Again Stripper) is a 2022 suspense thriller film produced by Toyin Abraham. It was released in theaters on December 23, 2022. The cast includes Toyin Abraham, Kunle Remi, Lolade Okusanya, Bimbo Akintola, Olumide Oworu, Lillian Afegbai among others. The screenplay was written by Kehinde Joseph and it was directed by Adebayo Tijani.

Ijakumo (The Born Again Stripper) tells a story of Asabi (Toyin Abraham), daughter of a powerful spiritualist who is hell bent on destroying the life of her ex lover, a now renowned pastor who cheated her and left her to die.

Your Excellency is a 2019 political satire drama comedy film written and directed by Funke Akindele on her directorial debut. The film stars Akin Lewis and Funke Akindele in the lead roles. The film is the fourteenth highest grossing nollywood movie ever.

A bumbling billionaire businessman and failed Presidential candidate Chief Olalekan Ajadi (Akin Lewis) is very much obsessed with US President Donald Trump. Just when his political campaign looks on the verge of another flop disaster, Ajadi is anointed by a majority party and becomes a tough credible contender with the assistance of powerful social media. 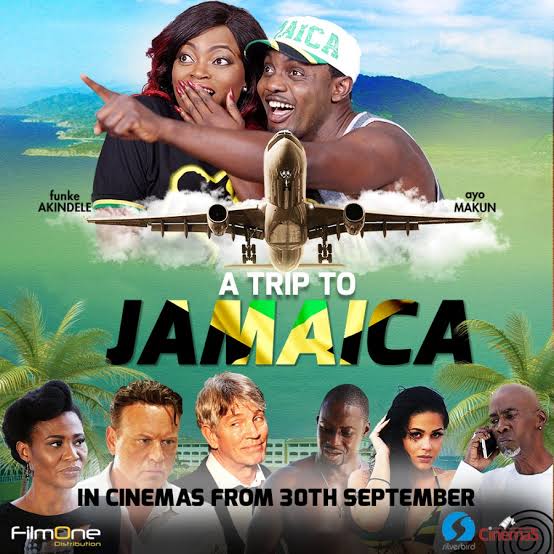 Written and produced by AY Makun, A Trip to Jamaica was directed by Robert Peters, and stars Funke Akindele, Chris Attoh, Nse Ikpe Etim among others.
The movie is the fifteenth Highest Grossing Nollywood Movie of all time.

The film tells a story about the adventures of a newly engaged couple in their relatives residence outside Nigeria, and how the secrets of their host led to the eventual breakup of their union amidst the culture shock of the new country and living with upper-class citizens.