A creation myth is a symbolic narrative of how the world began and how people first came to inhabit it. They describe the ordering of the cosmos from a state of chaos or amorphousness. They often are considered sacred accounts and can be found in nearly all known religious traditions on earth. 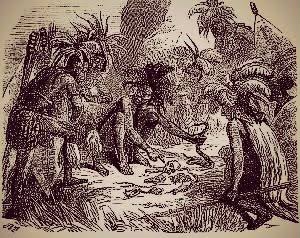 Creation myths develop in oral traditions and therefore typically have multiple versions; found throughout human culture, they are the most common form of myth. There are, therefore, almost as many creation myths as there are human cultures.

Creation Myth of the Zulus

Unkulunkulu is the Supreme Creator of the Zulu people, a large ethnic group in South Africa.

Unkulunkulu—sometimes called uKqili, ‘the wise one’—is a self-originating deity. The Zulu describe him as uZivelele, ‘he who is of himself’. Having ‘come into being, he went ahead and created everything, from land and water to animals and man.

All humans are derived from him and from his design and plan. He also gave humans their social institutions, such as marriage and chieftainship. In addition, he gave them spirits diviners to discover the past and the future, and doctors to treat various diseases. He also taught the Zulu how to hunt, how to make fire, and how to grow food.

With the arrival of Christian missionaries, Unkulunkulu became the name for the Christian supreme being.

Previous article
Bo-Kaap, The Most Colorful Neighborhood in Africa
Next article
Best Countries in Africa, 2022