You think you’ve seen weird, wait until you read these 5 Most Bizarre Cultural Practices From Around Africa.

Of all the traditional ceremonies of the bodi tribe of Ethiopia, none is more fascinating and weird than the “Ka’el” festival which means “the holiday of the fat men”.

In the ka’el cultural festival, Bodi men compete to be the fattest in the village by drinking a gruesome mixture of blood and milk while living in isolation for six whole months. The winning fat man doesn’t get a prize but is crowned a hero for life by the rest of the tribe. 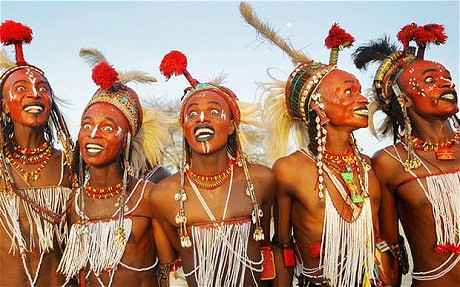 The Wodaabe Tribe is a small subgroup of the Fulani ethnic group and can be found in the Northern parts of Nigeria as well as northeastern Cameroon, southwestern Chad and the western region of the Central African Republic.

The Wodaabe have a festival called the Gerewol Festival’ the bizarre cultural practice involves the members of the tribe both male and female dancing at night, while at the same time allowing the men of the tribe to steal any woman of their choice. It doesn’t matter if the woman is married or not, the tribe recognizes the new union as a legitimate marriage except on the grounds that the woman refuses or her husband tackles the man while he is trying to steal the woman. The chewa’s are a bantu people of central and southern africa and the largest ethnic group in malawi.

Internationally they are mainly known for their masks and their secret societies, “Nyau”, but they also have a weird burial practice.

When a Chewa dies, his relatives take the dead body to a sacred place, take a knife and slit the throat open. They then pour water through the corpse to clean its bowels of all filth by squeezing the stomach to let it all out through the rear. They only stop once the water is clean. And no they don’t throw the water away.., they use that same water to cook a meal for the whole tribe.

Magun is a very popular cultural but diabolic practice in western Africa and also some parts of east Africa.

Literally translated to mean “do not climb” in English Language, this bizarre cultural practice is done with black magic by any man who suspects his wife of infidelity, it entails him rubbing a concoction given to him by a diabolic priest on the body of his wife without her knowledge.

In any event that the woman sleeps with another man other than her husband, the magun makes the man’s genitals to get stuck in the woman’s. (Funny but true).

The Magun is so powerful that the man try as hard as he may won’t be able to separate himself from the woman. Atleast not until the woman husbands arrive the scene. The practice, referred to as “Okujepisa Omukazendu”, is common among Ovahimba and Ovazimba tribes in the Kunene and Omusati regions, a nomadic tribe in Namibia.

The phrase, ‘Okujepisa Omukazendu’, literally means, ‘offering wife to a guest’. It is a bizarre cultural practice, whereby a man decides to please a friend or a highly esteemed guest by allowing him sleep with his wife.