António I of Kongo, the African King Who Was Beheaded for Refusing to Cede His Country’s Mines to Portugal

António I of Kongo (António I Nvita a Nkanga) was a King of the Kingdom of Kongo who ruled from 1661 to his defeat and death at the Battle of Mbwila on October 29, 1665. 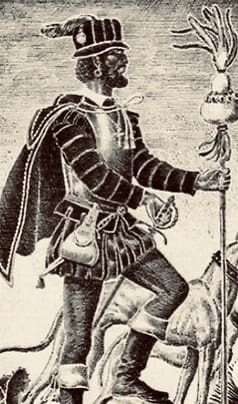 António I Nvita was born approximately in 1617, to the house of Kinlaza/Nlaza kanda. His uncle, King Garcia II Nkanga, who ruled the Kingdom of Kongo from 1641 to 1661 is today considered by some to be Kongo’s greatest king for his near expulsion of the Portuguese from Kongo.

António was declared heir to the throne in the mid-1650s, when his cousin, Crown Prince D. Afonso was sentenced to death for conspiring against the king.

He was elected in 1661 following the death of King Garcia II. Like his uncle, António I pursued a foreign policy focused on removing the Portuguese from his region.

After ascending the throne, António revoked an arrangement the Portuguese had with the previous king that ceded control of Island of Luanda, all lands south of the Bengo River, and the rights to all mines in Kongo to the Portuguese.

After trying to strong arm António into ceding the lands back to Portugal to no avail.

On December 22, 1663, Alfonso VI of Portugal ordered the governor of Luanda, Vidal Negreiros, to take control of the Kongo copper mines, exploit the deposits and send the ore by ship to Lisbon. António I of Kongo responded by proclaiming that he “is in no way indebted to the King of Portugal”. The army of the two countries would later meet in Mbwila, along the Ulanga River.

The Portuguese army were made up of soldiers recruited from the colony of Brazil, and also African natives numbering about 13,000 all armed with modern weapons.

While that of Antonio I included a large number of peasant archers of about 15,000, 5,000 heavy infantry equipped with shields and swords, and a musket regiment of 380 men.

At the Battle of Mbwila, the Kongo suffered their worst military defeat. This resulted in the death of thousands, which included King António who was decapitated during or shortly after the battle. His sceptre and silver crown with gold stones which was used in coronation of kings in congo were taken to Portugal as war trophies.

The Portuguese also moved in and took over the mines in Luanda.

At the end of the battle, the Portuguese side had a casualty of 12 whites and 25 blacks killed and more than 250 injured. On the Congolese side, however, it is estimated that the death toll was more than 5,000 people. Many close friends and family members (including Ganga Zumba) of the king were also captured.

King António died with no heir apparent. Many of the men who could have taken his place died or were captured at the battle if mbwila. The ruling House of Kinlaza and the opposing House of Kimpanzu fought furiously over the throne causing a devastating civil war. The peak of the Kingdom of Kongo was at an end, and it would take forty years for the kingdom to be reunited.

Previous article
Forbes: Richest Men in Egypt (2023)
Next article
Nat Turner, the Preacher Who Led a Slave Rebellion in Virginia in 1831